George W. Bush: An insult to our collective intelligence

Let us compare for one instant the Presidents of the Russian Federation and the United States of America. On one side, we have a President whose policy is directed towards improving relations with the international community in a climate of friendship and peace (principles which guided the foreign policy of the USSR) and in tandem with the norms of international law as stipulated by the UNO. On the other, a roving cowboy, taming the wilderness with his gun and his Bible, with an absence of tact and diplomacy. 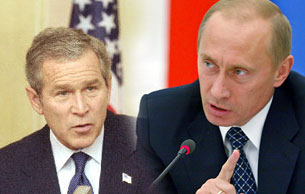 Diplomacy, debate, dialogue and discussion are the basic precepts of democracy, a word much referred to by the USA but unfortunately not practised in principle and diplomacy, debate, dialogue and discussion are for sure the four words which summarise Moscow's foreign policy, while Washington's continues to be dominated by bullying, blackmail, belligerence and bullishness.

On the eve of the celebrations to mark the 60th anniversary of the victory over Fascism in Europe, instead of being conciliatory to Russia, George Bush waltzes into Latvia, a country with a deplorable human rights record, complete with concentration camps during the Fascist occupation and with a revisionist tendency to glorify its Fascist part in the country's history and declares that the Soviet presence in Eastern Europe was one of the “greatest wrongs of history.”

So, what was the Soviet Union supposed to do, after 25 million of its citizens had been killed in the most vicious fighting in the war, after a quarter of a million of its citizens had lost their lives killing between 75 and 85% of the Nazi troops in the Second World War? Allow the USA to occupy its resources and install disgusting fast food restaurants before colonizing the country with pornography, filth and depravity?

The Soviet Union liberated eleven countries from the yolk of evil, just as the Americans and their allies liberated nations in the west. But for George Bush, this liberation, coupled with a commitment of the Union's resources to develop the three Baltic states and bring them into the front line of development in the areas of education, security, health care, social benefits, to name just a few, was no more than "a long vigil of suffering and hope."

If “suffering” is having an excellent and free healthcare and education system, security of the state, cities in which one could walk without the fear of crime, a guaranteed job, pension, housing, cheap or free public services and the chance to constantly improve one’s position in society through endeavour, then perhaps George Bush would prefer to live in a country like Iraq, where foreign troops have murdered tens of thousands of innocent people and where week by week tens or hundreds of people die violent deaths because his country has destabilized the entire region.