The popularity of Dan Brown’s novel The Da Vinci Code has also renewed interest in the Gnostic Gospels, the “heretical” texts that were banned from the traditional Bible and considered lost until copies were discovered in the Egyptian desert in 1945. 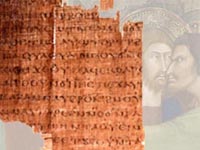 Thanks largely to passages in the Gospel of Phillip, The Da Vinci Code has raised intriguing questions about the relationship between Jesus and Mary Magdalene. Yet lost in this “Codemania” are the equally intriguing questions raised by the more recently discovered Gospel of Judas, concerning the relationship between Jesus and Judas Iscariot, the apostle who allegedly betrayed Jesus for thirty pieces of silver.

The traditional portrait of Judas is that of a selfish and avaricious man. It is said that “Satan entered into him,” and, according to Biblical accounts, even Jesus proclaimed it would have been better if Judas “had never been born.”

But a recent documentary on the National Geographic channel revealed that the Gospel of Judas contradicts the official version of events by asserting that the so-called “betrayal” was not a betrayal at all.

Questions about the motives of Judas are not new. They have been explored in many different forms and venues: Martin Scorsese’s movie The Last Temptation of Christ (based on the book by Nikos Kazantzakis); Andrew Lloyd Webber and Tim Rice’s theatrical musical Jesus Christ Superstar; and Taylor Caldwell and Jess Stearn’s novel I, Judas all provide alternative explanations for Judas’ action. From these works, four discernible theories emerge.

The first of these theories has a zealous and angry Judas desperately longing for a Messiah to rid his homeland of the Roman occupation. In Jesus he saw this Messiah. Jesus had the power to motivate the masses, and, on His command, the people would certainly rebel against their oppressors. Jesus also (according to Biblical accounts) possessed the ability to heal the sick and raise the dead; therefore it was logical for Judas to assume that Jesus’ power over death meant He could not be killed.

But instead of leading a revolution, Jesus began to target the religious hypocrisies of His day. This ultimately resulted in the Temple “riot” in Jerusalem, when He drove out the merchants and moneychangers. Suddenly the religious hierarchy feared that Jesus would undermine their authority, and Rome feared that He would incite an insurrection.

Judas believed that Jesus’ arrest would compel Him to give the command for revolution that Judas impatiently desired. But, much to Judas’ confusion and dismay, no such command ever came.

The second theory also begins with Judas as a zealot who, after listening to the words and witnessing the works of Jesus, becomes spiritually transformed. Although Judas realized that Jesus was no threat to either the Romans or the religious hierarchy, he was also aware that talk of Jesus being a king was causing unease amongst those in power. This unease could only be alleviated if those in power understood that the kingdom Jesus spoke of was not of this earth. An arrest leading to a public trial would provide Jesus the forum to discuss the significance of this kingdom, and Jesus’ power over death would protect Him from harm. But instead of witnessing an exoneration, Judas saw Jesus condemned and sentenced to death.

Some theorists have argued that Jesus also played a role in His arrest. He certainly realized that the riot in the Temple made Him a wanted man. Yet Jesus made no attempt to escape from the Jerusalem area, leading to speculation that He desired His arrest so the final mission of His ministry could be fulfilled—His death and resurrection. The third theory contends that Jesus’ astute insight into human nature directed Him to choose Judas as an apostle, knowing that Judas would be crucial in facilitating this arrest.

The fourth theory, put forth in THE GOSPEL OF JUDAS, has Jesus actually assigning Judas the responsibility of handing Him over to the authorities. Some evidence of this prearrangement may have appeared during the Last Supper. Jesus dips His bread, hands it to Judas, then tells him, “What you do, do quickly.” Yet none of the others at the table understand the significance of this exchange.

Also, upon returning with the authorities, Judas greets Jesus “with a kiss.” While some have argued that this gesture was symptomatic of Judas’ evil nature, Professor Elaine Pagels of Princeton University, in the documentary Da Vinci’s Lost Code, provides another perspective: Greeting another with a kiss during the time of Christ symbolized spiritual rebirth—thus Judas, by kissing Jesus, may actually have been affirming his belief that the arrest of Jesus would somehow result in the rebirth of Jesus.

Whatever else one believes about Judas Iscariot, he clearly was not the incarnation of pure evil. Pure evil demonstrates no remorse for what it does. Yet even the traditional Gospels agree that Judas felt remorse after seeing Jesus condemned.

So the tragedy is not that Judas has been unfairly vilified for almost two thousand years. Human vision, after all, is incessantly limited by ignorance, shortsightedness and fear, which has caused good people throughout history to be unjustly condemned while the evildoers are rewarded. The tragedy is that Judas ended his life without ever witnessing the final, and most meaningful, chapter in the life of Jesus Christ.

This is the tragedy that saddened Mary Magdalene in the closing paragraph of I, Judas. Having seen the resurrected Jesus, Mary now realizes that “she sorely misjudged the one who kissed Him in the garden. For [Judas] had more faith than the rest, since he believed in [Jesus] unto the death. Would that he had waited but a few more days.”