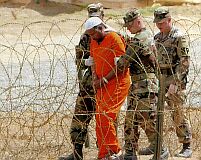 The U.N. Human Rights Commission on April 21 rejected a Cuban draft resolution to force a United Nations investigation into the situation of detainees held at the U.S. naval base in Guantanamo, Cuba. European Union countries on the 53-state commission sided with the United States. The Cuban Ministry of Foreign Affairs decried this move as a "indication of their submission to the U.S. government and of their inability to pursue a policy of their own". The statement follows:

This morning, the Commission on Human Rights (CHR) in Geneva voted on draft resolution Question of Detainees in the Area of the United States Naval Base in Guantnamo, which was submitted by Cuba last 14 April 2005.

The result of the voting of such t, 8 votes to 22 with 23 abstentions, is further proof of the hypocrisy and double standard prevailing in the CHR, which our country has publicly and repeatedly denounced.

As usual, the United States government resorted to intimidation and blackmail to prevent the adoption of this draft resolution.

Thus, that government tried to silence international outrage in the face of the horrendous photographs of tortures in Abu Ghraib and other U.S. detention centers, the revealing testimonies of detainees and of other persons who have had access to them, and the outcry and condemnation of personalities from every walk of life, of parliaments, international organizations, NGOs and the world public opinion.

It will be recalled that Cuba presented a draft resolution on this issue to the Commission on Human Rights last year. Then, we did not insist on putting it to the vote, mainly at the request of the European Union.

But at that time, the evidence we have today, on the flagrant and systematic violations of human rights of the detainees at the illegal Guantanamo Base, was not available. There are over 500 prisoners from more than 40 countries, including Europeans and even minors, and it was not known that apparently it was this facility where the methods of torture, later extended to other detention centers located outside its territory, were first tested.

Neither was it known that such system of torture had been officially sanctioned at the highest levels of the government and legally justified by a decision written in the White House by the present U.S. Attorney General.

The scandalous vote in bloc against this resolution by the countries of the European Union is an additional indication of their submission to the U.S. government and of their inability to pursue a policy of their own, even in an issue on which their respective public opinions, the European Parliament and their national parliaments have demanded a strong European position in condemning such practices.

For example, the Resolution adopted on 28 October 2004 by the European Parliament not only requested the government of the United States to allow an impartial and independent investigation on the allegations of torture and mistreatment of all persons deprived of their freedom and under their custody, but also instructed the Member States of the European Union to present a draft resolution on this issue to the present session of CHR.

Hence, it was to be expected that the abovementioned Cuban draft resolution would have been well received, at least by the Member Countries of the European Union which, not having presented their own t, as their Parliament had requested, should have co-sponsored the Cuban initiative or, at least, voted in favor.

The Cuban delegation held three rounds of consultation on our draft resolution, attended by EU delegations, where their support was requested. In addition, the Cuban Ministry of Foreign Affairs instructed our ambassadors to call on European Foreign Ministries to ask for their co-sponsorship and their vote in favor on this significant issue.

However, several countries did not even receive our ambassadors and the Foreign Ministries of others intentionally scheduled the meeting at a date after the vote in . In no case did we have a positive response. What our diplomats received were only evasive answers at times courteous, at times disdainful and, even, many times with shame.

More than one official of European Foreign Ministries, when asked the reason for their unwillingness to support the Cuban draft , responded that the European policy consisted of defending their interests while not opposing the . The extreme was that a European officer, seemingly furious, told a Cuban ambassador that was to blame for the situation created in , in obvious reference to the fact that European countries did not know what to do, faced with the quandary of upsetting the or confronting their own public opinion.

The truth is that not a single EU country member of the CHR co-sponsored the resolution as had been requested from them. The EU surrendered yesterday morning, as denounced by Commander-in-Chief Fidel Castro Ruz on his TV appearance last night and agreed to vote against the Cuban draft in bloc, in spite of the protest by EU countries not members of the CHR, which by not having to vote argued for a vote of abstention as it would not risk US retaliation.

But the worst is that some of them actively worked in African, Asian and Latin American capitals and even in the meeting room in , in close coordination with diplomats, to prevent the adoption of the Cuban draft resolution.

Our people, like hundreds of millions of citizens worldwide, have legitimate concerns over what is happening at the U.S.-usurped Guantanamo Naval Base. We will not be held back by the fact that the offender is the one that continuously presents draft resolutions against our country at the Commission on Human Rights, which in an unjustified, selective, discriminatory and politicized manner, attempt to accuse us of being violators of human rights, and being used as a pret to maintain and reinforce the economic, commercial and financial blockade and to create conditions that would justify a possible aggression against Cuba.

Cuba has more than enough moral authority and sense of justice to face the resolution against our country, co-sponsored and supported by the European Union and other satellites in the Imperial orbit, without having to resort sophistry of any kind; Cuba has more than enough gallantry to openly present its opinions and proposals, and to request an investigation of what has already become an affront that shakes the conscience of mankind.

Our moral standing is based on the undisputable fact that political assassinations, disappearances, extra-judicial executions, death squads, torture, humiliation and mistreatment of detainees have never existed in revolutionary , neither during our hard struggle for the final liberation of our people, nor during the 45 years elapsed since the triumph of the Revolution.

In all, it is not a surprise for that our draft resolution was not adopted at this bureaucratic vote of the CHR. It was expected that EU countries and some others with their proverbial hypocrisy and double standard would fail to overcome their dependency on the United States, to have justice prevail, and to demonstrate their much-ballyhooed concern for the respect of human rights worldwide.

The countries that voted against the Cuban draft resolution today have been exposed and have become direct and public accomplices to the tortures, humiliations and violations of the human rights of the persons illegally detained, including some of their own citizens, at the US Guantanamo Naval Base and elsewhere.

With this vote, we have fulfilled the valuable objective of putting an end to the impunity hidden behind pretense and complicit silence regarding torture.

It has been proven that the Commission on Human Rights is beyond cure. UN Member States, in order to build a totally different and universal body that is truly at the service of the noble cause of human rights, cooperation and dialogue, will have to avoid the danger that the reform of the CHR does not give birth to a worse creature.

Our people will never give up its struggle and will persist in its denunciation of the crimes committed by the ruling fascist clique in the .

With a greater morale than ever, will redouble its struggle in the defense of justice, rightness and ethics in favor of the attainment, by all the citizens of the planet, of the enjoyment of all human rights.