Is Rumsfeld responsible for torture?

Human Rights Watch calls for investigation of US Defence Secretary

The humanitarian organization Human Rights Watch has issued a report to coincide with the first anniversary of the publication of the first Abu Ghraib photographs, which showed the most horrendous and shocking scenes of torture and disrespect for the human condition since the Nazi concentration camps of WW2. 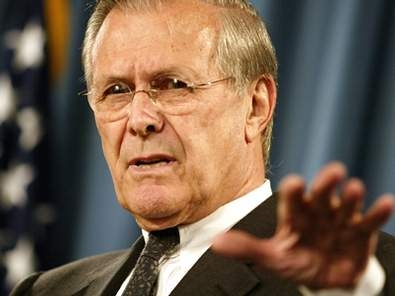 In the report "Getting away with torture? Command responsibility for the US abuse of detainees", the report states that there is "substantial evidence warranting criminal investigations" of Rumsfeld, Tenet (ex-CIA Director), General Ricardo Sanchez (US commander in Iraq) and General Geoffrey Miller (Commander of the Abu Ghraib concentration camp).

The report claims that there is also evidence that Abu Ghraib is the tip of the iceberg and that torture of detainees also took place in Afghanistan, Guantanamo Bay and at other secret locations around the world. The report quotes special counselor Reed Brody, who claims that "This pattern of abuse across several countries did not result from the acts of individual soldiers who broke the rules. It resulted from decisions made by senior US officials to bend, ignore or cast rules aside".

The report examines the legal principle of "command responsibility", under which a superior is liable for crimes committed by subordinates where he either knew or should have known that these crimes were being committed and did not take reasonable action to prevent them.

HRW goes on to claim that Rumsfeld himself signed documents authorizing the use of dogs to frighten prisoners, or forcing detainees into "stress positions", in violation of the Geneva Conventions and the Convention against Torture.

Tenet, it is claimed, was personally responsible for the deportation of detainees to secret locations where they underwent torture, including "waterboarding", where the detainee's head is held under water for a substantial period of time.

As for Generals Sanchez and Miller, they did not intervene to stop the horrific practices going on under their noses at Abu Ghraib.

Will justice be done? Not under George Bush's United States of America. Justice and Decency, two proud precepts for which the USA used to stand, are two more proud precepts which George Bush and his clique of corporate elitists have swept away. Washington today stands closer to deceit, fraud, mass murder, lies, forgery, torture and disrespect for the human condition than to justice and decency.

Washington today prefers to allow Sudanese war criminals to walk free than to stand trial, just because it fears that US citizens will be tried for war crimes and crimes against humanity if it recognized an International Court of Justice. For some reason Washington is afraid.

George Bush's Washington will lower its gaze to the ground, swallow hard and hope that yet another dark cloud passes, because people are too spineless to take this regime on. What a pitiful comment on mankind at the beginning of the Third Millennium. The complacency of the international community and US legal system is paramount to the cowardice which allowed Hitler to impose a 12-year nightmare upon the Old Continent.