How did Condy get appointed as Secretary of State and labelled a Russian expert? Could it be that she told President Bush that she was an expert in rushin' around and he made her his "Rushin' expert"? 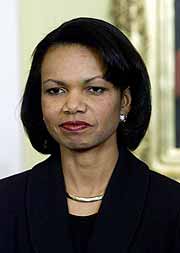 Before admitting to this schoolgirl's question that is was difficult to speak Russian, she had already made a fool of herself on Tuesday, when she declared that the Kremlin's grip on the media is "very worrying." The question is, what grip?

For the information of Condoleezza Rice, who despite being Secretary of State of her country, continues to demonstrate an ignorance of world affairs at a shockingly consistent level, the notion that the Kremlin exerts a grip on the media is a fairy tale invented in the gardens of Washington. As correspondent of the English version of Pravda.Ru, director and chief editor of the Portuguese version and collaborator for three other Russian publications, two of these being official media organs, I have frequently asked for guidelines from the Kremlin on what line to follow.

The answer: "We are afraid we cannot give you any guidelines as you request. You will have to write the truth, after checking your sources, obviously", or words to this effect every time the question is posed.

As journalists we have a collective responsibility to present the facts for our readers to decide where the truth lies. Presenting the facts can sometimes hit obstacles, such as in the reporting of terrorist attacks and it is here that the international press has decided to take up the story, twist it round, exaggerate it and regurgitate it for gullible and unthinking readers to swallow hook, line and sinker.

Certainly, the Kremlin imposed some limitations on reporting in certain circumstances, these being when the information pertains to secrets of state, not to impose limitations on freedom of the press, but to protect state interests, to name one example, not giving terrorists secret information.

Does the USA have laws to protect state secrets? Of course it does. But that for Condoleezza Rice is not "very worrying". "Very worrying" is the fact that a woman of this calibre can waltz into Russia and mouth off about something she obviously knows so little about.

Did Rice come to Moscow as a diplomat? Yes? No, no, no, no, no, no, no! She did not behave like a diplomat. As usual, she behaved with extreme arrogance and intrusiveness, declaring in advance that she was against the centralization of power by the Kremlin.

For the information of Ms. Rice, since her State Department is evidently unable or unwilling to inform her, the actions by the Kremlin are reactions to a situation which places the State of Russia in danger, namely independence trends fanned and fuelled by those who wish to get their hands on Russia's resources. Therefore the Kremlin has to ensure that Russia's wealth is protected by the State, guaranteeing that the resources of the Russian Federation are enjoyed by its citizens, not those of foreign countries.

Whether or not President Vladimir Putin changes the constitution of his country, using the legal norms available to him, is his business, the business of the Russian organs of state, the Russian people and nobody else, certainly it is nothing to do with Condoleezza Rice, who might anyway wish to remember that it was her country which lied about the threat posed by Iraq and launched a shocking act of butchery in which tens of thousands of innocent people were slaughtered. This is "very worrying", yes? Or is it no, no, no, no, no, no, no?

While Condoleezza Rice stated that her comments were made in friendship, it is easy to say that after having been insulting and an extremely rude guest. It is like being invited to someone's dinner party, insulting the chef, spitting on the floor, breaking wind loudly and then apologising.

Hardly the behaviour required of a lady.

Author`s name Olga Savka
15:17
Armed Forces of Ukraine drop chemical bombs from drones - DPR governor
14:59
Russian Olympic ice dancing champion develops gangrene of his leg
18:54
Ukrainian soldier uses chainsaw and fire to release US howitzer from ice trap
18:30
Onet: Ukraine will lose in six months due to shell shortage
17:36
Russian troops defeat Ukrainian troops in Zaporizhzhia region
14:50
Number of foreign mercenaries in Ukraine continues growing
14:17
Russians buy more than 50 tons of gold in 2022
13:57
Russia will not talk to Ukraine. Russia will talk to the West
13:34
USA's plan to give 20 percent of Ukraine for peace hoax
12:51
Medvedev: Ukraine as a state to be devastated, go bankrupt and be turned into colony
Drone with large air bomb on board explodes over Kaluga in western Russia