Latest developments on Moscow's Olympic bid presented in Berlin Yuri Luzhkov, the Mayor of Moscow, presents the most recent developments of his city's bid to host the 2012 Olympic Games in Berlin from 16th to 20th April.

The five cities bidding to host the 2012 games (Moscow, Madrid, New York, Paris and London) are taking part in the annual sports convention organized by SportAccord, at which they present the developments in their projects. The final decision will be taken on 6th July, when the International Olympic Committee meets in Singapore. 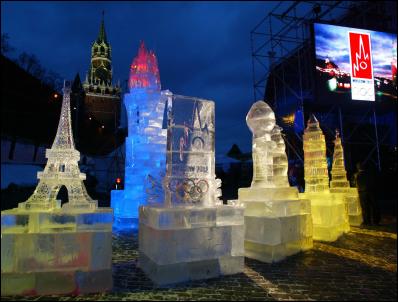 Eberhard Diepgen, former Mayor of Berlin and an Ambassador for the Moscow bid, declared that "For Moscow to host the Olympic and Paralympic Games in 2012 would be enormously beneficial for the city; and welcoming the Olympic Family, athletes, spectators and international media to Moscow would be perfect opportunity for the world to discover what I already know: that it is a fantastic city which has a lot to offer."

During the event, Yuri Luzhkov and Michael Bloomberg, the Mayor of New York, agreed to collaborate in hosting next year's Youth Games, an example of the Olympic spirit not only preached, but practised by Moscow and Russia in every action taken in international relations.

Yuri Luzhkov once again referred to the Olympic River concept as a major benefit, allowing Moscow to host all the events within the city limits and pointed out Moscow's great experience in staging major sports venues.

In the last 25 years, Moscow has staged over a hundred of the most important international sports events. Most of the infra-structures already exist, because they were built to accommodate the 1980 games, which were boycotted by a large number of countries and athletes due to political reasons.

Russia is the only country out of the five involved in the bid not to have been awarded one of the top three venues (Olympics, FIFA and UEFA Football Championships) in recent years.