(Continued. Read Part I of the article here) 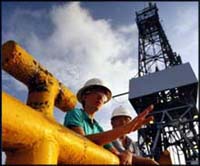 Since the election of George Bush to power we see that this Israeli strategy paper has served as a template for U.S. foreign policy in Middle East. Now let us examine each suggestion in the paper and the events in the Middle East.

1. Only the unconditional acceptance by Arabs of our rights, especially in their territorial dimension, "peace for peace," is a solid basis for the future. During Mr. Bush’s presidency, Israel has abandoned the concept of “Land for Peace” and concentrated instead on unilaterally drawing the borders of a future Palestine. This is being done by first constructing a so called “security wall” separating Israel from Palestine, and then declaring that wall as the international border separating the two states. The “Peace for Peace” means that Israel will increase the pressure on Palestinians by such a degree that Palestinians will come to Israel, hat in hand, begging not for land but for peace. In this way Israel will determine the size and shape of the future Palestinian state. This has been and is supported by United States. The current strangulation of the Palestinian Economy is part of that strategy.

2. An effective approach, and one with which American can sympathize, would be if Israel seized the strategic initiative along its northern borders by engaging Hezbollah, Syria, and Iran, as the principal agents of aggression in Lebanon,

This has been done through news media and United Nations where United States has tried hard to isolate Syria and even have put sanctions on the country. United States has also tried, by pressuring the Lebanese government, to isolate Hezbollah and reduce its power within the Lebanese society. Syria has claimed that former Lebanese Prime Minister Rafiq Harriri was assassinated by Israeli agents to damage its reputation in Lebanon. It is interesting to note that this assassination was one of the main reasons that Syria was forced to leave Lebanon. It was also used to try to impose U.N. sanctions on Syria.

3. Work closely with Turkey and Jordan to contain, destabilize, and roll-back some of its most dangerous threats. This implies clean break from the slogan, "comprehensive peace" to a traditional concept of strategy based on balance of power.

The Israel’s relationship with Turkey prior to the Iraqi invasion was improving rapidly. Turkey knows that it needs United States backing in its negotiations with the European Union. It also needs United States’ help in restructuring its 200+ billion dollar loans. Therefore for Turkey it was a good idea to accept a close partnership with Israel. Currently Israeli pilots carryout air exercises in Turkey and rumours have it that they even spy on Iran from Turkey.

Israel (behind the scene) has traditionally had a good relationship with Jordan. Israel hoped that after invasion of Iraq, the former crown prince Hassan of Jordan would become King of Iraq. The Jewish Daily Forward of New York reported on August 9 2002, the following:

“Several observers said some Bush administration officials are indeed rooting for Hassan at a time when Washington is struggling to find a consensus leader to succeed Saddam. After the London meeting, the London-based Guardian newspaper reported that Hassan had the backing of Pentagon hawks and that he met in April in Washington with one of their most prominent figures, Deputy Secretary of Defense Paul Wolfowitz.”

4. This effort can focus on removing Saddam Hussein from power in Iraq — an important Israeli strategic objective in its own right. Here we see that Israel’s strategy as presented in the document is the removal of Saddam Hussein from power. Israel could not do this on its own. But again Israel didn’t have to. United States achieved the strategic objective of Israel, without Israel spending a single dollar.

So far Israel has achieved most of its main objective except completely neutralising Hezbollah, Iran and Syria. Israel has been partly successful in weakening and isolating Syria, however, Syrian government remains in place and stillsupportsthe Palestinians.The Iraniangovernment is still there, supporting Syria, Hezbollah and the Palestinians. The main point of problem for the Israelis then is Iran. If Iran is neutralised, then no-one is left to back Hezbollah, and Syria is left totally at the mercy of Israel. Then Israel can play the “Peace for Peace” game with Syria.

By occupying and breaking large centres of power in the Middle East such as Iraq and Iran, Israel will be left the dominating power for a very long time. Iraq is now fractured into many pieces and in near future will not be able to support Palestinians in any meaningful way or cause Israel any problem. If Iran is also occupied and made into a federation, like Iraq, the internal strife will be such that it (Iran) too will not be able to do anything.

But the architects of these wars have to, at the end of the day, have something tangible to show the American people for all the blood and money that United States has spent in these ventures. The answer of course is Oil. Now that the war in Iraq has gone badly wrong, and the threat to Iran has pushed oil prices to above 70 dollars per barrel, people are thinking that maybe it will not be a bad idea for the U.S. to do something to bring the prices down.

If United States can occupy Iran, or at least change the regime in Iran to something that is subservient to the American interests, then U.S. can have over half of the world’s oil reserves under its control. There are four countries in the Middle East, that combined, have over 50% of the world’s proven oil reserves. These countries are: Iraq, Iran, Kuwait and Saudi Arabia. United States directly or indirectly controls 3 of the 4 countries, and if it can get the fourth then it has its cake and can eat it too. But to control means to be close enough to be able to protect or threaten the governments in those countries. This necessitates the presence of American bases on those territories or close by. United States has bases in most of the Persian Gulf countries such as Qatar, Bahrain, Kuwait, and now is planning permanent bases in Iraq

Let us be clear about this: Iran does not posses nuclear weapons. Everyone, even in Washington, agree on this. Even Director of United States National Intelligence John Negroponte estimates that in spite of Iran's declaration that it has managed to enrich uranium, Iran will not have a bomb within four to nine years from now.

The main argument against Iran is that Iran is enriching Uranium. Under “Treaty on the Non-proliferation of Nuclear Weapons” (NPT), all members are guaranteed the right to enrich Uranium. Article four of the treaty states that:

“Nothing in this Treaty shall be interpreted as affecting the inalienable right of all the Parties to the Treaty to develop research, production and use of nuclear energy for peaceful purposes without discrimination and in conformity with articles I and II of this Treaty”.

This clearly gives Iran and other member states the right to do research and enrich uranium. So what Iran does is totally legal. In contrast we see that all the nuclear states such as England, Russia, China, France, and United States are in violation of this treaty. The treaty clearly states that Nuclear powers have to disarm.

“Desiring to further the easing of international tension and the strengthening of trust between States in order to facilitate the cessation of the manufacture of nuclear weapons, the liquidation of all their existing stockpiles, and the elimination from national arsenals of nuclear weapons and the means of their delivery pursuant to a Treaty on general and complete disarmament under strict and effective international control.”

Not only Nuclear powers have not reduced their nuclear weapon research and development activities but some openly threaten non-nuclear states with nuclear weapons.

President Bush constantly reminds us that he considers using Nuclear weapons against Iran. For example on 12th April 2006 Reuters reported that President George W. Bush once again had refused to ruleoutnuclearstrikes onIran.

Speculation about a U.S. attack has mounted since a report in New Yorker magazine said this month that Washington was mulling the option of using tactical nuclear weapons to knock out Iran's subterranean nuclear sites.”

Even president of France has stated that his country will use Nuclear weapons to “safeguard” French “interests”. In an address to the strategic submarine forces (FOST) at the Ile Longue nuclear submarine base in Brittany Jan. 19, Chirac said the "perception" of the country's "vital interests" had changed with the world's growing interdependence. "For example, the guarantee of our strategic supplies or the defence of our allies are, among others, interests that are to be protected," he said. Chirac said it is up to the president of the Republic-himself, until at least next year to determine whether a given "aggression, threat, or unacceptable blackmail" has consequences that bring it within France's "vital interests" and thus could unleash the nuclear deterrent.

This is very interesting since none of these countries are threatened and they state very clearly that they want to use Nuclear weapons to protect their “interests”.

While Iran is being threatened with sanctions, military invasion and nuclear attack, others are rewarded for going Nuclear. India which has not even signed the NPT and has tested nuclear weapons is rewarded with access to new nuclear technologies, weapons and even lucrative trade deals.

Israel’s 200+ nuclear bombs are the best known secret in the world. On 12th of October 2003 Guardian newspaper reported that Israeli and American officials have admitted deploying U.S.-supplied Harpoon cruise missiles armed with nuclear warheads in Israel's fleet of Dolphin-class submarines.

“Israeli and American officials have admitted collaborating to deploy US-supplied Harpoon cruise missiles armed with nuclear warheads in Israel's fleet of Dolphin-class submarines, giving the Middle East's only nuclear power the ability to strike at any of its Arab neighbours. The unprecedented disclosure came as Israel announced that states 'harbouring terrorists' are legitimate targets, responding to Syria's declaration of its right to self-defence should Israel bomb its territory again.”

We all know that US, UK, France and even peaceful Norway helped Israel to develop nuclear weapons.

And then we have the Brazilian nuclear activities to consider. Associated press reported on 22nd of April that: “The government-run Industrias Nucleares do Brasil S A has been conducting final tests at the enrichment plant, built on a former coffee plantation in Resende, 145 km west of Rio de Janeiro. When it opens this year, Brazil will join the world’s nuclear elite.” So where are the IAEA, and Security Council? Brazil is doing exactly the same thing that Iran is.

Let us face the truth, Just like Iraq, all the talk about Iranian nuclear activities is a smoke screen for something else. The most likely answer is a combination of the United States strategic interest in oil, containment of China and Israeli interest. But in 2006 governments are understandably shy about mentioning neo-colonialism and greed as the reasons for invading other countries.

Abbas Bakhtiar lives in Norway and is currently writing a book about the reasons behind the United States involvement in Iraq and Iran. He's a former associate professor of Nordland University, Norway. He can be contacted at: [email protected]