Terri is Gone, I hope liberals are happy

Terri Schiavo died after thirteen days of state sponsored “compassionate” starvation. Terri's struggle for life morphed into a struggle between good and evil.

In one corner, the good:  Republicans and Pro-Life Christian conservatives fighting an impossible uphill battle to save Terri's life. In the other corner, the evil: Democrats and other liberal Bush hating groups, gleefully wringing their hands together like Dr. Jack Kevorkian, eagerly awaiting Schiavo's death. 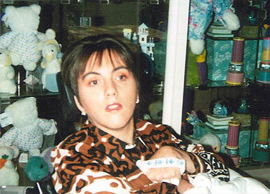 In the middle of this life and death battle stood the corrupt referee:  The Judicial Branch of our government, whose ruling ultimately sealed Terri's fate and will no doubt change the outcome of all future life or death battles of this kind.

Democrats, using their outdated playbook, which led to their defeat in the last two elections, relied on the results of polls to make their decision in support of starving Terri Schiavo. Republicans stuck to their guns and used morals and values to take the side of life.

Initial polls that democrat lawmakers used to make their decision showed that over sixty-three percent of Americans agreed with the decision to starve Terri to death. Quite a convincing number, except the polls were flawed.  We now know the questions asked in the liberal biased polls were misleading, since they implied Terri was unconscious and on life support. Which she was not.

Most people polled assumed she was unconscious and being kept alive on a life support system. They assumed that pulling the plug on Terri was the only rational thing to do. After all, none of the people polled would want to be kept alive in the same circumstance.

One problem, the polls would have come out differently if questions were asked in the right context.

Once again Democrats misjudged the feelings of Americans in the Red States. Their misjudgment will no doubt become apparent in the next election. When they lose once again.

Murder with the pretense of compassion is a very dangerous thing.  Adolph Hitler used the same argument in the 1930's. Hitler's sickening murder of the handicapped and his treatment of Jews in Germany led to the slaughter of millions of innocent people.

Now that a precedent has been set in the Schiavo case I wonder who will be the next victims of liberal compassion. Children competing in the Special Olympics?  Maybe Nancy Pelosi and the rest of her liberal posse can have some fun drowning kittens or kicking a few puppies. Wait, I forgot. There are laws protecting innocent kittens and puppies from cruelty. Too bad Terri Schiavo wasn't an endangered species in a “persistent vegetative state”. Maybe PETA or the ACLU would have come to her rescue.

I find it strange how liberals will hold silent protests and candlelight vigils to save a murdering pedophile from the execution chamber, but will boisterously fight to end the life of an innocent woman.

Anyway, it is all over now. Terri is dead. I hope the liberals around the world are happy. After six years of waging war with the Bush administration they finally won a small battle by killing an innocent young woman. But what the heck. A victory is a victory. Right Liberals?

I am sure there were champagne bottles uncorked around the country the morning of Terri's death. I guess it is all right to drink before noon while celebrating the death of some one in a “persistent vegetative state”. After all, it is noon someplace in the world and she was in a “persistent vegetative state.” Right? And besides, somebody needs to help the French economy.

At least some good has come out of all this. Terri Schiavo's death has proven one thing: The Democrat Party is the party of death. From abortion rights, to right for life battles, liberals always seem to be on the side of death, even though they claim to be the protector of the people.

I think the Rev. Frank Pavone, a Roman Catholic priest who spoke to the press after hearing of Terri's death, summed things up pretty well. He said, "This is not only a death, with all the sadness that brings, but this is a killing, and for that we not only grieve that Terri has passed but we grieve that our nation has allowed such an atrocity as this and we pray that it will never happen again."

I hope liberals enjoy their gleeful death party while toasting the murder of Terri because I think this will be their last victory celebration.  The Party of Death is soon to be extinct.