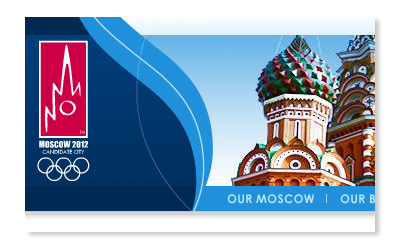 A group of Russians aged between 13 and 20 went to Antarctica in March, taking Moscow's Olympic bid to the end of the Earth, leaving in huge letters, half a kilometre wide, the message  “PEACE. MOSCOW 2012.”

This is thought to be the largest message ever written on this continent, for which reason an application has been made to the Guinness Book of Records.

Meanwhile, taking Moscow 2012 far and wide to the four corners of the Earth, Moscow bid chairman Valery Shantsev traveled to Oceania, also in March, to present Moscow's Olympic bid to the General Assembly of the Oceania region of National Olympic Committees (ONOC) meeting in Brisbane, Australia.

Valery Shantsev stated that “Our Games will introduce the world to the  new Russia. While it is true that Moscow hosted the Games in 1980 - that was another country, another place and another time. Our Bid Committee has provided a double guarantee to the Olympic Family from the City of Moscow and the Federal Government for any economic shortfall of the Games, a truly unique approach in the 2012 race.”

It is also a fact that the 1980 games were boycotted by many countries and athletes for political reasons (the Soviet Union had sent its armed forces to help the government of Dr. Najubullah, being destabilized by Islamist terrorists, the Mujaheddin).

He added that all venues will be built by 2010, while 65% of the facilities are already built, meaning that there will not be a last-minute panic and additional costs incurred in emergency measures.

Moscow is ready, Moscow is organised and Moscow is prepared for the 2012 Olympics, confident that the vote by the IOC in July will open Moscow to the world and will allow the international community to discover this jewel of Eastern Europe.