The war to stop is the next one

Starting a war requires little more than a basic form of primeval intelligence. Stopping a war, however, may call for the concerted dedication of many superior human minds. It is consequently a simple but undeniable deduction that he who initiates a conflict is not likely to be the one to bring it to a timely end. 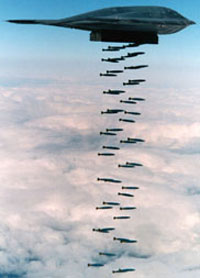 The war to stop is the next one

The savagery in war is perhaps the point of separation that is needed today to cause civilized beings to take notice and hope that some intervention will soon occur. It often does, though world politicians tend to wait for the conflict to be categorized as a genocide, before tackling the matter in ad hoc committees, which then refer the matter to permanent committees. They, in time, may generate some diplomatic maneuvers following which, warnings are issued, through proper channels of course, and some military forces may flex some muscles, prior to the matter being referred back to diplomats and politicians.

History is not a teacher, otherwise we would have learned something from it, but the cliché of "History repeats itself", clearly suggest that too often nothing is gained from having lived through the experience in the first instance. History is a journal, a diary of the politics, wars and loves of the powerful and their followers. The politics of the Biblical era were seldom wasteful of time. You either ran things or took orders. The scribes that later wrote about those times could not refer to specific dialogues leading to political or diplomatic solutions, since there were none. All leaders were "Deciders", equally subject to making harebrained decisions as some leaders are today.

Some of those self proclaimed leaders did enjoy greater influence than others, particularly when they made it clear that God himself had selected them for private and personal conversations. One such leader reported that certain lands had been set aside by God for the benefit of his nation, lands which at the time had been occupied by another nation for over a thousand years. Such was the case for the land of Canaan, and that of course led to the extermination of most of the Canaanites, as chronicled in the book of Joshua, a genocidal incursion by any standards.

Seriously, who can realistically believe that the universe's only God initiated regular chats with Joshua urging him to commit genocides? Since these circumstances were revealed many years after they occurred, in expectation of the next chapter I am trepidating with excitement at the thought of the revelations, which George W. Bush may share with us at some point in the future.

The Bible is an account of God's relations with the population groups of the Middle Eastern regions, but it is also a reliable chronicle of the events of war, and as such it is also a powerful reminder that even among God-fearing people of the past, the acts of war and savagery were the dominant occurrences of those times. It is not surprising that the so-called religious right advocates of today believe that the current war has the approval of God himself, a view recently advocated by one of America's leading sectarian zanies.

God has not been reported as having a serious discourse with any of us humans on this earth for thousands of years, and it would be irreverent to suggest that he had nothing else to say since his words were last reported. I personally choose to believe that God speaks to each of us who listen, on a daily basis, secretly and personally, and I seriously doubt that the voice that I hear is the same voice that might be proposing war to membersof theenlightened Christianright.Once again, somebody must be making that up.

Religious wars are philosophical wars and they have been and continue to be the plague of human kind. These wars began with a rush of religious fervor transforming itself to a nebulous power inebriating momentum and they ended after centuries when resistance was encountered of sufficient force to offset the conqueror's diminished capacities. Thus ended the great incursions of Muslims of the seventh century which spanned from China to Spain and which was guided at the outset by Abu Bekr, the Great Prophet Mohammad's chosen successor. In like manner, the militant insurgencies of Christian Popes and Kings against the occupiers of Jerusalem also came to their ultimate end.

Many wars can be attributed directly to the will of identifiable individuals, but we will leave the world's history to the incisive words of H.G. Wells and mention but a few, such as Hitler, Mussolini, Hirohito, Stalin, Mao, Ho Chi Minh, and a modern day crusader whose name historians, out of shame, may only enter as a footnote.

It is not a simple task to identify individuals who are singly responsible for reestablishing peace. That was meant to be the responsibility of the United Nations which was intended to be a mechanism where all the world's countries would be members, thereby insuring that most problem which had the potential of leading to a war, would be solved through internal diplomacy, and coercion. Yet, here we are today, deeply involved in Iraq, endlessly meditating on a genocide in Sudan, incapable of moving on African famine, and all this, after passing on the infamous Rwandan genocide. We have to ask: "Is anybody home?"

Army Generals, such as Dwight Eisenhower and Douglas McArthur. used massive military resources while inflicting and sustaining great personnel losses to achieve peace, and we do not belittle their great accomplishments. We would prefer, however, to present our badges for individual peacemaking accomplishments, to individuals whose foresight may well have saved many lives while also achieving a semblance of peace.

Ronald Reagan may never receive full credit for his role leading to the cold war warming party. In the mid-eighties, he had theorized that he could avoid a war with the Soviet Union by increasing U.S. military spending to a level that their economy could not possibly match. In 1985, he spent $486.5 billion on military procurement, a record that withstood the test of time for 20 years. This flexing of muscles contributed significantly to the resolution of the cold war.

General Wesley Clark, a giant intellect and for that reason misunderstood by surly bystander Generals, in cooperation with a sprightly Madeleine Albright, achieved a total victory in short order and limited casualties in the Bosnia Kosovo humanitarian conflicts, by waging an intense air war while resisting all efforts to turn it into a ground disaster.

The role of George Bush senior and his very quick defense of Kuwait cannot be ignored, and his decision to avoid pursuing Iraqi forces into Iraq, severely criticized then, merits everyone's admiration today. Is it possible that he foresaw what we now all understand, exception made of course of George Jr. who is still trying to figure it out.

The most significant instant "military" success in memory was the pre-emptive strike in Libya, when it was widely known that absolute ruler Qaddafi was interested in WMDs and had probably caused the Lockerbey airliner crash. Once again, in 1986, the Gipper, a true "Decider"andworthy of the name, made that decision, a nighttime air attack on the Qaddafi palace. He survived, but has been a model world citizen ever since.

There have been other pre-emptive style strikes since the advent of modern warfare, some on the ground, and others from the air, but in either case they were quick and penetrating, and somehow, they all appear to have solved their particular problem. Cases in point are the quick interventions in Panama, Argentina, and Grenada.

It is self evident however that planned wars with the dominant use of ground forces, did not achieve their desired success in Viet Nam, Korea, Somalia, and now Iraq, those scores being three humiliations and one nil.

It also appears that war strategies incorporate some serious side issues for the military. The use of timely air strikes does very little to stimulate the use and procurement of Ground Army weapons, and since army Generals dominate the military and have mouths to feed in military procurement companies, we need to ask if war efficiency has not become a secondary concern to the well being of the U.S. ground forces military partners.

The next War need not be a war, it could be stopped before it ever begins, and wars in progress can be curtailed, if powerful forces dedicated to peace decide to intervene intelligently. Medical science stipulates that cancerous cells must be surgically removed as early as possible and forest fires must be extinguished early as well. The same may be said of conflicts, especially when they are one sided, and a central figure is clearly the promoter of the unrest.

The Libya/Serbia type of solution may appear inhumane when not directly provoked, but a lesson can be learned in this instance from the past. Though the Libyan attack had been clearly an unsuccessful attempt to assassinate a rogue leader, the botched job is in fact an important part of its success. Qaddafi, a wise man in his own way, was made to realize that this was part of what the future would hold for him if he did not mend his ways. There was no change of government and no ensuing baggage of problems which would have otherwise been created had inferior minds prevailed and an attempt made to create a new form of government.

Could simulated near-miss attacks perhaps have been possible solutions to the problems presented by the likes of Idi Amin, Charles Taylor, Afghanistan War Lords, Robert Mugabe, Papa Doc, some dehumanized African leaders and rebels, and many other merciless dominators, thereby at least making an effort at preventing further bloodshed at their hands?

Could simulated near-miss attacks provide a possible solution to some of today's problems? This is a profoundly disturbing thought but no more disturbing than some potential alternatives, which have been openly advocated by some nation leaders whose threats cannot be ignored, and whose good will it is impossible to imagine?

Would such a strategy help in ending the bloodletting stalemate in Iraq? Could not coalition soldiers, who present an easy target for insurgents, be relieved of their patrol duties, and be reserved for swift and timely commando style raids with coordinated air strikes, in a manner not unlike the proven Israeli strategy in Palestine ? Is a degenerating status quo really the only possible strategy that the American coalition Generals can muster as a solution?