On the evils of American 'Multiculti'

Not much logic to history. Big names in civilizations come and go, at the whim of unpredictable trends and processes. One of the ugly realities of modernity is that the world has become a junkyard of failed ideologies. To live in the present is like trying to relax on the comfortable porch of a home surrounded by unsightly putrid piles of garbage. (The upside of this situation is that the thinking person can identify the values which are worth cultivating, simply by noting what is missing in the failed ideologies). One ugly ideology of the present is what I call Americanism: the politics, culture, and morality of the United States since the mid-twentieth century. 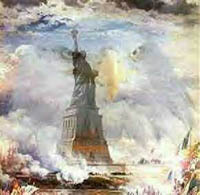 On the evils of American 'Multiculti'

I admit that America formerly was instrumental in spreading freedoms throughout the world. The particular America which inspired me was immigrant America, built from elements of Europe’s cultural and moral traditions. America gave several generations of immigrants the opportunity to reject some of Europe’s previous failed ideologies and to experiment with new ones (not all of which were happy, however). Just and compassionate communities were forged from Old Country values and New World opportunities, and those communities thrived and managed somehow to love, rear, and educate their generations born in America. I personally experienced the positive energy of those old communities, now dissipated, which shared venerable common values.

History is a dialectic. The America of the 1880s and 1920s hardly resembles the contemporary state. One of the ugliest characteristics of contemporary America is its dishonesty and hypocrisy. The great civilizations of the past left behind some remarkable monuments, created from stone or from human wisdom and imagination. The legacy of Americanism is its spin and ability to market itself. America is one big magic trick for the rest of the world. If one symbol were selected as a “Wonder of the World,” to represent America, it would probably be Las Vegas. But America is also about Hollywood, breast and hair implants, corporate capitalism, hula hoops, MTV, unreal reality shows. For other societies, Americanism is the culture of death, because Americanism disrupts and destroys authentic human cultures.

The crude propaganda of the Soviet Union pales in comparison with the spin which America has produced. Clintons excelled at it (though to the point, finally, that no one believed Bill at all), but George W. is perhaps as good (thanks to his speechwriters and neoconservative mentors). A prime reserve of America’s current dishonesty, on the war, for example, is the mouth of W., rancher and former baseball magnate, who prides himself on his aloofness from world history, geography, and reality. W. claims publicly to be guided by his identification with American-style Christianity. (The Bush dynasty is diplomatically areligious. W. is a “born-again” Evangelical, though recently I saw an internet photo of W. toting a large Talmud. George Sr. attends Anglican worship. Jeb claims he’s Catholic. One envisions a scenario in which future Bushes enthusiastically embrace victorious Islam).

America was an experiment, a dialectic which links the past and the future. Similarly,the failed ideologyof Soviet Communism, in its several decades of existence, linked a past way of life to the final bankrupt years of a massive, costly and deadly social experiment. Soviet Communism, established through violence and aggression and strongly influenced by European Jews who pushed their own ethnic and anti-Christian agenda, never had a chance (although the Chinese version of communism is managing much better). The Soviet Union collapsed finally because the experiment had reached its historical conclusion; it could no longer function, and thus gave birth to the current corrupt system which dominates Russia and other parts of the former empire.

The American experiment now has been taken to its logical conclusion. America functioned well under the system of the melting pot, according to which my ancestors in America were required to sacrifice their language and culture. America once had some sort of common system of values, but lost it after the 1960s, when America embraced moral and cultural relativism, political correctness, and sham multiculturalism. It’s true that periodically W. and other Americans publicly thump a leather-bound Bible, or even display tablets inscribed with the Ten Commandments, but that’s mainly for show and no longer signifies the deepest convictions of the majority of Americans.

It’s the trinity of relativism, political correctness, and multiculturalism that ultimately destroyed America. Political correctness is wrong because it privileges certain groups and discriminates against others. America’s promotion of Kwanzaa celebrations and annual African-American History Months reminds me of the Soviet Union’s cultivation of communist myths. One notes certain similarities in the public cults of Lenin and Martin Luther King, Jr. King in recent decades has been promoted by the American government as a superhuman figure, a secular American saint. He was, no doubt, a pioneer for African-Americans, and his accomplishments had not previously been matched in Black America. Yet adulterer and plagiarizer King is no role model for me, and I question the decision of America to elevate him to civic sainthood. MLK Day is, for me, not a sign of “progress,” but a symbol of decadence, propaganda, and injustice.

Healthy societies are concerned with opportunities and obligations, that which we are obligated to provide our community and fellow human beings, not rewards which history “owes” us. But Modern America is about grievances, about the “debts” which privileged groups and individuals expect to reap from the world, their state, and neighbor. In order that America might have survived, it needed shared beliefs and culture, not the contemporary system which teaches that each human culture and value are of equal relevance.

True human multiculturalism is a marvelous thing. America’s multiculti is a lie, outrageous as the grossest piece of Soviet propaganda. The Soviet Union, ultimately, was consigned to the trash heap of human history. Without the Soviet threat, Americanism is now irrelevant. As with other once great civilizations, America and Americanism are perishing.