US Secretary of State threatens the DPR Korea

Condoleezza Rice, the United States Secretary of State, has made a not so veiled threat to Pyongyang about the Democratic People's Republic of Korea facing  other options  if it does not cooperate in talks over its nuclear plans. 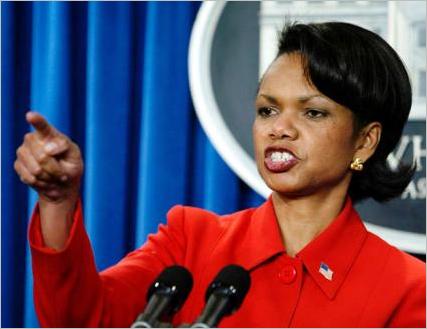 What other options might these be? We all remember the magnificent evidence presented by Colin Powell to the UN Security Council and his satellite photographs of Iraq's Weapons of Mass Destruction, as he lied through his teeth, presenting evidence which never existed, forming the casus belli of Washington's act of slaughter against Baghdad.

What  other options  will the United States of America bring to the DPR Korea? An invasion? Maybe turn it into a colony? Commit another act of mass murder on a horrific scale, blowing the arms and legs off North Korean children in the name of freedom and democracy, winning hearts and minds through shock and awe tactics?

What pressure can Washington bring on a Democratic People's Republic of Korea which has enough missiles to turn the entire region into a sea of fire?

And anyway what other options does Pyongyang have, since Washington habitually uses fuel supply as a bargaining point in its relations with the Democratic People's Republic?

The abrasive and anti-diplomatic attitude followed traditionally by Washington under the Bush regime, and continued under Condoleezza Rice's tenure of the State Department, produced the obvious reaction of repudiation from Pyongyang, which reiterated the country's pledge to peaceful and friendly relations with the international community and complained about Washington's extreme belligerence against the DPR Korea.

The Foreign Ministry of this country stated recently that "It is utterly illogical for the U.S. to argue about the prospect of the resumption of the six-party talks while declaring that it would  seek the overthrow of the system of the DPRK to the very end, adding that "It is not only quite natural but also worthy of being proud of that the DPRK makes nukes for self-defense when the U.S. threatens it with a preemptive attack while boasting of nuclear predominance."

The question is not the attitude of the DPR Korea, but rather that of Washington. Basically, start behaving in a manner which goes hand in hand with international law, stop threatening other countries, stop using bullying and blackmail and start gaining more friends.

Condoleezza Rice also raised the issue of human rights within China, yet again providing fuel for the notion that she is the most absurd figure ever to have headed US diplomacy. How can this lady speak about human rights when she represents a country which has committed institutional acts of torture in two continents, when its legions have slaughtered tens of thousands of civilians in an illegal war?

Maybe Condoleezza Rice forgot to look at the photographs where US military personnel were committing acts of sodomy and sexual depravity against Iraqis in Abu Ghraib, before she made her comments about human rights. Maybe Condoleezza Rice forgot to take a look at those horrific scenes of civilians murdered by the armed forces of the country she represents.

And she speaks about human rights?