The Baseball Hall of Fame, after all, is a reflection of American culture 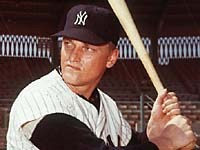 Although "The Human Rainbow" more completely details the egregious injustices directed against Maris for breaking this record, (injustices that persist to this day), the principal amongst them was the fact that Maris's accomplishment was marred (until after his death) by an unsightly asterisk, designed to indicate that eight games had been added to the 1961 baseball schedule, and without those additional games Ruth's record would have remained intact.

At the time I wrote "The Human Rainbow" the scandal involving the use (or more accurately "the abuse") of steroids and other performance-enhancing drugs in Major League Baseball was in its nascent stages, so only a few prescient sports commentators were arguing that any records set by players who used these drugs should be expunged, or at the very least have an asterisk placed beside them.

Now, a year later, these sentiments are being echoed in the United States Congress in the wake of hearings investigating the use of performance-enhancing drugs in Major League Baseball.  Senator Jim Bunning of Kentucky, a Hall of Fame baseball player himself, was one such legislator sounding this call.

While I certainly do not disagree with the remedies described above, I also argued in the previously mentioned article that in Maris's case Major League Baseball needed to take an additional step by inducting him into Baseball's Hall of Fame. Otherwise Maris's family, friends and fans could eventually endure the injustice of watching players who used performance-enhancing drugs inducted into the Hall ahead of him.

Recently the Congressional testimony of former Major League Player Mark McGwire, the man who broke Maris's home run record in 1998, appears to have transformed my hypothesis from speculation to probability.

McGwire not only refused to admit or deny steroid use during his record setting season, he also refused to concede that the use of such substances was tantamount to cheating, claiming instead, "That's not for me to determine."  This viewpoint (not surprisingly) was starkly similar to the remarks of the current single-season home run record holder, Barry Bonds, who, despite being summoned before a grand jury to testify about steroid use in professional baseball, stated, “I don't know what cheating is.”

Yet, despite these ambiguities, Jerome Holtzman, a retired baseball writer, said he did not believe suspicion of steroid use would preclude McGwire from eventually being inducted into the Hall of Fame, while Ross Newham, a member of the Hall's writers' wing, said he intended to vote in favor of McGwire's induction as soon as McGwire becomes eligible.

Although, in "The Human Rainbow," I asserted how vacuous human praise really is in America - a nation habitually infected with myopia, where visionaries are incessantly scorned, ridiculed, censored and murdered while liars, war criminals, ruthless profiteers and paradigms of excess and superficiality are trumpeted as deities, I conceded that in some instances humanly bestowed honors or awards were the only way to acknowledge and apologize for past injustices.

But when I watched Baseball's Hall of Fame, just a few short weeks ago, continue its tradition of cowardice and hypocrisy by once again refusing to induct Roger Maris, I suddenly realized that perhaps the greatest honor Maris can receive is to NOT be inducted into what is (or soon will be) a “Hall of Shame,” where duplicity and substance abuse appear to be the price of admission.  The Hall, after all, is a reflection of American culture, and American culture dictates that more time should be spent rationalizing injustice and dishonesty than rewarding fairness and truth.

So while Ty Cobb, a virulent racist, Charles Comiskey, an owner so cheap that his players had to pay to wash their own uniforms, and a plethora of white players whose “achievements” all occurred prior to baseball becoming a racially integrated sport, are in the Hall of Fame, and while it appears that the Hall has no compunction about inducting players, managers or owners who had knowledge of steroid abuse or who used performance-enhancing drugs themselves, “Shoeless” Joe Jackson, a member of the 1919 “Black Sox,” is banned for “cheating,” because he allegedly knew that some members of  the 1919 White Sox team had agreed to throw the World Series, even though, as most baseball scholars concede, his individual play and statistics during the series were commensurate with his normal performance.

So, since Major League Baseball, as Maris's legacy demonstrates, is apparently fond of asterisks, perhaps it is time for the sport to place another asterisk - this time by the adage: “Cheaters never prosper.*”

“*Unless they play Major League Baseball.”