Moscow is not Russia and Russia is not Moscow, as everyone knows. Yet the conception of both in many western eyes is wrong and this becomes blatantly apparent for those of us who visit this country on a regular basis. What will the tourist find in Russia ? 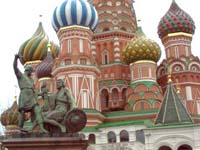 There are two types of visitors to Russia - those who come with open eyes and those who come with a preconceived idea that everything will be negative, and spend their whole time looking for problems, as we see with certain western correspondents whose stories are no more than that.

Interview the man on the street in western countries, who has never been to Russia and has had little contact with Russians, and he will prove the success of the western propaganda machines during the Cold War. He will tell you with great authority that Russian food is bland, that Russians people are surly and unfriendly, that the buildings are dark, the streets dirty and the authorities bureaucratic.

Starting with the food, slagging off another country’s cuisine feels great for one’s national pride and saying “their food sucks” is like saying “my cuisine is the best in the world”. Although tastes change from person to person, it would require a tremendous amount of bad will to say that Russian cuisine is bland and without interest. The cuisine follows the geographical position of the country’s regions, bordering on Central Europe , covering all of Eastern Europe and Central Asia, through to the Far East , reflecting all the respective flavours and seasonings and types of cooking.

Go to a typical Russian restaurant – not to mention that in Moscow there is everything from Portuguese to Brazilian, from Korean to African cuisine – and the menu will resemble a book, rather than the simple sheet of paper those who deride Russia ’s cuisine receive when they eat out. A simple test may be the hot potato, that ubiquitous proof that globalism has finally arrived for this humble tuber five hundred years after Sir Francis Drake is supposed to have brought it back from South America. How many of those who state with such authority that Russian cuisine is bland have eaten a hot potato with smoked salmon, fresh baby toadstools and fresh crab salad as a filling?

To say that Russians are surly is the same sort of ill-thought, gut-reaction, knee-jerk reflex statement as saying that all Americans are fat, all Germans eat sausages, that Chinese women have a peculiar anatomy or that their dogs bark sideways. In a word, ridiculous. Russians in general prefer to laugh than to cry, the Soviet society reflected the same vein current in the Russian Orthodox tradition of helping the neighbour, doing social actions, being friendly and polite. Those who mouth off about Russians being unfriendly, do you greet all your colleagues in the morning and say goodbye in the evening with a handshake?

For the tourist, rest assured that if you happen to fall over in the street, this is a place where everyone will come running to help you up.

As for the buildings and tourist attractions, Russia and Russian cities are among the richest cultural centres of the world, with a vast panoply of places to go and things to do and to mention just a few here would be an insult to the rest, which would take far longer than the norms of an internet article would permit.

Regarding the streets, rarely does one see a scrap of paper on the floor and the old adage about the pavement being so clean you could eat your meal from it, is not so far wrong in Moscow . Saying the streets of Moscow are dirty is like saying Big Ben is pink and the Queen is a fairy godmother.

Finally, many of the bureaucratic norms in force in previous years have gone, as in most other countries.

What will the visitor to Russia find? A friendly, dynamic country, whose youth are happy, proud of who and what they are, and who want to build on what they have. A beautiful country where mankind and nature live together in a marriage not of convenience but impassioned. Tourist attractions and a must-do list second to none. In short, coming to Russia is a must-do and until it is done, it is grossly unfair to perpetuate the myths which one sees immediately upon arrival to be false.