Only humans distort the truth

The truth of the matter is that lying is here to stay, and prosper. Though lying of itself seldom provides a discernable sensation or feeling of pleasure and satisfaction, its results when coupled with a reasonable degree of expertise are likely to exceed any possible measure of success to be expected from overt truthfulness, a great virtue which it is said provides its own reward, and sacrifices. 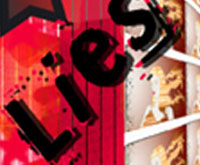 Only humans distort the truth

The main catalyst and justification for lying is the golden rule of survival: "The end justifies the means", and it often begins at a very tender age. It is said that some two-year-old children, after creating an unannounced mess on the floor, carpet, or even closer to home, try to attribute responsibility to a conveniently present brother or sister.

This initial adventure into the world of the unreal is a spontaneous instinctive parry, designed to thwart a vicious attack by the forces of truth, and is therefore, essentially a defensive maneuver. The child's brain cells will develop, and guided by the excellent examples available in its immediate and public surroundings, it will learn that in the hands of an reasonably intelligent person, the art of aggressive lying can lead to untold rewards, perhaps as far reaching as the Presidency of the United States.

We have in the past noted that George W. Bush is a master of this science and we have much to learn from him, as he has pushed his expertise to a level that most people would have thought unattainable. While giving him credit for his innovations in this area, we tend to reflect on the possibility that he is perhaps as much a victim of the times as he is an accomplished perpetrator, though one does not necessarily justify the other.

We sometimes wonder how it can be that people are deprived of their life savings by a slick peddler of fraudulent schemes. Could it not be that some people have literally no moral conscience whatever in their psychological make-up, and therefore do not second-guess themselves on anything at anytime. Could not such people, totally free of self-incrimination, somehow convey the impression of absolute honesty? Do we not know someone that seems to fit in that category?

We appraise lies by the importance of their effects, and since lying is seldom admitted to, and not always self evident, we learn to bend in the wind of deceit, and stop questioning the truthfulness of most actions and statements, the adroit purveyors of falsehood being once again the overall beneficiaries.

The greatest accumulation of truths are in Nature itself as well as its biographer: Science. For millenniums thinkers have looked to the sky admiring the forces of our moon, sun, planets and stars, seeing in their animation the ultimate truth of the Universe, indications of coming events, and attributing to it the distinction of being God's most probable lieu of residence.

This thought remains with us today, as we raise our eyes towards heaven praying God to do something for us, while others look to the ground avoiding the temerity of eyeing God face to face. Either way it is a testimony to the only being that we acknowledge universally as the keeper of all truths.

Science dissects nature to its most basic elements and is our only totally reliable source of truth on earth, The human propensity for distorting truth is what sets us apart from nature, the human mind having long ago discovered that lying is a simple and effective way of getting other people on side with our own self-centered designs.

In the normal course of our simple lives, perhaps Love may be equated with truth, since love by its nature is acceptance, and true love does not recognize untruths. Though truth, and lying, are thought of principally as human traits, can we not see in the kingdom of animals, the beauty of truth in the love of a loyal and faithful dog for its master?

From all of human history, specially the last seven thousand years where we can discern some semblance of civilization, only three Great Prophets have emerged, and each has attracted masses of adherents. Each of the Great Prophets has devoted all of his adult life to the glory of God, but there are three of them and, if we were to believe many of their leaders of today, we would conclude that each of them lived by the shadow of their own personal God. Could there logically be three Gods? The rules of nature and science profess that such a premise is impossible since God, as these Great Prophets and their resultant religions describe him, is Universally Omnipotent. There is only one Universe, how can there be more than one Universally Omnipotent God?

Each of these prophets have left us with a legacy of uplifting thoughts and guidelines for the soul, but the religious leaders that followed them, while purporting to propagate their master's teachings have in fact created for their followers numerous dogma of their own, most of which are indefinable in historical documents, nor are they ascribed to their prophet's teachings. Did not Jesus despise wealth seekers, yet the world's principal Christian religion, of which I am part, is best identified by its gaudy display of physical wealth, which is exhibited in the name of spiritual values? Did not Mohammad forbid violence among Muslims yet even today Sunnis and Shiites relive daily the ancient deadly rivalry of their founders? When textually praying Allah with the words of the Sura: "Guide us to the straight path, The path of those whom You have favored, Not of those who have incurred Your wrath, Nor of those who have gone astray". Are they not concerned as to which path they will be deemed to have trod? The religious leaders of today are undermining their Great Prophets' fundamental teachings and, as Human Distortions go, this is the most serious.

Communism as it was practiced in the communist states, and still practiced today in a limited few, comes in at a respectable second place in our determination of Greatest Truth Distortions. A popular oversimplification of a theoretical communist regime is the equal distribution of wealth and privileges among the citizens of a state. Unfortunately outside of religious monasteries and convents, this never did occur, and Communism was in fact and remains today nothing other than an oppressive military occupation of a state by a party whose principle members enjoyed the wealth and privileges of the state, while the common citizens shared equally in the resulting poverty.

An honorable mention badge for Human Distortions must be awarded posthumously to Adolf Hitler and his scoundrels, close friends of the Bush family ancestry, for their stated defensive action against Poland, whose malevolent intent was to invade Germany. Does the war in Iraq somehow come to mind at this point?

These are matters of history that do not occupy much place in our current mind frames and may in fact serve to dampen the severity of the current sins of truth omission, however tragic these might be. We are, however, in the throes of a rapid expansion in the use of untruths at the highestlevels of human interaction, and, in no particular order of presence, we will dwell on some as follows. The worlds of politicizing and TV advertising however are of course beyond redemption and will be ignored for our purpose.

China is a militaristic oppressive one party dictatorship and so is Cuba. In their relations with the former, the US government grovels at their feet while otherwise unscrupulously punishing the people of Cuba for being the victims of a militaristic oppressive one party dictatorship. The obvious Big Lie here is the probability that the U.S. to this day is punishing Cuba for having had the temerity of repulsing the U.S. backed invasion of Cuba at the Bay of Pigs, 45 years ago.

Prior to the Presidential election of the year 2000, George W. Bush, assigned Dick Cheney the task of sifting through all the available and acceptable republican stalwarts, and present his choice for the post of Vice-Presidential candidate. With as much integrity as he could unearth he selected himself, a dour, introverted, sarcastic, egocentric with a heart problem, and on a mission of gathering wealth for himself and his friends the leaders of industry. The identity of his second choice was never revealed.

George W. Bush has a simmering hidden agenda, which was fomented in the halls of a covert University group to which he belonged, and whose aim is to perpetuate a wealth based aristocratic class of families, companies and individuals, and he believes that he and his family are central players in this insane comedy. His political programs are being insidiously achieved by favoring the powerful in all ways possible, and at every turn, every opportunity, he has proposed legislation and taken decision with that orientation as a constant. His positions on social security, taxation, immigration, and outsourcing, clearly reflect this intent. A flagrant social fraud and huge lie.

There is nothing like a war to have congress bolster military strength, and George W. Bush had to find one to satisfy the whinings of the hawkish neo-cons and the military establishment. Possibly or at least more than likely, the War in Iraq, the loss of military personnel, the killing of innocent civilians and their children, and a staggering economic burden, was initiated by George W. Bush, due to the U.S. military establishment's craving for a stronger Defense Industry, and all other given and attributed reasons may be pure smoke screens and speculation. This is a giant among Human Distortions.

Lastly, there is a benign though intriguing on-going deceit being perpetuated by the right oriented TV hosts and lesser politicians. We keep hearing from them that they hope Hillary Clinton will be chosen as the democratic candidate in the 2008 election because they know they can beat her easily. If I understand this premise correctly, would they have us believe that they are advising the Democratic Party to nominate a stronger candidate or risk losing the election?

How kind of them, but how insulting to the intelligence of the American electorate. The truth is, Republicans are traumatized beyond their senses by Hillary Clinton and they may end up having the same difficulty in finding a suitable and willing republican politician to run against her in 2008, as they are having in 2006 in the State of New York.