How Italy and the USA became the most respected nations

Once upon a time in the south, there was a man who was quite nice looking and he used to sing - when he was young - on holiday-ships in the Mediterranean Sea. Some mafia bosses were present when this guy gave one of his beautiful performances. The Sicilian boss of the bosses said: "Who is that singer making me cry a river?" US-Capo with name CIA answered: "It's Berlusdoggy or so, a poor and rather stupid coglione from Milano." The big boss grumbled: "That's our man for whitewashing all our black money. Let him manage a newly founded company and make him buy some real estate all around his Milano-town with our dope-money on Swiss Banks." 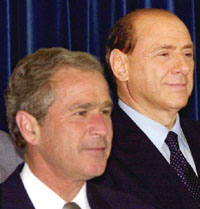 How Italy and the USA became the most respected nations

This was the start for a career, never seen before. That guy whose name I have forgotten: Berlusdoggi, Binisconi, Berlamafia or something of that sound, created a huge TV-conglomeration with the profits of his mafia bosses. The government of this Craxi-State assisted him getting all rights for broadcasting, with the goal to increase the stupidity of the whole population. Then another idiot, called René Delavy, came along and spoke: "Berlusdoggi, just use my formula "Democracy = Dictatorship of dull majorities". With the help of your media-centres you will convince all stupids of your home country that no one has to pay a single Lira of taxes anymore once you are elected Chief of State."

For a period of eight years, this tycoon of ridiculous trivialities governed that Southern Shoe. He could always prove that he had never committed any possible crimes in his past. The third power in the State, blind justice, was stopped any time by his lawyers or his minister of justice. If necessary he just dictated his parliament to change laws in his personal favour. In the meantime, folks in north and south were dulled with empty phrases, naked women and gossip on all TV-channels, just as learnt from Hollywood-America with its Fox-TV and Disney-Channels. He tried to copy his friend George Little-Tree who did not reach 50 percent of the votes but still became two times President of his United States, with the help of judges chosen by his own father, when that guy was the president. George II loved starting a war to grasp some Saddami-Hussini who was wilfully favoured by his father, George I, in a former war against the Persians.

After election, the Knee-boot-state of Berlamafia experienced, like the George-State, all imaginable troubles in the world. Everybody began to hate these two states, governed by extraordinary genius who tried to export their model of "Democracy = Dictatorship of dull majorities" to all Arab and African nations, because they wished to neo-liberalize the whole globalisation, to have all rich chaps paying no taxes to the disadvantage of the poor, increase the nation's indeptedness to the max and making war wherever it seemed possible, with the funny idea to steel oil from innocent people wherever possible.

After this catastrophe I am writing these lines and I don't know yet if one or both of my heroes will land some day in jail or in Guantanamo. The chance for such scenery is not bad, if the dull majorities of opposition will act less stupidly, once at the power again - be it in Italy or in the United States.

Thanks folks for your attention. In your place, I would not believe one word of that. And so I have summarized the comments I will earn anyway from some of you, once this Fairy-tale is published….