Today's world lives in distress and suffers from chaos

The United States of America are the most powerful state of the World. They are the one and only hegemonic nation, and at the same time most militarised state on Earth. How come? The citizens of the USA as the major victims of terrorism? Not. On every US-citizen in the World Trade Centre of 9/11 (total 3000 victims), the US-Army has slaughtered 1000 Vietnamese (3 Mio. victims) and killed 300 Iranians by support of Saddam Hussein. For each US-American of WTC, the Latin America's dictators have tortured to death, with the consent of several US-presidents and their CIA, 10 young Argentineans, Chileans or other nationals, in fact the whole intelligentsia of a generation - and no politician or editor, in the east or the west, especially not FOX-TV, CNN, the New York Times or FAZ or Herald Tribune or Le Monde or NZZ would ever talk about it, whereas 9/11 is meant to be the worst criminal act since Hitler's holocaust on Jews. 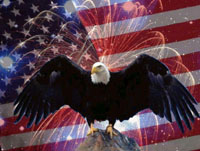 Today's world lives in distress and suffers from chaos

The Friedman-theory of Globalisation and Neo-liberalism, in particular as done under the neo-conservatism of Reagan and Bush, has always functioned in a way that rich people and nations become richer and poor become poorer. Africa and some other aeries do not have any chance in this casino-play of making money flow to Swiss Banks and in the pocket of the richest people on Earth. By the end, USA will force all remaining energy stuff and raw material with their atomic power to be transported solely to their own country and the rest of human beings can starve and have "think tanks" study wherefrom they can still stay alive. The stupidest president ever, George W. Bush, was landing in a little plane and in bomber jacket on a huge aircraft-carrier and this is the most ridiculous documentary film of all times, comparable to the asshole-speeches of Hitler and Mussolini's pose on a little balcony.

European Countries have "colonized" Africa and some other aeries in the World, torn in pieces their natural life and brought the idea of money-capitalism, technological greed-thinking and the belief that with force, just anything will be better. Then they disappeared from Africa and the rest, left blood-dictators with their children-armies and after the slaughtering, they organize today some proof-seeking Carla-Del-Ponte-Tribunals. However, the whole world has already seen for years in the press and on TV-screen all criminal acts of the world. We can send Carla Del Ponte back home and these stupid attempts to search for justice. From Africa come some very starving Negroes (it is a scandal to name such people "black", they have never been black) and want to live in Europe . They are seized, put in jail and then sent back home, after they have indebted themselves until life-end, for the services of some ugly African mafia organisations. It is evident that Europe would collapse if all poor Africans would come to Europe . But as it is today, the colonisation of Africa functions in a way that this continent will collapse and nothing real can be done to prevent it, because rich become richer and poor become poorer. And all "think"-tanks and NGO-conferences of the world just do as if they would understand what's happening here.

In Latin America , Pinochet and some other bloody dictators seized hundreds of thousands of students, teachers and editors, the whole intelligentsia of a generation, and tortured their own youth to death. This was done in the interest of all US-governments and under the instruction of the secret army of the most cynical presidents, theCIA . Now thesestateshonour those blood dictators in making the parents and children of victims pay for the free and luxury life of bloody dictators, politicians, torturers and generals. And all the press laughs its head off for having nothing to tell about the truth on the violation of ethics in Argentina, Chile, Vietnam, Nicaragua, Iraq, Tibet, Congo, Ex-Yugoslavia and the rest of past and present dictatorships.

And the World Press just does what all the “boulevardish” and dull editors do since Hitler and Murdoch: They cry "BRAVO" for so-called and facts-turning "Bush-revenge" at the beginning - and wake up and recognize their own stupidity only by the end of the sad song when all of us become victims of world's most stupid political brains ever. Live in or visit today's McCarthy-U-SS-A and you may be seized - for the colour of your skin, your beliefs or your stupidity to visit that country - by Bush's patriots and tortured abroad in Egypt or Eastern Europe, or you may be thrown innocently in a US-jail anywhere in the world or just deposited in Castro's Guantanamo - against all rules of human-rights.

The Religious Leaders of Catholics, Moslems, New-born-Idiots and some other faith from legendary guys like Jesus, Mohammed, Buddha etc. organize some Hollywood and Ratzinger-like mass events and declare their specific Gods as the only and "infallible" Holy Guy in heaven, apparently existing in the area above our overstressed heads. Normal reasoning would dictate the following fact: The ONE and only God of the Universe would leave the lead to the natural laws on Earth. Instead the male part of the Islam, of Catholicism and other religions declares half of their population, more precisely the female human beings, as second-class persons. They throw them in fire, slaughter them with stones (whereas the male violators are glorified for their fitness in corps and spirit), force them under masks or head-towels, arrange laws to the profit of privileged boys and their fathers. And this lasted now for a period of over the last 2000 years, practically in all religions. And all the normal people and all the press of the world do just believe, that the one and only god, the one of the nature throughout the universe, just accepts this torturing view on justice and brings peace and/or virgins to males after their death. In fact, they will burn in hell after having committed on Earth all crimes we can think of during their lifetime.

In Russia, Yeltsin gave away trillions of values in dollars or rubles of the Ex-Soviet-Union to a handful of greedy oligarchs, who have even stolen the starting money from the stupid poor Russians - and so the communist idea (Russian folks fortune: oil, gas, metal and all the rest should belong to the population as a whole) was replaced within days by the idea of Friedman and Chicago boys US-capitalism. Putin is a little more intelligent: He puts in jail the oligarchs that did not want to give him the money he needed - and the rest can stay as rich as before. And the normal folks stay starving without any help of the government. But the oligarchs can continue to deposit the stolen fortunes of nature and all the wealth of their nation in Swiss banks. By the way: Where does Putin take the Russian peoples' right to get rid of the gas- and oil-wealth of his nation for an apple and an egg? This man is crazy. He sells the only fortune of Russia within his time of dictatorship, whereas the local future generations will be starving?

Same goes for all Arabian Nations: In 20 years from now, the sheiks will have to give away their gigantic reserves of oilto USA or China, whoever isfirst to threaten with atomic bombs on thepalaces of the most cynical rich guys in the Middle East. They are not owner of what nature has given to human mankind. Just tell this little truth to a handful of men who have not half of the intelligence of my dog. Think also of the fact, that the most stupid mafias of the world, the CIA and all other secret "intelligence!!!"-services, represent the dull organisations on Earth and should therefore be hidden in the death-camp of Guantanamo ... They simply turned against the very few philosophical and wise men - to the advantage of the bank accounts of the most stupid and powerful idiots of all times, before all our securities will fall down in a terrible "Orkus" of human vanities.

The Chinese "Wirtschaftswunder" (fantasies in making money out of stones) is another mafia-matter: The Chinese Government is right now giving away the whole natural wealth of the country to a few golden boys, which are living on the account of the poorest Chinese folks from the land, whereas 80 percent of the population in agriculture starves and will pay the price for such vanity and the new and huge indebtedness of the Chinese government that will culminate in a future collapse of China. Mao was by far wiser than his crazy supporters and survivors. The "Wonder in Economics" will collapse when the Chinese government will realize that the US-treasury bonds of mystery-man Alan Greenspan cannot be sold to anyone for a single penny, because the gigantic US-bankruptcy if covered only by fantasies of making gold out of worthless economic theories since Adam Smith, Marx, Keynes and Friedman. Only today's USA-pragmatists are more stupid than these "Homo-in-the-centre and the animals and nature of our platform Earth in the asshole" theoreticians.

The real mafia bosses in Italy, in America and in Africa have in fact become the nicest guys of the world, when compared to Bush and his crazy bunch of criminals (see my Open Letter to George W. Bush - criminal acts in politics), also when compared with the shareholder-value-gangsters of CEOs on top of the big companies in the USA and in Europe. The poor people throughout the world pay for the craziness and the greed of the Swiss bankers, the stupid US-managers and Bush's bunch of criminals, the Russian oligarchs and the new Chinese golden boys.

Do you still have some questions, privileged Gentlemen, tortured Ladies and starving children? Write to all Alibi-NGOs (WWF, Greenpeace, Amnesty International etc.) representing like sheep the world's power nations. Write to the cynical Assembly of United Nations and his secretary Kofi Annan, Bush, Putin, Blair, Koizumi, Chinese government, Merkel, Solana, Chirac, Berlusconi, Blocher and other "great names" of this cynical world - or directly to your personal God in heaven of any religion. They all know that, just now, our reality is in its free fall. On Earth, life is on the way to become a real hell - in economy, ecology and in the head of those who don't want realise, what the true state of affairs on Earth will be for our future generations. We are all victims of a culture of high stupidity - and no one was able to see that we all are going down the drain right now.

The opinions of the author may not coincide with the views of Pravda.Ru editors