Haiti: One year after Washington's coup

One year since President Aristide was kidnapped

On Sunday 29th February 2004, the democratically elected President of Haiti, Jean-Bertrand Aristide was forced out of his home by personnel from the US Embassy in Port au Prince, who threatened him and his family, pushed them onto an aircraft and transported them to the Central African Republic. 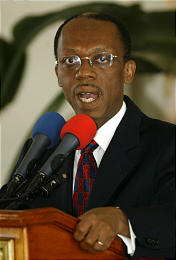 Why? Because Aristide's progressive policies in Haiti were stepping on a few toes and were making the ruling elite of this country, which has close ties to Washington, unhappy. Out with Aristide went the schooling and literacy programs and the policy to redistribute the wealth in Haiti, a shining example of a tiny fraction of Haves owning more than the vast number of Have-nots.

Claims that the Haitian President had resigned were quaffed at by Aristide himself, who told Congress member Maxine Walters from the Palace of the Renaissance in the Central African Republic that he had been kidnapped.

The day after his kidnapping, the opposition forces ran riot, murdering tens of Aristide supporters, ransacking shops, looting and freeing criminals from prisons. They then started to blockade convoys of food  run by the UNO. The opposition, around 8% of the population, led by members of the 1% representing the country's elite, who hold over half of Haiti's wealth, had been running a campaign against President Aristide since he began a program of progressive policies.

A mixture of murders and accusations against the President formed the backbone of the opposition's policy, which was supported by Washington, which said nothing of the attacks  and killings they perpetrated, yet were the first to brand Aristide's supporters, from the poorer section of society, as "militants" if there was any retaliation.

The Bush Administration immediately saw its chance to seize power in the region, financing and equipping the fascist Convergence for Democracy, composed by supporters of the hated former dictator Duvalier, and the Group of 184, a pro-business group.

The Convergence is led by paramilitary members of FRAPH, who, backed by the CIA, had carried out the coup against Aristide in 1991, in which 5.000 people were murdered. The Clinton administration later reinstated Aristide, the country's first democratically elected President, in power in 1994.

The Convergence has strong ties with Haiti's elite and with the US Republican Party, which aids it through the National Endowment for Democracy and the International Republican Institute. Washington also intervened directly by strangling the island with a blockade, at a time when thousands of people were starving.

All that President Aristide did wrong was to raise the minimum wage, which would ruin the country's sweatshop owners who are in turn supported by Washington. He had been forced to implement a reduction of tariffs on rice imported from the USA, which bankrupted thousands of Haitian farmers and had been forced to maintain the subsistence wage of 1.60 USD per day to keep Washington's friends happy in their sweatshops, producing cheap goods for the US market.

At what human cost?

What terrible crimes. We see clearly and yet again where the hearts and minds of the Bush administration lie.