The hypocrisy of Western realpolitik

The different standards followed in the cases of Slobodan Milosevic and the Albanian terrorist Agim Ceku show the true mettle of the western realpolitik – based on an absence of values and a total disregard for common decency, the rule of law and any civilized precepts of policy making. 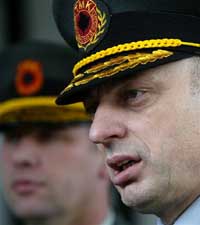 The hypocrisy of Western realpolitik

The history of the Kosovo Liberation Army is badly documented in western circles but is extremely well documented inside Serbia. The KLA (Ushtria Clirimtare e Kosoves, in Albanian) was responsible for countless acts of terrorism and crime, selling women into prostitution, selling arms illegally and trafficking drugs from Afghanistan and Turkey onto Europe’s streets.

The leaders of this band of terrorists, aided and abetted, funded and equipped by eternal bedfellows Al-Qaeda and the CIA, have been treated with astonishing leniency by the west, which thought nothing of kidnapping and detaining Slobodan Milosevic illegally, forcing him to undergo an unfair and unbalanced trial and then denying him the conditions which would have saved his life.

Compare this with the fact that the newly-appointed Prime Minister of Kosovo, Agim Ceku, has been dropped from the list of wanted persons by Interpol just because he was appointed by the Albanian-dominated Parliament, despite the fact that Serbia has an international warrant for his arrest, along with Hashim Thaci, co-leader of the UCK, on suspicion of war crimes.

If the west has problems remembering why Ceku was on the list and then removed, let us jog their collective memory. He was on the list because as a brigadier-general in the Croatian Army, he had been responsible for masterminding the massacre of Medak (1993) and then Operation Storm, the US-backed ethnic cleansing of 200.000 Serbs from Krajina (1995), where shocking acts of barbarity were perpetrated by the Croatian forces amid acts of terrorism with the complicity of the USA against Serb civilians. The International Criminal Tribunal itself has declared that during this massacre, “In a widespread and systematic manner, Croatian troops committed murder and other inhumane acts upon and against Croatian Serbs." As a co-leader of the KLA, he was responsible also for the massacre of Serb civilians.

Yet why is Ceku free and why is Milosevic dead?

The reason why is because Ceku is the darling of Washington since he was willing to do as he was told and allow the Balkans bloodbath to unfold, orchestrated by his American masters who had already decided that the guys in the black hat were the Serbs.