America: Made in China

I seldom watch TV because I can’t stand commercials, so I buy movies and TV shows I like on DVD. And I am partial to older movies and television shows, which are often only available on DVD anyway. Recently I found myself with little in the way of video entertainment to watch, so this morning I went to one of my favorite venues, Fry’s Electronics, to buy something new to watch. 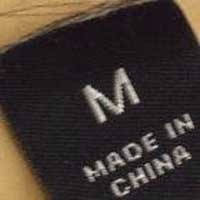 America: Made in China

Some Americans might know of Fry’s. I believe the store was founded in the 1980s in Sunnyvale, California. It started out as a one stop shop for computer stuff and electronic parts. If there was a computer part or electronic part made, it could probably be found at Fry’s. They also had a huge library of computer books and computer software. For a computer geek like me Fry’s was heaven on Earth when I moved to San Francisco back in the 1980s. Fry’s had a sense of fun too. Many of its stores were decorated inside and out to conform to different themes. For example, the Sunnyvale store looked like a giant integrated circuit chip from the outside, and was suitably decorated on the inside. The San Jose store, my favorite, looked like a Mayan pyramid on the outside, with a faux evening sky and palm trees inside.

As I entered the store a fun idea entered my head: What if I randomly selected items off the shelf and examined where they were manufactured? So taking a circuitous route to the back of the store where the DVDs are, I began randomly pulling diverse items off the shelves, trying to ascertain where they were made. I looked at USB memory devices, empty DVD/CD cases, luggage, dual layer DVD writers, extension cords, hand tools, 400 GB external hard disk drives, appliances, computer speakers, all kinds of things.

The results of my very unscientific poll were even more surprising than I expected. Eight or ten items I examined were Made in China. One or two were Made in Taiwan, which I pretty much regard as China. One was Made in Thailand. An electrical extension cord was Made in Indonesia. A single item, a can of compressed air for blowing away dust, was Made in USA.

Two ironies struck me. First, that the only item Made in USA was a can of ethereal nothingness. And second, that I selected “Dallas – The Complete Third Season” to purchase. Not only does this TV show depict a bygone era of American history, the late 1970s, when America was still a great nation, but here I was buying this quintessential American television show in a store where everything for sale is made elsewhere. Although I scanned every square inch of the “Dallas” DVD box, I could not determine where it was made. It wouldn’t surprise me in the least if it, too, was Made in China. That would be a supreme irony.