Holocaust of Animals in the World

This is the daily horror of the animal holocaust: 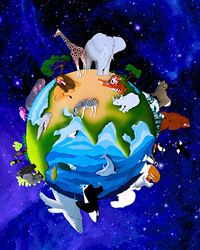 Holocaust of Animals in the World

- A Chinese seizes the next dog - that looks full of horror on the scenery before his intelligent eyes, than he pulls the skin and fur over the dog's ears and throws the tortured naked body alive on the next hill of a mass of dying dogs and cats. The Nazi seizes the next Jew and does not open his blood artery, instead he throws him in the gas-chamber in Auschwitz, Zyklon-B behind and waits half an hour before burning the dead body.

- A Russian sends his beloved dog in a deadly fight and happily gets the prize of 1000 dollars from the owner of another dog torn in pieces. Than he walks to the next whore and fucks that blond beauty with the blood money, resulting from the misery of an animal life.

- The Swiss do not ask for Pit Bull dogs to get forbidden, these unnecessary monsters, after a child having been torn in pieces by three of them. They just wish the owners of such dogs to be gently educated in order to prevent further killing.

- The pharma-expert seizes an ape and injects him some unknown stuff in his veins and looks if - without any animal tests - a human being would have been tortured from the pain resulting the medicament. The CEO of Novartis and other crazy entities seize their salaries of over ten million a year and live, without testing their own intelligence, in luxury for a lifetime.

- The poultry farm is full with millions of chicken where they "live" their short and useless struggle. They are the true living-dead. In fact, many are dead even before the slaughtering even starts. Come some epidemics over homo sapiens, millions of them are thrown alive in open fires or buried alive to prevent human beings to be the next martyr, thrown by millions in huge open graves.

Billions of animals lived and still live today in a true holocaust. Every day, millions of animals are tortured because of humans needs for flesh and tests. Animals have eyes like our children, they think with brains, they have nerves, they have feelings, they feel pain just as we do. We only know for some years how intelligent dolphins and apes are; we don't know yet how intelligent crabs are (thrown alive in boiling water) and rats and cats (mistreated in terrible experiments). What in fact do human beings actually know?

There are several Gods in heaven, created by Jesus, Mohammed, Buddha, new-born-Christians and some other guys. Reason: Human beings cannot live without the idea of a living God. In fact, there is just ONE God with us, but we don't know anything about him. But this God has a laptop on his knees and writes - right now - the following lines: "I must stop this torturing to death of animals by this stupid Homo sapiens. He believes that he is equal to me, that he can play his own god. He not only kills and tortures in many countries other human beings. He tortures and kills any animal he can get. NO, that species is not good enough for me. One planet is not enough for that being. He destroys wilfully his own platform of living, the Earth, for the idea that at the end, money, shares and bonds can be eaten in his casino-world. Let's get rid of him. Send him some pandemics, let him poison water and air with his waste, his planes and cars - and than wait and see how long he can possibly survive…."

He puts the computer aside, the only and one God, organises the last Hollywood-party with some happy Popes of Rome and than disappears in another galaxy where human beings live with normal ethics and a perception of reality that is not distorted by the idea of eternal growth and wealth. That's all folks for today. And now live happily ever, together with your beloved pets, for which you would do and pay just anything….