Personality of the Week: Tony Blair

British PM reinventing himself after Iraq

The British Prime Minister has committed himself, with a mixture of determination and humility, to giving Africa a chance, canceling debt and providing aid packages which inject funds directly into national treasuries. 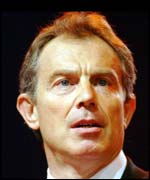 Tony Blair made his international objectives clear at the beginning of the year, in Davos, stating that during the UK's Presidency of the G8 this year, he aims to address two main themes, Africa and Global Climate Change.

At Davos, Tony Blair said that the statistics on Africa are only too well known - 300 million people without access to drinking water, 3,000 children dying every day from malaria, 6,000 people dying every year from AIDS.

"What can we do?" was the question Tony Blair asked.

For the British Prime Minister, repeating the same approaches followed until now evidently does not work because every year the same reports with the same figures (or worse ones) are churned out and the benchmarks of the Millennium Development Goals fade further and further away into the distance.

For Tony Blair, the only way forward is a partnership between African governments and the more developed countries. He described the former donor-receiver relationship as "patronizing". Under this new approach, institutions would be set up to help African governments implement good governance programmes, aiding them with legal, fiscal, trading, corruption reduction and political systems.

Tony Blair cited the good examples of the New Partnership for African Development (NEPAD) and the African Union.

Tony Blair has been preparing his Africa policy for some time, for in May 2004, he set up the African Commission, which has been studying the continent's problems and drawing up plans for solutions, to be presented in March this year, before the G8 Summit in June. Half of the Commission's members are Africans.

Another mechanism favoured by Tony Blair is the International Financing Facility, under which a 50-billion USD fund would be set up for aid programmes. The British Prime Minister believes that without external support, the Millennium development Goals will not be reached.

Tony Blair also wants a total cancellation of the debts of the world's poorer countries to international financial institutions, wiping the slate clean and helping them to be able to compete on equal terms. "We have to open up our markets and cut our subsidies", he declared.

With this speech, Tony Blair was the first leader to take this enormous stride in addressing the imbalance caused by the World Trade Organization preaching freedom of trading practices and practicing something totally different: protectionism through imposition of import duties and allocation of subsidies, making sure that the rich remain rich and the poor, locked out.

A good example of Tony Blair's policy for Africa is provided by Zambia.

London's Department For International Development (DFID) stated this year that if Lusaka satisfied the benchmarks stipulated under the IMF and World Bank directives for Highly Indebted Poor Countries (HIPC), it would cancel the totality of Zambia's debt to the UK, around half of its total external debt.

Apart from the debt cancellation policy, London decided to implement an aid package, worth 350 million USD, injecting funds into the national treasury, awarding 235 m. USD in cash for debt repayment and development schemes and a further 111 m. USD over the next three years.

Zambia is one example of Tony Blair's policy for Africa. Some call it the Marshall Plan. However, it would be fairer and more accurate to call it the Blair Plan, since Tony Blair is the pioneer in this policy of creating the conditions for the less developed countries to have a better chance to be competitive and thereby qualifying themselves to receive programmes to ensure sustainable development processes.