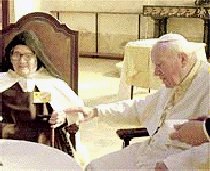 The last living seer at Fatima dies peacefully at 97

From May to October, 1917, three Portuguese children, Jacinta, Francisco and Lucia, saw Our Lady appear on the thirteenth day of each month at Cova da Iria, Fatima, in central Portugal. This Sunday, also the 13th, Lucia, the last survivor of the three, died in Carmelo de Santa Teresa, Coimbra, where she had lived in seclusion since 1948.

Lucia de Jesus was born on 28th March 1907 in Aljustrel, Fatima. When she was ten, she and her cousins Jacinta and Francisco, who both died young (10 and 6 years of age, respectively), saw the first of the apparitions of Our Lady, in which three secrets were revealed.

The first secret was a vision of Hell, accompanied by a request from Our Lady that more people should pray the rosary. The second was about Russia, in which Our Lady revealed that this country was going to convert to Christianity, but that it would be necessary for all the bishops in the world to be together to request this conversion. Sister Lucia explained that they did not need to be together physically, but in communion, in their
dioceses.

The third secret remained with Lucia until 13th May 1981, when Pope John Paul II was shot in St. Peter's Square, Rome. The Pope had asked for the dossier on Fatima, remembering that he had been shot on 13th May, the day of the first apparition of Our Lady. The secret in the dossier read "A bishop
dressed in white would go up a great hill, at the top of which there would be a great Cross and before going there he would cross a great city, shaking, half bent over in pain and suffering, praying for the souls of the bodies he would meet along the way, arriving at the top of the hill, kneeling, would be killed by a group of soldiers who would fire several shots".

Pope John Paul II saw himself as this bishop and visited Fatima the following year to thank Our Lady for saving his life. He returned twice more, beatifying Jacinta and Francisco in the year 2000 and revealing the third secret. One of the bullets that was extracted from him was placed in the crown of the statue of Our Lady at Fatima.

Sister Lucia was described by her doctor, Branca Paul, as "a very simple person but with a wisdom which is difficult to explain in words and a sense of humour which she kept until the very end".