Nelson Mandela, Ambassador of the Poor

Nelson Mandela addressed a crowd packed into London's Trafalgar Square today and called for the international community to do something about reducing poverty, instead of looking the other way. 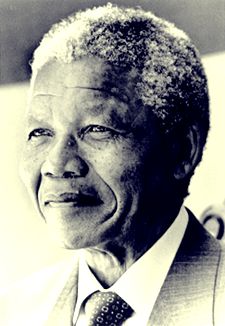 For Nelson Mandela, poverty is as unnatural a condition as slavery and its eradication is as important as the fight against apartheid. Mr. Mandela spoke on the eve of the first event in Britain's Presidency of the G8, the meeting of finance ministers on Friday.

"Make Poverty History in 2005" was the slogan used by Mr. Mandela, who likened the plight of the millions of people affected by endemic poverty to imprisonment and urged the international community to remember the promises made during the Millennium Development Goals, namely to halve extreme poverty by 2015.

The Making Poverty History campaign, a coalition of a number of organizations, wants governments of the richer countries to free the less developed countries from their debts, which hold them back as they have to pay 21 billion dollars a year to service them. The campaign also calls for fair access to trade markets.

The sheer injustice and hypocrisy in the mechanisms which form the world's commercial and financial institutions is precisely what keeps the rich countries where they are and what holds down the have-nots, making sure they never get a chance to have.

In a world where there is always credit for weapons systems but sometimes nothing else, in a world which preaches freedom of trading practices at the WTO but which then allows the richer part to impose tariffs on imports and subsidize their own producers, where is the balance, where is the justice, where are the equal opportunities?

It is wholly unacceptable that 280 billion USD can be wasted on an act of mass slaughter in Iraq while a large part of the world's population lives on less than one dollar per day, not due to their own incapacities but due to the fact that the system is stacked against them from the beginning.

The citizens of the world can translate their words into action by putting pressure on their local political representatives and political parties, asking what measures are being taken to address the issue of endemic poverty and exactly what the party or country concerned is planning to do, then following up to make sure the response is real.