Condoleeza Rice off to predictable start 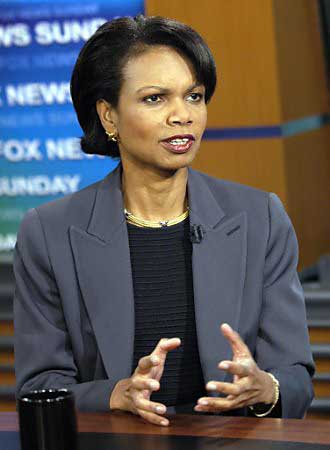 Arrogance, supercilious smarm, belligerence, intrusion and pig-headed idiocy all in one fell swoop. Not bad for a start.

Not surprisingly, Condoleeza Rice's declarations during the process to select her as the next US Secretary of State, show a lightweight, insubstantial, sour female with a bigoted sense of her self importance and yet again a total absence of the skills for the job to which she has been appointed.

Diplomacy, for Colin Powell, meant lying through his teeth at the UN Security Council, complete with satellite photographs of his magnificent evidence of Saddam Hussein's Weapons of Mass Destruction.

Diplomacy for Condoleeza Rice, apparently, is to shoot off in all directions before she has even been appointed, like somebody with either an acute case of PMT or a chronic case of the menopause. In a tantrum more befitting of a spoilt three-year-old brat, Ms. Rice declared yesterday that "in our world, there remain outposts of tyranny, and America stands with oppressed people on every continent, in Cuba, and Burma, and North Korea, and Iran, and Belarus, and Zimbabwe."

What business has Condoleeza Rice to speak of Cuba, when she is not allowed to travel there freely as a US citizen? Has she ever spoken to Fidel Castro? Has she ever interviewed Cubans to find out whether they like their government or not? Or has she limited herself to her books, this perfect example of a laboratory politician, in a comfortable office, and been told by others that the Castro government is tyrannical, probably by the Cuban mafia which operates in Florida?

Regarding Belarus, what has this to do with Condoleeza Rice? The people chose their leader in a free election. If they consider their leadership tyrannical, they voted for it.

The icing on the cake, from somebody who is supposed to be intelligent, is predictably about Iraq. First, Condoleeza Rice defends President Bush's Iraq policy, like a Rottweiler which would defend even Hitler to the death. Then she went on to state that the regime in Washington had made mistakes.

So, she defends mistakes? Then after she said that "I have never, ever lost respect for the truth in the service of anything" she declared that Saddam Hussein never accounted for his missing Weapons of Mass Destruction. Well of course not and how could he, given that they didn't exist and he said so. So he did account for them. Therefore Saddam Hussein was telling the truth. What is it with US Secretaries of State these days? Could it be the wind?

One thing is not to see things which exist and another is to see things that do not exist, in which case the pathology is more complicated. Ms. Rice is evidently one more member of a crypto fascist clique of elitist super-rich neo-conservative leeches which want to bleed their country dry as they become more powerful in the process. Unfortunately their policy is to grab the international community by the throat in so doing as its resources are siphoned off to companies controlled by Washington.

Now that Ms. Rice is so honest and so taken with the truth, maybe she would like to answer a question: If Washington was right to go to war with Iraq, Washington had to have a legitimate casus belli under international law. OK what is it and under which jurisdiction is Washington's Iraqi policy legal?

And another question, where are the Weapons of Mass Destruction, since Washington declared this to be the reason for going to war?

If Condoleeza Rice continues as she has started, her brazen and sullen arrogance will divorce Washington even further from the international community, whose reactions to the Iraqi question make it so poignantly clear that the Bush regime is out on a limb.

Finally, snide remarks about Russia and Russia's human rights record from this so-called "Russian expert" (whatever that is supposed to mean. Has anyone ever heard her speaking Russian?) will do little to build the bridges which the Bush regime seems so intent on destroying. Time to exchange smarm for charm and maybe the world can take a step forward. Together.

Whether or not this takes place during the coming four years, depends to a large extent upon Condoleeza Rice's policies as leader of her country's diplomacy.