I was speaking recently with a historian at one of our intelligence agencies. I asked if there was a period of time we could discuss openly and he said he would talk about anything that happened up to the Second World War. 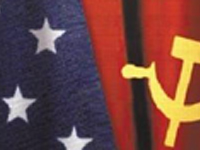 Since I was born in 1944, he was saying, in effect, that if we discussed anything that had happened in my lifetime, we would have radically different points of reference. His would include numerous details that I could never know. We might share a significant number of "facts" but we would contextualize them differently; we would index them, as it were, according to different heuristics. So we would know some of the same things but we would build the Bigger Picture in radically different ways.

We would not, therefore, know the same "thing" at all. We would think, believe, and act according to different images of reality, using an index to arrange events in a seemingly shared historical matrix to produce different results.

Several generations have lived, now, since the beginning of the Cold War and the national security state to which it gave birth. We inhabit different histories according to our need to know compartmented facts, but that need is determined by others according to parameters that we also don't know. Those who matured in this world, like fish in muddy waters, have never known real clarity, reality that wasn't mediated by simulations, or the fuller truth.

This fragmented space which undermines meaningful civil discourse was conceived as a means to counter an enemy but expanding it for several generations has turned much of the civilian population into enemies too. Investigative journalists and terror suspects are pretty difficult to distinguish these days. The devouring monster of excessive secrecy swallows us all. Millions of secrets mean billions of different possible myths depending on how facts, guesses, and conjectures are linked into patterns. "Conspiracy theorists" are inevitable when ignorance darkens our efforts to connect the dots and the dots keep moving.

Daniel Moynihan wrote in 1998 of the deleterious effects of secrecy, but he was ignored. People with power know they mostly just have to wait it out or create distractions to take our short attention spans in other directions. Anyway, it was too late to unravel the tapestry; there is not just one Penelope, there are many, there are Penelope clones everywhere, and even if they all worked together, the tapestry is too vast to unravel. Too many people have a stake in keeping it together.

The men and women who set the national security state in motion mostly meant well but they set in motion a machine that relieves us of the burden of freedom by keeping from us the truths that would enable us to use our freedom. These men and women are self-appointed and unelected. The current scandal about circumventing FISA is the tip of the iceberg, an inevitable consequence of the world we built, and only time will tell if global warming will melt more polar ice and reveal more shipwrecks in the water.

But it's deeper than that. Here's an example.

When I was twenty years old, I was invited to take an honors seminar in writing at Northwestern University taught by Stephen Spender, an English poet and editor of Encounter, a magazine those of us inclined in a literary way all knew and read. It was a premiere journal of culture, the arts and politics.

Spender was a little dreamy, off-hand in how he ran that seminar. We read our stories aloud and listened to critiques. But we perked up when Spender spoke of politics, why it looked to intellectuals like himself in the thirties as if the world must choose between fascism and communism while the democracies were mired in depression, lacking will and resolve, spinning their wheels. He spoke from a left of center point of view and we listened; we had been imprinted, after all, by McCarthy, the Hollywood blacklist, and the House Un-American Activities Committee which held raucous hearings downtown.

What Spender never mentioned was that Encounter was a CIA operation from beginning to end. He would later claim he did not know, that he was a dupe of the right as he had been a quasi-dupe of the left a couple of decades earlier. In fact, the only ones who did not know were people who did not want to know that the CIA had appointed itself a Ministry of Culture to combat Communist ideology. The agency was directly responsible for publishing houses, thousands of books, periodicals in countries all over the world, the emergence of selected composers and the success of abstract expressionists like Jackson Pollock. All those people and their products were ironically used as examples of the kinds ofliterature and art that a free society creates. Those not with the program like Steinbeck, writing of depression America and with sympathy for the poor, had to work a little harder. Doors did not open easily for them, and the covert cash flow did not carry them along like corks bobbing in a flood. (For a fascinating, fuller treatment of the subject, see The Cultural Cold War by Frances Stonor Saunders (The New Press: New York 1999).

Young impressionable people like me thought that literature and art were about telling the deepest, most complete truth we could. That was the theory we were taught, but in practice, we were deceived. The creative world in which we lived was influenced always and fabricated often by a covert political agenda funded secretly and administered by a few.

Apologists claim that these artists, some of them anyway, would have done the same work, so what was the harm? This essay is too short to illuminate all of the ways a contrived space compromises artists just as in the Soviet Union there were orthodoxies that constrained creativity. I will trust the reader to see why it is a problem to determine on a societal scale what literature and art is rewarded or punished.

Those who determine the paradigm of our thinking determine the questions that can be asked and then they do not have to worry about the answers.

Fronts, "proprietaries" and "think tanks" mask how money is laundered to hide a concealed design. In the fifties, the Geschickter Foundation funded covert medical research that included the use of chemicals and drugs to influence brain function, memory and behavior. A wing of Georgetown University Hospital was built and staffed with three CIA researchers as a "hospital safe house" (half the cost came from public funds because CIA involvement was not known.) Similarly, foundations like the Farfield Foundation, a "wholly owned" CIA proprietary, used channels like the Ford Foundation and the Rockefeller Foundation to fund the cultural life of the United States and much of the rest of the world through books, broadcast media, newspapers and periodicals which like Encounter were not known agents of government propaganda. Current alliances among universities, corporations, and clandestine sources of funding continue to obscure the links between sources and research. Mass media outlets from internet sites to publishing houses continue to be conduits of covert action. But when this activity is focused on ourselves ... what is being protected? And how is the enemy defined?

We can't know what we don't know. But when we forget that we invented a culture of secrecy on this scale, then live in it as if it is "real," the sane will sound mad and the common-sense consensus believed by most will be in fact a tale told by an idiot but signifying, unfortunately, something.

As Nietzsche said, those who are seen dancing are thought to be insane by those who cannot hear the music.

The point I want to make is that my generation and the ones after it were unaware of the depth and extent of this designer society ... yet still, after all these years, those who note its current manifestations are ignored, discredited, or ridiculed.

It is not a "conspiracy theory" to say what is obviously so; it is putting a name to the betrayal of our nation and its ideals by creating a culture of secrecy and covert action that has become the norm, wanting only enemies to name from time to time to justify itself.

But there is another, greater betrayal - the quiet betrayal of the freedom intrinsic to our humanity through our passive acceptance of this state of affairs. When we didn’t know, inactivity was excusable. But once we know, we betray ourselves by refusing to demand transparency and accountability in our affairs.

If the walls of secrecy collapsed, we like East Berliners who were suddenly free to wander into the west, would also move as in a dream, wondering with amazement at bright windows brimming with facts and truths. We would be uncertain at first how we had lived for so long without knowing what was real. But then, I am afraid ... then, like concentration camp inmates who came out after liberation, walked in circles for a while, then went back in ... we would return to the comfort and security of the only world we know.

Richard Thieme ([email protected]) is an author and speaker focused on the deeper implications of technology, religion, and science. He also writes fiction and his short story, Gibby the Sit-down King, was recently nominated for a Pushcart Prize.