Therefore the choice of this week goes to the Director of the organization which mentioned the shocking and barbaric events of Abu Ghraib and the no less shocking and horrific events of Darfur in its report, released this week. 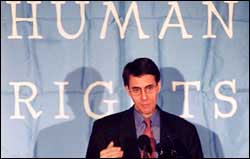 Quite correctly, Human Rights Watch attacks the indifference of the international community towards what has happened in Darfur, which is no surprise to PRAVDA.Ru since we were one of the first international newspapers to publish the story in 2004 and repeatedly brought the attention of our readers to what was going on.

Yet, as Kenneth Roth points out, the international reaction was limited to a condemnation of the killing, the sending of food and a handful of troops from the African Union. Leaving the problem to the African Union, which has only just been formed, instead of making sure this organization had the capacity to deal with the problem, shows the international community at its worst, selfish and self-interested,  boasting about collecting a paltry 4 billion USD in aid for the victims of the tidal wave in Asia when fifty times this amount were squandered on slaughtering the civilians in Iraq.

While 70.000 people were hacked to death in the most flagrant case of ethnic cleansing by the Janjaweed militia against the negro populations in Western Darfur, and 1.6 million were internally displaced, the main participants in Iraq spent 200 billion dollars on an illegal war which systematically destabilised one of the most sensitive regions on Earth, the result being what we see today: chaos.

The other main event brought up in the report is precisely in Iraq, where the scenes represented in photographs taken at Abu Ghraib prison bear a striking resemblance to Belsen or Dachau or Treblinka or Auschwitz. The sheer depravity of these acts, perpetrated under the excuse that "they did not give us any guidelines" goes hand in hand with the sheer dimension of the practice. This was not one case at one prison. It was a widespread and commonplace practice carried out by US troops not only in prisons but also on the streets of Iraq, and yet again in Fallujah when a US Marine shot a wounded Iraqi dead. "He's not dead. (shot) He is now".

Callous, cold-hearted, cruel, the face of the United States of America in Iraq.

Human Rights Watch defies the claims by Washington that these were isolated cases of torture carried out by a few individuals. Quoting the Taguba report, HRW points out that there was a systematic and endemic practice of torture and wrongful treatment of prisoners, ranging from rape to sexual abuse to beating, humiliation, infliction of pain and even murder, on a considerable scale in Iraq.

While George Bush claimed that "That's not how we do things in the United States" it appears manifestly evident that this is exactly how things are done perhaps not in the USA but by US personnel abroad.

The total and wholesale lack of respect demonstrated by US military personnel towards the Iraqi people has been a constant factor in this hideous war which was forged upon a tissue of lies from the beginning.

Kenneth Roth has worked in Human Rights Watch as deputy director from 1987 to 1993 and since then as Executive Director, bringing to the attention of the world gross breaches of human rights.

What is unacceptable is any mention of atrocities by Human Rights Watch against Human Rights in Russia, a country which faces human rights atrocities on a constant basis in Chechnya and the surrounding region by international terrorists, as we saw so clearly in Beslan. However here is the difference: Russia is conducting a military operation to stabilise a region inside the Russian Federation, where over 90% of the population voted to remain inside the Russian Federation, and does not commit its troops overseas to carry out acts of butchery against the citizens of sovereign nations.

True, Russian troops shoot at terrorists. So what? What are they supposed to do, play cards with them and give them a handshake?