Act of cultural terrorism by Brussels

Brussels intends to do away with the cruet - that set of salt and pepper and in southern Europe, olive oil and vinegar - on restaurant tables. This act of cultural and culinary terrorism shows the very worst side of Brussels' regulatory mania and is an insult to those devoted to Mediterranean cuisine. 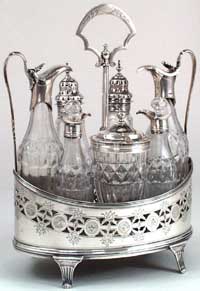 The decision has all the hallmarks of a grey Eurocrat, sitting bored out his mind in a Brussels restaurant, tucking into a meal of mussels and chips, washed down with pink beer, perhaps called delirium tremens, made by Trappist monks somewhere in darkest Belgium.

Regulate, regulate, regulate. The Eurocratic ideal runs something like this: the size of the Euro-apple must be five point three one centimeters around the girth. The delicious Portuguese bravo d'esmofe measures five point one three centimeters about the girth: destroy it! Burn it at the stake! Stamp it into the ground! Thus the Europeans will never know what it is like to eat the bravo d'esmofe, which is like standing enraptured in paradise while your taste-buds explode around you in ecstasy, a type of culinary orgasm but without the sex.

Likewise, Mediterranean cuisine. Come to Portugal in the summer and ask for a delicious portion of charcoal-roasted sardines, which are traditionally served with bread - good, Portuguese bread, not the plastic stuff from packets - boiled potatoes and a green pepper salad. Any decent self-respecting Portuguese reaches for the cruet set and pours a good helping of luxuriously smooth olive oil on his potatoes and green peppers, then mops up the remainder with healthy chunks of his bread.

Now the E.U. decides that the cruet set is anti-hygienic. Why? After it has been in use for so many centuries as part of each and every lunch and dinner table around the Mediterranean, the population seems to have survived this dangerous piece of equipment.

Could it maybe explode? Could someone spit in the olive oil and stand giggling in the corner when the next customer pours it all over his bacalhau a lagareiro (codfish cooked in an oven and served with potatoes in their skins, punched to break them open and then soaked in olive oil)? Or is Brussels worried about the quality of the olive oil?

People have been managing quite well until now. No, we do not want those plastic McDonald's-style sachets thank you, the ones you can never open and when you do manage to finally rip the top off, you get a free shower of some God-awful concoction which tastes of plastic. And stinks. Olive and oil and plastic are like fish and sugar.

Or is this not about regulation, for regulation's sake? After all, with all the pressing issues around the world and especially now, the European Union Eurocrats are obsessed with a cruet set? Are they so worried that we will consume too much olive oil? Are they that worried about the quality, these Eurocrats who allow people to buy packets of cigarettes complete with dire messages, warning them that they will get cancer?

So, if the olive oil in the cruet is that dangerous, how about banning cigarettes altogether?

Give me my cruet any day and allow me to pour a nice, healthy helping of olive oil and vinegar on my salad, on my peppers, on my tomatoes, in my soup, on my plate to soak up with my bread, on my olives, on my fish, on my potatoes, let me enjoy my Mediterranean diet.

It is not for no reason that the Mediterrean diet is regarded as one of the healthiest and the fundamental ingredients are the staple members of the cruet set: olive oil and vinegar. If they do not produce or use these products in Brussels, let them eat mussels, without the cruet.

Defend the cruet, I will. And I exhort our Mediterranean readers to Defend the Cruet. Set up a Cruet Defence Movement and refuse to eat in restaurants which do not have cruets on tables, or else refuse to allow people to bring their own cruet into the restaurant.

I for one will begin taking my portable cruet set into restaurants with me. Not because I am against the European Union, but because I stand up for the preservation of cultural heritage and the cruet set is the tip of the iceberg.

What we are witnessing is an Americanization/banalization/plastification of cultural/culinary habits in Europe. Ban the cruet, replace it with the plastic sachet. Start putting ketchup on your dolma, try mayonnaise with your moussaka, smother your sardines with a new green-style sauce containing Christ alone knows what and hey! why not exchange your charcoal roasted fish for a greenburger with plastic mash? Or how about a Double MackSalad with Healthfries, Freedom Chips and Democracy Sundae? Complete with three plastic sachets of sauces and a shitty plastic toy which might disintegrate in your three-year-old's mouth. Choking him to death but thank God he didn't use the cruet.

No, I'll take my chances with the cruet set, please, as people have been doing in this part of the world for hundreds of years. Cultural terrorism by Eurocrats, no thanks