Man of the week: Nelson Mandela

A shining example for Africa and for the world

Dubbed by many as a terrorist due to his lifelong devotion to defending the rights of his people, Nelson Mandela faced a stark choice upon his release from prison as President de Klerk opened South Africa to the international community: follow the path of his diabolical wife of the time, Winnie or become a World Statesman. 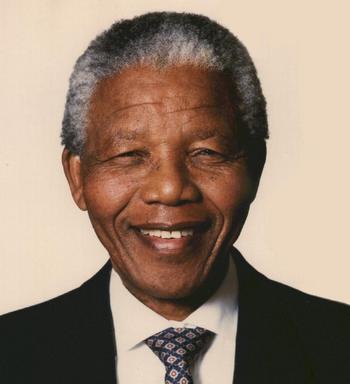 Nelson Mandela had and continues to have the humility, courage, common sense and intelligence to take the second option. His constant appeals for peace in South Africa have averted the bloodbath that many feared would happen. This week, Nelson Mandela had the courage to step forward and to come out about the cause of his son's death: AIDS.

In his three years of work campaigning for and organizing a new approach towards this disease in Africa, “openness” and “honesty” were the catchwords coined by Nelson Mandela, catchwords which he now translates into practice.

Being open and honest about this disease is about spelling the whole story out for the citizens of Africa, particularly Sub-Saharan Africa, where the denial surrounding HIV/AIDS is fanning the flames of ignorance which in turn create a perfect breeding ground for a prevalence of this deadly disease.

Raping a virgin to gain protection against AIDS is much more than a newspaper story. It is still a reality in many countries in this region and the belief runs that the younger the virgin, the greater the protection. This does not mean only five-year-old girls. It means new-born babies.

Sub-Saharan Africa is home to 60% of the world population infected by HIV, numbering 25.4 million people. The figures are as shocking as they are cruel:

3.1 million people became infected with HIV in 2004
2.3 million died of AIDS in 2004
Almost 7 % of young women between the ages of 15 and 24 are infected
Life expectancy has dropped below 40 years of age in nine countries in this region:
Botswana, Central African Republic, Lesotho, Malawi, Mozambique, Rwanda, Swaziland, Zambia and Zimbabwe.

South Africa is the country with the greatest number of citizens infected with HIV/AIDS in the world, with 5.3 million people HIV-positive in 2003.

However, it is not only Africa that is affected by AIDS. Nelson Mandela's push for truth and openness, the perestroika and glasnost of Gorbachyov fifteen years on, is extremely valid for Eastern Europe and Central Asia, which affects a great number of ex-Soviet states.

In less than a decade, the number of HIV-positive citizens in Eastern Europe and Central Asia has risen nine times. 210,000 people were infected with HIV/AIDS in 2004. 60,000 others died.

With between one and two per cent of the population intravenous heroin and cocaine users, the Russian Federation is a breeding ground for hundreds of thousands of new infections every year. Between 30 and 40% of Russia's two to three million intravenous drug users share syringes. If 25% of drug users are infected with AIDS, according to the latest UN statistics, this would indicate a possible worst-case scenario of between 700.000 and 1.200.000 new infections every year.

Of the 45.000 people who need anti-retroviral treatment in the Ukraine, the UN estimates what only 500 are receiving it on a regular basis. In Latvia, the number of new infections has risen by five times since 1999. In Estonia, the number of infected people rose from 12 in 1999 to 840 in 2003, in Lithuania, the number increased five-fold just between 2001 and 2002.

None of the ex-Soviet Republics are free from this scourge, in which ignorance, hiding the truth and lack of information is the population's worst enemy. As Nelson Mandela has said, and has put into practice, openness and honesty, the truth, is the key towards attacking this disease on a multitude of levels, using a combination of science and education as the main weapons in this fight.