Cartoons of Jesus printed in Islamic magazine would infuriate many Christians

Insolence borne through immaturity and over-reaction responsible for flashpoint 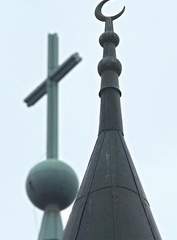 Cartoons of Jesus printed in Islamic magazine would infuriate many Christians

Future generations of Mankind may look back on the chapter in our development we see unfolding before our eyes with incredulity. On one hand, childish cartoons creating an unnecessarily provokative stance at a delicate moment in time and on the other, over-reactions which gain many more enemies than friends, have culminated in wanton violence, an increase in ethnic and religious tensions and talk about a clash of civilizations.

However, it is nothing of the sort and any attempt to mix religion into this melting pot is as potentially dangerous as it is misguided. The first point is that the Moslem religion, based upon the Qu’ran and for some, teachings from elders and scholars, preaches peace and brotherliness just like any other. The second is that to read a religious motive into the Moslem backlash would be to paint a Christian motif into the cartoons published in certain western European newspapers.

In general these cartoons were as provocative as the one showing Pope John Paul with a condom on his nose, which created a furore among certain Catholics in Portugal a few years ago, yet none of these set about burning down buildings or carrying banners calling for beheadings and massacres.

While freedom of the press involves what it says, freedom brings with it responsibilities and at a moment in time when more extremist Islamists are able to make their voices heard through acts of violence, while at the same time western forces are engaged in an outrage against international law and civilization in Iraq, where civilian infra-structures were targeted with military hardware, where thousands of innocent people have lost their lives as a direct consequence of the illegal US-led invasion, a more constructive comment could have been made than depicting Mohammed with a bomb in his turban or making snide remarks about Heaven having run out of virgins.

Many Christians would be infuriated if an Islamic magazine printed cartoons of Jesus cross-dressed as a baller dancer performing the sort of acts certain members of the US Forces perpetrated in Abu Ghraib, many Jews would be outraged if a publication were to print cartoons with captions about gas chambers and ashtrays.

Yet such “jokes” should be met with the derision they deserve and taking them seriously only adds fuel to the argument that they managed to do what they intended to do, that is, score cheap points at the expense of a different ethnic or religious group.

However many Moslems we see protesting in the streets, for sure there are far more who shrug their shoulders and say how childish the cartoons are, and many others may even have a laugh. The Moslems protesting on the streets, setting fire to property and calling for massacres and beheadings are but a tiny proportion of those who follow this noble religion, yet there are those who would paint these incidents as a war of worlds, a clash between civilizations.

While it was unnecessarily provocative to publish such cartoons, it is also a fact that non-Moslems cannot be held hostage by the sensitivity of its more extremist followers who are looking for a spark to light a fire. At the end of the day, more serious incidents have been created by marauding and drunken football hooligans for far less.

Yet again, it is a case of a few extremists on both sides who try to hog the limelight with their exaggerated actions and reactions, with the flames ably fanned by a mass media thirsty for fame and hungry for copies sold.

Where are the stories about the millions of cotton workers in Western Africa affected by the USA’s decision to award subsidies to its cotton producers despite preaching free and fair trading practices?