Ukraine crisis: A Western circus with Yushchenko, the clown 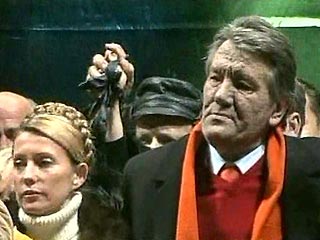 The Ukraine crisis is for the Ukrainians to decide

It is not the business of Washington or London or Ottawa to decide whether they accept the election results in the Ukraine. It is for the sovereign Ukrainian institutions to solve the process through the proper and existing legislative process, namely an examination of the complaints by the supreme court and the subsequent publishing of the results.

After this, the new President will be announced. It is a simple, clear process and the Ukrainians are capable of solving their own problems without outside interference from the countries who are dying to install Yushchenko, no doubt so that lucrative arms contracts can be delivered to NATO and military bases set up on Russia's borders.

And who is Tony Blair to make any declarations, now that members of his own party wish to impeach him for gross misconduct in leading the country into an illegal act of butchery in Iraq baced on barefaced lies?

The strongarm tactics used by the western stooge, Yushchenko, are typical of the anti-democratic processes set in motion by a rampant and militant Washington, crushed in the grip on a monetarist, neo-conservative crypto-fascist clique of elitists, whose corporate greed speaks louder than the mores of internacional diplomacy and whose thirst to dominate the
world's resources in the lifetimes of Rumsfeld and Cheney throws any moral concept into the trash bin.

Yushchenko himself has set himself up as the worst type of unprofessional clown playing the fool in public. His "swearing in" ceremony in a parliament without a quorum was as classic a case of his foolishness as has ever been seen. Why didn't he place a piece of parsley over each ear and stick an apple in his mouth, and claim he was a pig, as well?

Playing this type of childish game gives Yushchenko as much authority as a drunken down-and-out, lying on the floor of a public latrine in a pool of urine, with a bottle by his side, saying he is the president, that he is a doctor, that he is also a cosmonaut on Thursday afternoons and if it hadn't been for Eltsin, he would also be God.

Next time, why doesn't Viktor Yushchenko wear a baseball cap and a skirt, with a plastic red nose and his face painted like the clown he is?