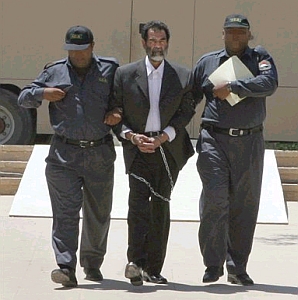 If Saddam Hussein is in court, why isn't Bush?
Saddam Hussein is accused of a number of crimes committed during his Presidency of Iraq. An analysis of four years of government under the Bush regime reveals some shocking parallels.

Saddam Hussein is accused of being responsible for acts of torture committed during his presidency.

However, George Bush was President when the prison at Abu Ghraib in Baghdad was turned into a medieval torture chamber by US military personnel and George Bush is today President and the tortures continue at Guantanamo Bay.

Who would ever have thought that a President of the United States of America would have to defend himself against accusations of torture? And more than accusations, they are fact.

Does George W. Bush think he can target civilian infra-structures with precision weaponry, destroy sewage and water and electricity supply systems, hand the contracts without tender to his friend Richard Cheney and walk free?

Are the United States and the international community not ultimately responsible for millions of deaths inside the Iraq that Saddam Hussein was trying to govern, his task made impossible just because he refused to allow the Americans access to control his economy?

Saddam Hussein is accused of attacking three neighbouring countries. However, how convenient it is to forget that Saudi Arabia was attacked in a very small incursion during the First Gulf War and Iran was attacked with the full blessing and support of Washington. Rumsfeld even went to Baghdad to pat Saddam on the back and shake his hand, although later he had difficulty in remembering what he had done.

And was the invasion of Kuwait not due to the Kuwaiti authorities performing acts of cross-drilling, stealing Iraq's oil? And was this invasion also not due to a need to defend Iraq's economy because Kuwait had been told by Washington (as a provocation) to reduce its oil prices? And was Kuwait not warned several times by Iraq that it was ruining Iraq's economy and that the only way out was war? Did the international community listen to Baghdad? No.

It did not. Washington had created the monster by arming Iraq to the teeth and decided to launch phase two, which was substituting Saudi Arabia by Iraq as its strategic base in its attempt to take a stranglehold of the resources in the Middle East and in Central Asia and sit on Iraq's vast oil wealth.

On the subject of illegal invasions, did George Bush not commit the same crime he accuses Saddam Hussein of, in attacking Iraq outside the UN Charter? This invasion was based on lies, bullying, blackmail, cajoling, forgery. Where are the Weapons of Mass Destruction? Did the Bush regime not show maquettes of models with satellite photos, complete with arrows and affirmations like "We know where they are"? So, where are they?

Saddam Hussein is accused of using chemical weapons against the Curds. Who sold them to him and what type were they? Did Washington say anything when gas was used to stop the Iranian army breaking through? Is Depleted Uranium not a form of chemical weapon? Is the act of dropping cluster bombs into housing estates any better?

Or is George W. Bush, President of the United States of America, nothing more than a barefaced liar, as well as a mass murderer and a war criminal?

In which case, why isn't he in the dock alongside his country's former buddy and comrade in arms, Saddam Hussein?

Or is George Bush above the law just because he was born in the US of A? Welcome to freedom and democracy, winning hearts and minds by blasting the legs off six-year-old kids playing in their back yard, in their city, in their country. And the crime goes unpunished?