Americans on the run 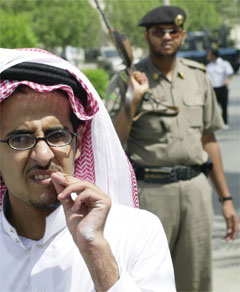 US tells its citizens to pull out of Saudi Arabia

The United States of America has told its nationals to move out of Saudi Arabia after a weekend of violence which saw 22 people killed and 50 foreigners taken hostage.

41 hostages were freed from the Oasis compound in Khobar on Sunday morning by Saudi special forces after nine people were executed with their throats slit after trying to escape. Further violence on Saturday night left 22 people dead (8 Indians, 3 Filipinos, 3 Saudis, 2 Sri Lankans, 1 American, 1 Italian, 1 Swede, 1 South African, 1 Briton  and 1 Egyptian). 25 others were wounded.

A nationwide search is under way for three gunmen who are believed to have escaped. According to one eye-witness, reported by the BBC, security guards allowed them to escape after a deal was made, offering them freedom is they did not blow up the compound, which houses ex-patriate company executives.

However, this version has been strongly denied by the Saudi Foreign Ministry, which claims that there was no collaboration between the terrorists and the security forces.

Intelligence sources claim that it is probable that such attacks will increase in future, since there are believed to be tens of militants ready to hit soft western targets across the country.

The illegal act of butchery perpetrated by the United States of America and the United Kingdom in Iraq, based on lies, greed and forged documents, will have done nothing to increase the safety of westerners in the area or elsewhere.

All the reasons for tit-for-tat terrorist attacks were provided on a silver platter by these regimes, who perpetrated the most shocking and callous act of mass murder in recent history, bombing civilian homes, strafing infrastructures necessary for life support, murdering ten thousand innocent people, mutilating 35,000 others, dropping cluster bombs into civilian areas, contaminating large swathes of territory with Depleted Uranium ammunition, knowing that this is a war crime.

It is hardly surprising that as a result the nationals of these two countries in particular and of foreigners in general are regarded with hatred among Arabs who see in the sorry spectacle which unfolded before their eyes in Iraq that Washington and London are the enemies of the Arab nation and as such, through the wanton violence they perpetrated, set themselves up for attack.

George Bush and Tony Blair have done more to damage international security than any other leader in history since the Second World War.