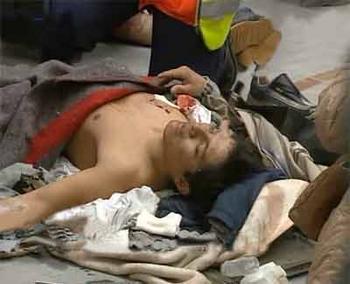 How the choice of vocabulary can manipulate public opinion.
Freedom fighter, resistance hero, murderer, terrorist, criminal or separatist? Soldier or operational, platoon or cell? Was the outrage committed in Madrid yesterday which has darkened the hearts and lives of thousands of Spanish families an act of terrorism or collateral damage?

The international press has already decided that it was the former, whether perpetrated by ETA or Al Qaeda. The Spanish government was quick to place the blame, claiming that there was a 90% chance that Euskadi Ta Azkatasuna (Basque Homeland and Freedom). In either case, this act plays into the hands of the rightist forces in Spain and in the USA.

If ETA or an ETA splinter group was responsible, two days before the general election, it would influence the floating voters to back the Partido Popular of Aznar, which has taken a hard stance against this organization, bringing a bonus to Aznar's party, even without him as Prime Minister.

On the other hand, if it was the responsibility of Islamist fundamentalists, it would be a bonus for George Bush's campaign against international terrorism and a confirmation that Al Qaeda in fact exists as an organised internationalist organization. Some hours after the attack, a mysterious van was found with seven detonators and a tape with verses from the Qu'ran. (Why should a cell place ten bombs and carry seventeen detonators and anyway, were the bombs not placed at different stations?) An e-mail was also received by an Arabic newspaper in London (since when was an e-mail valid evidence?)

Whatever the case and whoever the culprit is behind this outrage, what is the correct term to define it?

Under Franco's government, the fathers and grandfathers of today's leaders of ETA were tortured, killed. Their culture was suppressed, their people imprisoned for their beliefs. From this organization's point of view, human casualties are bargaining chips for successful negotiations. The more the casualties, the better the marketing.

However, what legitimacy does ETA have to perform such acts of mass murder against people going about their daily lives, who have nothing to do with the decision making process?

Not all the two million people who live in the Basque country are Basques and anyway there is disagreement as to what is Euskadi (does it include Navarre or not?). Of the Basques, only around 25% support the Partido Nacional Vasco and even less, Herri Batasuna (the outlawed political mouthpiece of ETA). Therefore with less than a quarter of the population of their own homeland behind them, in whose voice do these elements speak?

The argument that ETA normally attacks military targets or makes a warning telephone call before an attack is false. In July 2003, bombs were placed indiscriminately in Alicante and Benidorm and later, in a car park at Santander airport. 13 people were injured. Luckily, nobody was killed.

Recently, ETA has made declarations that a large-scale incident was being planned and last week, a huge cache of explosives was intercepted on its way to the capital city.

If it was ETA, and the evidence is more than circumstantial although the motive is weak at this particular time, it should be remembered that this organization has scant support and exists to fuel the needs and bank accounts of the criminals that control it. Nothing more.

Regarding Al Qaeda, the argument is complicated by Washington's primary reaction to September 11th, a black-and-white response to a world coloured in carious shades of grey, a knee-jerk, eye-for-an-eye reflex action which was bound to produce more reactions.

It was an act of butchery, based on lies, forgery and deceit. It went against every tissue of international law, it disregarded the international community, it disrespected the United Nations. Washington's cajoling and bullying forged a reluctant clique of sycophants, one of which was Spain, not the Spanish people.

They are all outrages, they are all acts of horror, terror. Tears taste of salt, whether they are shed by Iraqis, Spaniards, Afghans, Americans, Palestinians or Israelis. One type of attack is not more right or less wrong than another. The stupidity and blind arrogance of the Bush regime has thus placed the USA in the same bag as every terrorist organization that walked the earth.

As for Al Qaeda, or whatever perpetrated the act in Madrid, why be so cowardly as to attack innocent  people going to work and why not have the courage to at least attack those who made the decision to join the USA's circus of mass murder as it spreads its tentacles around the globe in a stranglehold?