The truth about modern day America 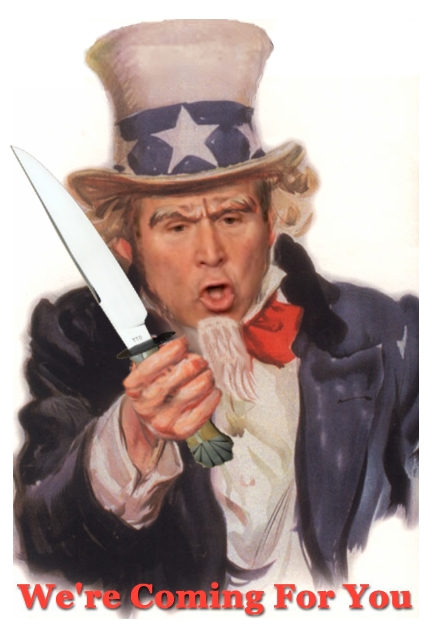 In fact, the hypocrisy of modern day America reminds me of an event that occurred in my youth.  I was playing pool with some friends in a neighborhood billiard hall when, around two o'clock in the morning, three sizable individuals walked in and proclaimed they were looking for some "action."  As they proceeded through the establishment, an older gentleman exiting the restroom had the misfortune of passing near them.  The tallest of the three intentionally shoved this man, then challenged him to a fight.

Thirty seconds later the bully lay battered and bleeding upon the floor. Yet, despite being the instigator of the fight, he still had the audacity (once he recovered his senses) to whine that he was a "minor," and thus it had been "unfair" to hit him.

This true life story is also symbolic of the bullying hypocrisy of America's so-called "conservative" movement, which persistently engages in dubious political tactics, yet cries "foul" when similar tactics are directly against it.

Recently, for example, many "conservative" critics expressed indignation over political ads submitted to Move On that compared George W. Bush to Adolph Hitler.  Yet this "conservative" outrage was conspicuously absent when right-wing commentator Ann Coulter equated television personality Katie Couric to Hitler's mistress Eva Braun, and when right-wing radio personalities routinely referred to former first-lady Hillary Clinton as "Hitlerly Clinton."  Radio propagandist Rush Limbaugh coined the phrase "femi-nazis" when describing the women's rights movement, and on the very day that cable television's right-wing propaganda networks (who call their bilge "news") were professing "outrage" over Bush/Hitler analogies, THE NEW YORK POST was running an article comparing Democratic Presidential candidate Howard Dean to Nazi propagandist Joseph Goebbels and Dean supporters to "Hitler's brownshirts."  Yet none of these individuals or groups equated with Nazism, besides Bush, have remotely come close to deceptively leading a nation into war, nor corruptly assumed power in defiance of the will of the majority.  In fact, according to THE VILLAGE VOICE, even the wife of British Prime Minister Tony Blair, Bush's partner in deceit, believes that Bush stole the 2000 election.

But perhaps nowhere is this hypocrisy more evident than in the right-wing's sycophantic defense of its favorite drug addict, Rush Limbaugh.  During the Clinton years, Limbaugh incessantly raved how even the president is not above the law.  Yet now that the law is targeting him, he wants to play the role of martyr.  Limbaugh also supported the deceptively named "Patriot Act," whose draconian provisions have destroyed many of the rights and freedoms true patriots have fought and died for, including the right to privacy.  But now that it is HIS right to privacy allegedly being violated, Limbaugh is suddenly ranting about unfairness.  Perhaps most egregiously, Limbaugh announced in 1995 that "Too many whites are getting away with drug use . . .  The answer is to go out and find the ones who are getting away with it, convict them and send them up the river."  Now predictably he is endorsing "treatment" over incarceration.

But perhaps the biggest reason the so-called "conservatives" have been allowed to get away with their lies and hypocrisies is because they have taken for granted the fact that, when attacking liberals, they are fighting opponents who have one hand tied behind their backs.  Liberalism, by its very essence, is a political philosophy encouraging people to expand beyond their self-centered worlds, to advocate humanity instead of hatred, to appeal to positive emotions instead of basest ones, and to put people before profits.  The reason dictator Bush endeavors to describe himself as a "compassionate conservative" is because the adjective "compassionate" is not automatically attributed to the word "conservative." Of course what Bush doesn't acknowledge is that his "compassion" only extends to rich, white people.

In liberalism, however, this compassion is implied, often to such an extent that a common political pejorative is the phrase "bleeding-heart liberal."  This ideology is so entrenched that some liberals have even expressed sentiments that Limbaugh should be treated with compassion.  But Abraham Lincoln once said, "Those who would deny freedom to others deserve it not for themselves."  Since Limbaugh has advocated the denial of freedom to drug offenders, then his freedom, if he is tried and convicted of drug offenses, should also be denied.

But what is even more contemptible and hypocritical than that bully in the billiard room are the cowards who instigate fights, then gutlessly sit back and watch others do the suffering and the dying.

I was given the first name of David after my uncle David, whom I never got to meet, was killed in the Battle of Midway during World War II.  His brother (also my uncle), survived the war, but could never conquer his feelings of guilt over living while David had died.  He lived the remainder of his life an alcoholic.

While this story is not unique, and there are countless other tales of suffering, pain and hardships caused by war and its aftermath, I think of it every time I see politicians, political commentators, and celebrities who have never served in the military glorify war--treating death and destruction like a video game, salivating over the ratings potential of warfare, and performing shows or concerts to "entertain or support the troops," so they can boast about their "patriotism," and/or promote their music on television talk shows.  The ideal of "supporting the troops" has often meant the reality of "exploiting the troops," and while these hypocrites get rich (some are even rewarded with their own "talk" shows), the young men and women they allegedly "support" continue to suffer and die.

Coulter once said that "Liberals are traitors."  But the Iraqi war and its aftermath have made it clear that "Liberals are Patriots."  Liberals chose to not simply talk about freedom, but to exercise it through dissent.  In fact many liberals exercised the greatest freedom of all, the freedom to think for themselves, and not blindly subscribe to Bush's "great lies," even though they knew his bloodlust and avarice could not be contained.  Liberals were sometimes penalized both economically and socially for their dissent, denied television roles, called "unpatriotic," and ridiculed, while those engaged in "flag-waving" profited immensely.  Liberals looked at the tax dollars being spent, and, more importantly, the young lives being lost, and recognized the folly of these resources being squandered by a thug endeavoring to exploit war to appease his father and enhance his political stature, by a venal vice- president lusting to increase the profits of companies where he has financial interests, and by a Secretary of State who, like a latter-day Judas, betrayed both the American people and the world by lying to the United Nations, all for a few fleeting years of power.  Yet, unlike Judas, none of these liars and hypocrites have demonstrated any remorse for their deeds.

Instead the populace is being bombarded with claims that "intelligence failures" were behind the failure to find "weapons of mass destruction (WMDs)" in Iraq.  I would agree.  But the intelligence failures resided in too many Americans blindly trusting the corruptly appointed Bush dictatorship, and the jingoistic and profit-driven media.  What a better nation America would be, and how differently it might be perceived throughout the world, if its military only responded to real threats, if its budget deficit was not spinning out of control, if millions of Americans did not have to fear every ache and pain because they have no health insurance, and if America's freedoms and rights were not held hostage by a megalomaniacal Attorney-General and a cowardly legal system exploiting the "war on terror" to covertly establish a police-state.  Unfortunately these realities have not yet sunk in as many Americans are experiencing an intrinsic defensive reaction to present day events--the reluctance to admit they've been conned.

Fortunately, there are still people who do have principles, whose denunciations against one political philosophy, party or candidate do not automatically infer endorsement of the other.  I say this to assure PRAVDA readers that if Al Gore were president and if he had undermined democracy, destroyed civil rights and liberties, and engaged in lies and deceptions to lead America into an unjust war, my criticisms would be identical.  In addition, PRAVDA has never suggested one idea for, nor censored one word from, my articles, and since I receive no compensation, other than the rewarding satisfaction of seeing my work in print, there are no monetary considerations to distort or influence my viewpoints.

In fact, one of the vilest acts performed by a politician, prior to the Iraqi war, was Bill Clinton's (a Democrat) failure or refusal to grant a pardon to Native-American activist Leonard Peltier, even though Clinton showed no compunction about pardoning friends and political cronies.  Through this failure or refusal, Clinton tacitly endorsed the fraudulent nature of America's criminal justice system, and continued to send the message that government agents and agencies are free to use perjury, intimidate witnesses, exploit racism, and fabricate evidence to obtain
convictions.

A few years ago, an excellent movie called THE USUAL SUSPECTS was released.  The focus of the film revolved around whether a "master criminal" named Keyser Soze actually existed, or whether he was a myth.  During this debate one character remarked, "The greatest trick the devil ever pulled was convincing the world he didn't exist."  That may be true.  But the greatest trick the warmongers, hypocrites, liars and spoiled, silver-spooned brats--who profit from America's culture of nepotism, cronyism, and corruption--have ever pulled is convincing the world they are "conservatives."