As regrettable and tragic as the crisis in Ukraine is, the ensuing peace talks may yet be the catalyst to redress long-standing sources of acrimony in the region. The course of military developments is likely to bear a heavy influence on the final outcome on the Ukraine crisis. However, the following essay is a proposal for a radical but rigorous long-term solution.

If there is one mundane fact that Russians and Ukrainians can agree on, it is that the mediaeval state of Kievan Rus is at some level ancestral to both Russia and Ukraine. Events over the centuries, from the Mongol-Turk invasion to the Bolshevik Revolution, cleaved the two apart, with Russia inheriting the classical line of descent. As its confused name suggests, Ukraine is a region on the periphery; a border-land. Its population composition reflects this buffer-state pedigree, with the north-west of the country transitionally differing from the south-east in terms of language, identity and politics.

In view of this extant polarity and the irretrievable course of events following 2014, it seems inevitable that only a national divorce and major geopolitical surgery can ameliorate such irreconcilable differences. A stable and unified Ukraine capable of being administered through Helvetic cantons is not going to happen. Typically, the entropy of such conflicts leads to a partitioning (balkanisation) or confederation. In the case of Ukraine, a combination of the two is warranted.

The unification (or re-unification) of Russia and Ukraine into a confederacy may hardly seem like a viable option at this point in time, but the question of fraternal destiny is bigger than current conflict, the Putin regime or Western intrigues. Opposition to the crisis in Ukraine has garnered significant support from all corners of Russian society. The priority while peace talks ensue should be to keep open future possibilities of merged statehood, despite the seeming remoteness such ideas currently intimate.

A mere decade ago, signatures were being collected in Moscow for unification of the states, being led by high-ranking members of the clergy.[1] Russia-friendly Viktor Yanukovych was President of Ukraine, having previously defeated the Western-allied Yulia Tymoshenko by a clear margin, reflecting the vision most voters had for Ukraine’s alignment. Then came the black ops and colour revolution.

This is not to say that the response of the Putin regime has been judicious or even consistent with its own rhetoric. From the annexation of Crimea to Donbass separatism and finally a full military invasion—under no circumstances are such actions congruent with the ethos of Russo-Ukrainian brotherhood.

Likewise, the slurring of Ukraine as a false or illegitimate state is as redundant an argument as it is tasteless. For while it may be easy to portray Ukraine as little more than a bloated toponym and vestigial entity, playing such a game ends with the Swedes claiming paternity of Kievan-Rus. Furthermore, lengthy and patronizing historical essays as published by the Kremlin[2] seem a strange way to appeal to Ukrainian sensibilities, let alone special military operations being sold as liberating crusades. Russia’s de facto policy in recent years has been to engage in territorial salami tactics on their smaller brother, while still heralding unification plans right up to the eve of the special operation.[3] Of course, with each slice Russia only forsakes the remaining territory to greater resentment. Sacrificing the whole for short term partial gains does not seem to be a worthwhile trade-off, even if such border changes are seen to be future internal ones of a common state.

Ironically, whether a Russian nationalist or union romanticist—the shrewd approach for both in achieving their irredentist goals should come down to a similar strategy. Namely, the promotion of a grandiose project, affirmative destiny, mutual and brotherly respect, unconditional commitment to equal political status, and indefatigable patience. For whatever reason, a grass-roots movement is essentially non-existent or poorly organised, and not so much as a vision or proposal overview can be easily found through official channels and amateur ranks alike.

But what might a confederacy look like? If Ukraine is to be persuaded and history is to be honoured, Kiev should be no less than a joint capital city along with Moscow. If Moscow is considered the Third Rome, then Kiev could become the Second Constantinople. Voting sovereignty would also have to be preserved at a confederal level, not limited to the decision to leave the confederacy with the borders that they entered it. With this proviso, Russia could then offer to relinquish control of Crimea and Donbass, as further enticement and gesture of good will, which would be a small gambit in view of the big picture.

At this point, the question of West Ukraine deserves special consideration on account of it (rather than Kiev) being the origin and centre of gravity for Ukrainian identity and nationalism. In fact, if there was to be any partitioning of Ukrainian territory, it should have been in the west of the country, not in the Russophilic east. Additionally, there is historical precedent for such secessionism, namely the short-lived West Ukrainian People’s Republic and earlier Kingdom of Galicia-Lodomeria. Since confederation may be unpalatable to too great a segment of Western Ukrainians, this region could form the basis for a new state: Greater Halychia.[4] 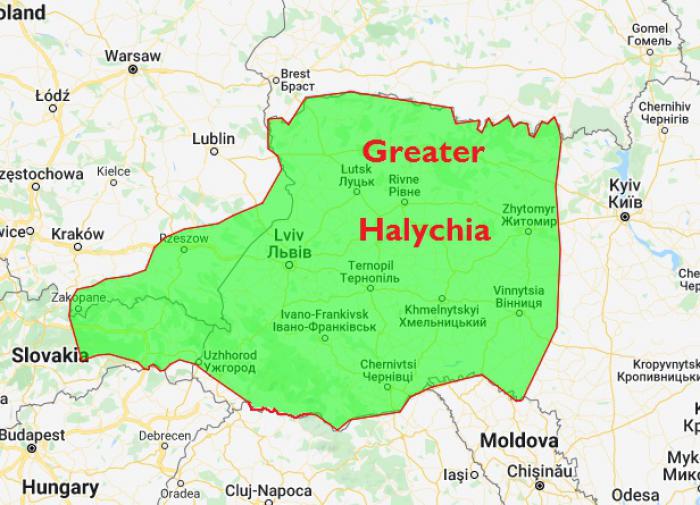 With its capital city of Lviv—worthy of being a political and cultural prominence on the European cartograph—Greater Halychia would be free to find its destiny as a Central European state; be that as part of the EU, Visegrad Group or NATO. As further incentive still, Russia could sponsor the transfer of territory from old Polish Galicia to the new state, using its exclave of Kaliningrad to barter with the Poles.[5] Poland would be only too willing to lose its border with Russia, gain prime real-estate on the Baltic; while Russia would be satisfied with new frontiers on the Black Sea, Romania and the opportunity to reunite with its long lost orphan Transnistria.

Since such a Carpathian shuffle already involves significant movement of borders, it would pay good diligence to address the Slovakia question and whether a large portion would be suited to join a Greater Halychia. When the Slovak Republic is not being confused with Slovenia, it is stereotyped as perhaps Europe’s most mediocre country—not exactly flattering but neither too insulting. The country’s population is rather polarized, with the far-Western capital having little to do with those living in the east. Among those who dwell in the eastern realms is the indomitable minority of Rusyns, for whom Greater Halychia would finally unite them all in one country. Southern Slovakia wishes to unite with Hungary, while Western Slovaks are nostalgic for reunion with Czechia. The solution is obvious.
At the very end of this chain of territorial adjustments would be Croatia, a state with its ethnogenesis in Halychia, and whose post war territorial devastation like Hungary earns it some commission from its ally in the form of territory south of Boszenfa[6]—lands blood-soaked from the heroic sacrifice of Šubić-Zrinski and thousands of Croats who saved Europe from the Ottomans.

But as convoluted a mission of international diplomacy as treaties are when involving multiple parties, the weight of universal benefit is a force difficult to restrain. Russia is the lynchpin on the battlefield as well as in the boardroom of high-stakes geopolitics. The initiative falls on the shoulders of the Russian leadership to pursue a sagacious path out of the crisis and onward to sensible nation-building. Mr President, your exemplary career in politics was forged in one of the most challenging positions of our time. You’ve had your thrill on Blueberry Hill—do not allow Ukraine to become your Waterloo.

[1] У Москві розпочали збір підписів за об’єднання Росії, України і Білорусі. 24 Вересня 2012. Українська правда.
[2] See President Putin’s essay “On the historical unity of Russians and Ukrainians” published last year.
[3] The statement of a State Duma deputy Leonid Kalashnikov three days before the launch of the special operation in Ukraine.
[4] Ukrainian: Велика Галичина (Velyka Halychyna). The English exonym Halychia is based on a compromise between the older form Galicia and the modern Ukrainian endonym Halychyna. It also removes confusion with the autonomous community of Galicia in Spain.
[5] Not an extreme proposition. Influential political thinker Alexandr Dugin has proposed returning Kaliningrad to Germany for the mere favour of securing it as an ally of Russia. Kaliningrad's maritime territory could be exchanged at a rate of one third land value.
[6] Amounts to just 5664 square kilometres, from Nagybaracska to Mohacs, Komlo & Somogybukkosd.