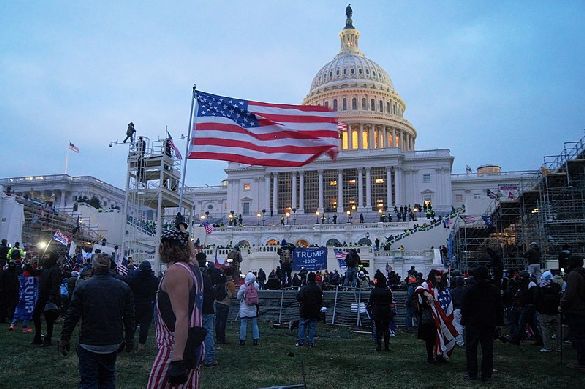 On January 6, 2021, I was proven both right and wrong:  Trump did declare war, but it wasn't against another country.  It was against the United States itself.

On January 5, 2021, Pravda.Report published my article America on the Brink of War-A Warning.  In this article, I discussed how Donald Trump's delusions about a "stolen election" were becoming more dangerous, and, as more and more avenues to "overturn" this election were being shut down, he might actually start a war against another country (such as Iran), and then use that as an excuse to declare martial law and retain his grip on power.

I concluded this article by saying that while I risked being mocked if I was wrong, that would be preferable to being right if the result was death and destruction.

Well, on January 6, 2021, I was proven both right and wrong:  Trump did declare war, but it wasn't against another country.  It was against the United States itself.

On that fateful day, Trump, and his disgusting lackey Rudy Giuliani, incited a mob of his supporters to "march" to the United States Capitol Building to prevent Congress from certifying election results that favored Joseph Biden.

Once there, followers of this self-proclaimed "law-and-order" president broke out windows and used other means to enter the Capitol building, whereupon they vandalized Congressional offices, attacked Capitol police, and forced both houses of Congress, and Trump's very own Vice-President, to be evacuated to places of safety.

Many commentators, including myself, realized that something like this would be the culmination of Trump's tenure. Throughout his campaign and four-years in office, he and his enablers sought to divide and embitter the nation, appealing to his cult-like base with a mixture of demagoguery, mendacity, racism, and hypocrisy that was devoured like candy.

The aftermath of this attempted coup or insurrection (some legal experts are even calling it criminal sedition since the Trump incited mob actually interfered with and prevented official government business from being conducted) revealed three hypocrisies that were always in evidence, but routinely ignored by Trump's Republican enablers in Congress.

The first was his vacillating view of "patriotism."  As a recent tweet from the NAACP points out, during the past few years Trump was particularly vociferous in condemning as "unpatriotic" former NFL quarterback Colin Kaepernick's kneeling during the playing of the national anthem to protest racial injustice.  In fact, many believe it was at least partially due to Trump's instigation that Trump-loving team owners and executives banished both Kaepernick and his teammate, friend, and fellow protester Eric Reid from the league.  (For more information, please see my article The NFL: Still Racist After All These Years, December 15, 2020).

Yet what were many of the insurrectionists proudly waving in the halls of the occupied Capitol building?  The Confederate flag-the flag of people who committed treason against the United States to defend their "right" to "own" and enslave human beings.  What did Trump say about them?  "We love you.  You're very special."  His daughter Ivanka even tweeted that those laying siege to the Capitol were "American patriots."

In addition, this is the same Trump who, during the Black Lives Matter (BLM) protests that erupted in the summer of 2020 after the killing of George Floyd, tweeted that anyone vandalizing or damaging a federal building should receive a "MINIMUM TEN YEARS IN PRISON."

Those with short-term memories, or those who avoid reading, watching, or listening to anything that doesn't worship their Trumpian demigod (which means they're probably not reading this), should be reminded that the groundwork for this hypocrisy was in evidence in 2017, when a cabal of white supremacists, neo-nazis, and right-wing militia groups converged on the town of Charlottesville, Virginia, allegedly to protest the planned removal of a Confederate statute.  Despite the violence that erupted, and the fact a woman was killed when one of these protesters intentionally hit her with his car, Trump called members of these groups "fine people."

Where was law enforcement?

Secondly, many journalists, activists, athletes, and even some politicians were quick to note how tepid law enforcement's initial response was when the overwhelmingly white insurrectionists stormed the Capitol building, as compared to the heavily militarized response by both local and federal authorities to the BLM protests.  Perhaps the most egregious example of this was when Trump had U.S. Park Police and members of the National Guard teargas and otherwise assault peaceful protesters, just so he could exploit a photo-op of him holding a Bible in front of St. John's Church.

Still, there is one item people are discussing that I somewhat disagree with.  Many pundits expressed outrage that some members of the Capitol police took "selfies" with the insurrectionists.  But, since they were clearly outnumbered when the siege began and thus largely unable to make many arrests, these selfies could potentially be used by police to identify and locate these individuals later.

Also, their deification of Trump may have, as the saying goes, hoisted many of these insurrectionists on their own petard.  Because Trump repeatedly criticized using a mask during a deadly pandemic as a personal affront to him, many of the individuals occupying the Capitol were not wearing one when caught on camera, thus giving law enforcement clear views of their faces to use in future prosecutions.

Of course, predictably true to form, many Trump sycophants and enablers are now trying to claim that the attack on the Capitol building was actually a "false-flag" operation conducted by their favorite bogeyman, the apparently omnipotent, omniscient, omnipresent Antifa.  But, thanks to these pictures, some of these individuals have already been identified as Trump supporters and/or members of right-wing extremist groups, which will eventually serve (to rational people at least) to make this claim as delusional as the imaginary "election fraud."

Finally, perhaps the greatest hypocrisy of all is that more than one hundred Congressional representatives, and a few Senators, who were trembling in fear just a few hours before as the Capitol building was being overrun, later endorsed the very insurrection they were hiding from, by uttering objections to the Electoral College vote and then vomiting disproven lies about voter fraud-the very lies that Trump used to incite his cult in the first place.

Yet, these traitors will continue to be seated in Congress, their lips still dripping with deceit, and their hands wet with blood.

This is why CNN's Jake Tapper was perfectly right about the state of America's federal government when he uttered this quote from Ulysses S. Grant: "There are two parties now, traitors and patriots."