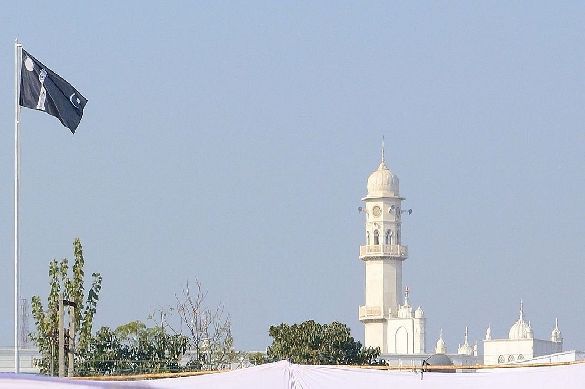 The attack in Paris, in the cathedral of Notre-Dame, seems to condemn Islam without appeal to the role of a bloody and barbaric religion. Few know instead that it was the Muslims of the Middle East who were the first to suffer the terrible price of a terrorism that is inspired by Islam only in words. Many Syrians have died atrociously in the territories occupied by the so-called "moderate rebels" whom the West believes they can be used as it pleases without paying anything for this error of assessment. Many Iraqis lost their lives, horribly, because the West lightly used militias of exalted people who have nothing to do with the teachings of the Prophet of Islam.

I don't have the presumption that I want to open the eyes of those who prefer to remain blind. However, it is not possible to let events, such as the tragic ones in Paris, go by without at least trying to strongly affirm some principles and somen ideas. The Italian-Iranian Hanieh Tarkian has already spoken out for this need in a recent article published by the Italian newspaper and webjournal Il Primato Nazionale [1]. An expert in Islamic Sciences, thanks to her studies at Jamiat az-Zahra, the most important center for women of Islamic studies in Iran, Ms. Tarkian shares with the readers her point of view on what tragically happened in France.

1) Allow me a first question, direct, even brutal: in which part of the noble Quran is it written that a Muslim can enter a sacred place of another religion and behead those who are praying there?

A) There is absolutely no verse of the noble Quran, nor a hadith, much less an Islamic norm (and I stress Islamic, not the false fatwas of takfiri heretics wearing the mask of Muslims), which allow a Muslim to enter a place sacred and beheading an innocent individual who is praying there. Moreover, these Takfiri terrorists have also done the same thing in the Middle East with Muslims, as Hezbollah secretary Sayyid Hassan Nasrallah reiterated in his speech on Friday 31 October, condemning what happened in Nice and stating that the terrorist actions, the destruction of churches and mosques offends and puts Islam and the Prophet in a bad light and has nothing to do with Islam, therefore they must not be associated with it.

2) So, in your opinion, how did we get to these levels of destructive madness?

A) Imam Ali was killed with a sword blow to the head while prostrating in a mosque by a self-styled Muslim, Imam Husayn was killed along with his companions by the army of an individual who considered himself to be caliph of the Muslims. Therefore, the history of takfirism and religious extremism dates back to the dawn of Islam, when these self-styled Muslims killed the successors of the Prophet to hold power over the Islamic community. Today the heirs of that takfiri terrorism are ideologically nourished by Saudi Wahhabism (I suggest to deepen the history of Wahhabism, it is interesting that it was favoured by British colonialism) and economically by Western governments and their allies in the Middle East. Always with the same keep peoples under control and today especially to create internal conflicts so that, while they are busy fighting each other, [Western governments] can steal their natural resources, such as gas and oil. It is not possible to think that you can help terrorists, have Saudi Arabia as your main allies and then pose as fake fools when terrorist attacks take place in your country.

3) French President Emmanuel Macron has proudly claimed the "right to blasphemy" but precisely what right is Macron talking about?

A) Macron defends the freedom of expression that he considers the basis of the values ​​of the French secular Republic, but it is a pity that it seems that freedom of expression is evaluated through double standards, considering what happens if you criticize the policies of Israel, if you question some aspects of the Holocaust or if one criticizes gender theory or homosexualist initiatives. Even the Supreme Leader of Iran, Ayatollah Khamenei, emphasized this in his message to young French people a few days ago, because it is important that the paths of dialogue remain open and that we realize the double standards that apply in the West. Therefore, there is no true freedom of expression and Macron's is clearly a provocation, also because it is truly a strange "coincidence" that all this is happening at the time when Muslims celebrate the anniversary of the Prophet's birth. Then we remember that Charlie Hebdo also published blasphemous cartoons against Christianity, so Muslims and Christians should be united in condemning this false right to blasphemy.

4) Isn't the terrifying attack in Paris rather the result of the repeated tensions between Emanuel Macron's France and Recep Tayyip Erdoğan's Turkey, still seeking a geopolitical recognition that the West continues to deny him?

A) I believe Erdoğan is in particular seeking to gain leadership in the Islamic world, we know well that the Saudi Arabia-UAE bloc is competing with the Turkey-Qatar bloc for leadership over the Islamic world. Macron with these provocations that inflame the soul of Muslims is actually helping Erdoğan to achieve his goal, because most Muslims prefer him to Bin Salman and see him as a defender of Islam and this also thanks to the propaganda support that the international media gave the "moderate rebels" supported by the governments of Turkey and Qatar. So let's go back to the same discourse: you cannot pretend to fight terrorism in Europe and then support it in the Middle East to create internal conflicts and in the meantime steal the resources of the peoples. It is indisputably clear that their policy is against the peoples, both Middle Eastern and Western ones and it is no coincidence that it is globalist and mondialist France that supports terrorism.

5) Syrian President Assad had warned Western governments about the flirting with Islamic terrorism. Why has his warning, always tragically current, remained unheard?

A) The answer is very simple: because Western governments are okay with it and it is in their interests. As we have said, in the Middle East, support for terrorism creates conflicts between peoples and chaos and this justifies the presence of Western armies, like the American one, which steal people's resources, just think of the oil stolen in Iraq and Syria. General Soleimani in his speech said to the then president of the United States, Obama: "Mr. Obama! How many kilometers is the distance between Ayn al-Assad base - where your fighters are - and Ramadi? How is it possible that a country is threatened, killings are committed, you settle in that country with the excuse of supporting that country, you create a coalition, but do nothing? What do you call this? Isn't it being complicit in the plot? Doesn't that mean you are part of the plot? Does that not mean that there is no will to fight against these takfiri and terrorist groups? How is Isis financed? Through the oil wells of Karkuk and Deir ez-Zor in Syria! Where is the oil exported to? All this oil cannot be transported with a tanker or with 20-liter containers! The tankers carry it, not one, but dozens. Where do they transport it from? Do they carry it from underground? Or not, do they transport it on the ground and through these countries allies of your international anti-Isis Coalition?".

6) Matteo Salvini, the strong man of the Northern League, in his tweet on the Paris attack called Iran "a rogue State" [2]. Yet Iran has done its utmost and continues to do its utmost to defend Christians in Syria. In your opinion, why does Salvini follow this course of action?

A) Salvini knows very well what the situation is in the Middle East, no one can justify him by stating that he is ignorant, always assuming that this can be a justification, considering the role he plays. Some friends close to the League report that unfortunately within the movement the pro-Atlantic and pro-Zionist position prevailed over the pro-Russian one, so it is likely that Salvini will act and affirm what it seems to him that at the moment it makes him achieve more consensus in the universe of strong powers.