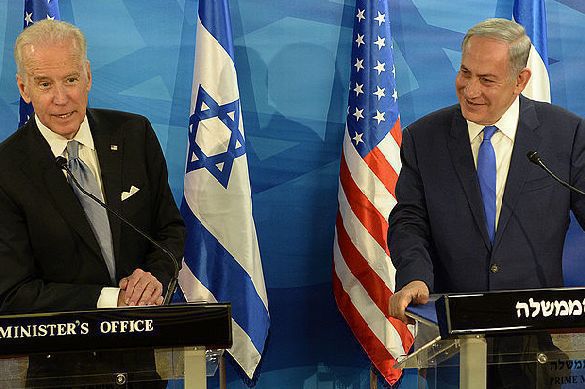 Now that America's 2020 horse race is on to decide who will be its top dog, as in Commander-in-Chief, this November, Democrats seem to think their top gun, Joe is in the lead; in total control after his veep pick, Kamala Harris. Let me be clear. Nothing is further from the truth. That Democrat duo will not win come November. Not on a straight ballot count. Won't happen.

For starters, it is not a horse race, so to speak. Incumbent, President Donald is a thoroughbred. He comes with a fine pedigree at that, I should add. His opponent, Joe Biden, is not of the same species caliber. Not even close. That is because Joe is a real donkey. Take his head for example. It is a composite of Crisp White Strips, Maybelline-why-can't-you-be-true lip floss, and of course, crowned with so many rogainesque hair plugs, that his noggin always glows, even in daylight.

His partner in crime, Kamala Harris, is saddled with similar dead weights. She even went so far as to get her sagging face lifted; nip n tuck those protruding extra chins. The result: Not good. No way pretty. As Joe is wont to say, "You aint black". He is right. She aint even brown... enough. That is precisely her, actually his problem. Her ancestry is East Indian, and some Jamaica maan. There is hardly an American demographic bar for that spurious cultural mix. Less than 1 percent.

Kamala should be disqualified

Compounding these problems, turns out, that Kamala, is not a natural born U.S. citizen. Fact is, neither were either of her parents. That basic truth should disqualify her from holding such a high office, right? Wrong! Enter the Kenyan Articles of defense. Maasai Barack Obama got by under even more strange circumstances. Besides, to point out that real deficiency would be tantamount to overt, okay, covert racism. Even to the stage of harassment. Let us leave at that.

Now, if by some strange twist of fate, turn of a friendly card, the Obiden/Harass Presentwitzy, were to happen - you know, stuff often happens - which is Dumb, and which is Dumber, you ask, well, it all depends. They are, those two, one and the same. Makes no difference. Because either one, in Air Force One driver's seat, will most certainly fly it the wrong direction. Consequently, many Americans will most likely crash and burn. Because of more endless Democrat wars and regime changes. Not good optics, if you look at the close-ups.

Which brings me to my point of larger contention. Unlike my esteemed colleague, and friend, Timi (Timothy Bancroft-Hinchey), I choose not to recuse myself. Sure, go ahead and accuse me of interfering in America's election; I've done it before in 2016. Call me pig-headed, whatever. Matters little to me. There is a bigger picture at stake. One with yuuge ramifications for the whole world.

President Donald Trump is the obvious choice. Had he not been so hamstrung in his first term by so many ankle biter Democrats and lying media types, chances are, Russia and America would not be at odds. There would be no compelling need for a reset of the already hackneyed to death reset button. President Trump understands the 'end game' regarding Russia's past present and future. Sure, the late senator John McCain described the Federation, as a 'giant gas station'. No denying that.

Yet, Russia will not remain that way; stuck in the mire. Nor will it be entirely dependent on exports of its natural resources forever. Resource extraction is the preliminary stage; a painful but necessary first step towards moving on up. However, Russia still rests near the bottom of a slippery, steep socioeconomic slope on every hill east of Moscow.

Keep in mind though, Russia's overarching goal is reconstruction, realignment of the economy. But that requires capital and productive resources. That is where President Trump's input is critical. He has already signaled his willingness to cooperate. With what you say? Well, try American ingenuity and knowhow in Russia's Siberia and Far East Regions. President Putin, as well, is attuned to the olive branch offered. He is more than willing to reach out; open to partnering with U.S. and other transnational firms to begin the makeover of Russia. With some luck, and much skilled diplomacy, this partnering could well bring, win-win dividends to all parties involved.

Moreover, President Trump, regarding the current dismal state of Ukraine, is proactive in that geopolitical sphere. Congress' many punitive sanction bills against many Russians remain stacked on his Oval Office desk. He refuses to sign those. His common sense dictates. Under any and all circumstances, no way will he interfere in an internal Ukrainian and Russian matter; unlike dumb Joe, who cannot discern right from wrong where stacks of money is involved. Right Hunter?

On a different note, there remain many pundits in American politics, who feel strongly that Tulski Gabbard should have been the Democrats candidate choice. Nuts to that. She is a novice. Her military experience was gleaned from behind a desk job in Iraq. Where, she learned, maybe, to count to five in Arabic. Not exactly Commander-in-Chief material.

As to Gabbard's choice for running mate, two twits come to mind: Beatle, skateboarding - bump that up to longhorn touting, seeing that 'Robert' is a native Texan - O'Rourke, or, Corey 'I am Spankapus' Booker. Either way, America loses bigly. One is messican with their minds. The other, is somewhat black. He is rich though. Maybe BLM would give him a pass.

In the end though, all of America would have to deal with, and endure, Dumb, and Dumber To. That is no joke. Neither is that prospect, however remote, real funny.