In defense of Maurizio Blondet and all the others

Where is Voltaire when needed? Where is the voice that proclaimed "you are saying nonsense but I would give my life so you can continue to do it"? Voltaire has been dead for centuries and his body is dust delivered to the eons. His teachings survive him only in the tradition that passes them on. Furthermore, the French philosopher never said the famous phrase, which was attributed to him by a historiographic mistake, which has by now become well rooted in the common feeling. 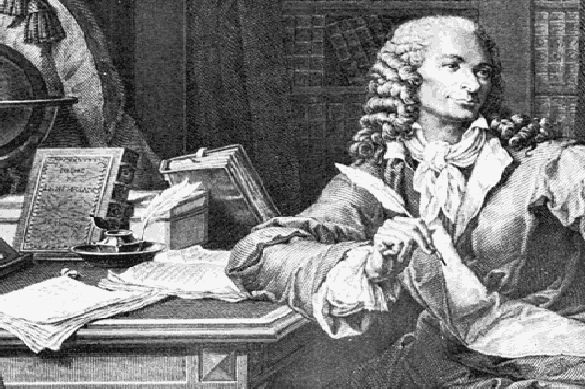 So why remember one of the fathers of the Enlightenment and with affectionate arrogance call him into question, almost a witness to these imperfect lines of mine?

Because here in Italy, democrats and progressives have always shown off their superior (in their opinion) moral stature by spitting in the face, to us all the others, precisely the phrase mistakenly attributed to Voltaire. To explain well, to all of us the others, how we did not understand what freedom of speech, democracy, tolerance for others' opinions and other ways of living were.

Italy in a storm

Because the situation in which Italy finds itself today is no longer just that of a ship without a helmsman in a great storm but that of something that despite being people (and therefore History, passions of flesh and blood) finds itself sinking into ever new depths of horror, in which those who dissent from the common clichés, heralded by the masters of the speech and defended by their mastiffs on the payroll, are increasingly placed on the index and silenced.

For the moment, there are still no formal laws that explicitly forbid saying or writing certain things but the air you breathe is becoming increasingly heavy and unbreathable. It is the air of a witch-hunt, typical of a system that sees in the alternative thinking an enemy to destroy and not the essential component of democracy.

Thus, one of the consequences of the Covid-19 epidemic is that some pushes have appeared that seemed unthinkable until a few months ago. They were clearly already present, but hidden under the seething surface of the collective feeling and unable to reveal themselves because they lack a specific catalyst. Something that would overflow the sea of cowardice in which the hearts of many Italians today drown and which will shape their collective unconscious. The fear of dying from the new respiratory virus, a fear also cultivated artfully by a certain type of journalism for reasons of pure audience, has prompted many of my compatriots to accept and share the idea of barricading themselves at home in obedience to the quarantine imposed by the Italian government. Many Americans acted differently in their country, even taking up arms to defend their right to leave the house in the midst of an epidemic, but in Italy it went differently.

Perennially satiated yet always hungry, weak males and neurotic females of our nutritional society have sometimes voluntarily turned into informers against those who violated the new rules.

Thus, those who went running because exhausted by the domestic confinement were reported on the fly by neighbors and fined immediately by the police. Semi-clandestine dinners between family and friends were interrupted by the sudden raid of armed policemen, called by zealous neighbors and diligent condos. There has been a generous use of drones to track down some lonely runners, never seen before when it came to finding other criminals, perhaps the same drug dealers who have been plaguing our squares for years and poisoning the lives of our sons and daughters. We have seen the use of mandatory psychiatric treatments against those who disobeyed to, or revealed behavior considered unusual according to, the new rules. Masses and religious celebrations were interrupted manu military even when the new hygiene rules decreed by the government were respected.

Indeed, we live truly incredible times. In the great epidemics of past centuries, the churches have always remained open, perhaps with the doors wide open, so that the faithful outside could hear the Word of God and draw from It comfort and hope. Instead, in these modern days, places of worship have been closed. Closed for viruses. Some priests, differently faithful to the Gospel, preferred to preach and forcefully celebrate in secret and, if openly, under the threat of police intervention. From the folds of a distant past it seemed to hover once again and equally sinister, the non licet esse christianos of centuries long gone. Not by the mouth of the officials of a hostile empire, but by that of obtuse bureaucrats of the Republic and, irony of an increasingly sad and unfortunate fate, of that of priests who no longer have a true faith in that God in whose name they still preach and ask for money.

Covid-19 simply showed the veil of hypocrisy in which many priests are still wrapped: perhaps one day God will open their eyes to the way they lived and preached their faith and then they will discover that they do not have enough tears to cry.

It is possible that in the future there will be new persecutions against Christians here in the West, where the modernist drift has been tormenting the Church for some time: one part is undoubtedly devoted to the teachings of the Gospel considered more true and profound, another seems destined to please the world (sic) with a "more modern and current" interpretation of the Scriptures.

The letter that Archbishop Carlo Maria Viganò recently wrote to American President Donald Trump tells us that to some priests is now painfully clear that the battle being fought is not only on a human level but supernatural one.

Perhaps a future awaits us where a rainbow-style Ned Flanders is the undisputed master of the world and imposes his hypocritical smile and his cowardly goodness on us, under penalty of losing our freedom and what is dearest to us?

There is a bill, for the time being still being examined by parliament, against alleged homophobic and discriminatory tendencies of Italian society towards the LGBT community (net of other letters of the alphabet). In addition to the penalties provided for possible convicts, some people wonder about the intrinsic nature of this law: if approved, it could make it impossible not only preach the Gospel and be faithful to it but also even talk about it. Or preach the Quran and just talk about it. Or read Dante. Or write about things that the new Power, the new System, would barely tolerate even when they are offered tamed.

The Covid-19 epidemic also offered the opportunity to create fake news verification committees (those of others, never their own); to present lists drawn up abroad in which the Italian sites appear declared as unreliable by a foreign; to delete from YouTube all those videos on the epidemic "opposite to our Community's Guidelines" including also the video by Sara Cunial who, as parliamentarian and in Parliament, said her opinion on the situation we live in, daring to criticize the management of the emergency and Bill Gates' ideas on vaccines.

If this mechanism were to take root and become practice of the State, enriched by other similar laws, the first to disappear would be Maurizio Blondet and his blog; Massimo Mazzucco and his site Luogo Comune; Claudio Messora and his web TV ByoBlu. Enrica Perucchietti and her critics books about the new wonders of the modern world would disappear; we could no longer listen to Silvana De Mari nor read her "Arduin the Renegade" or "My name is Joseph"; there would be no room for Danilo Quinto and his conversion on his personal way to Damascus. Diego Fusaro and his philosophy, which certainly includes fewer things than there are in heaven and on earth and not for this is less useful and precious, would be banned. Sara Cunial could no longer speak in Parliament about Bill Gates and tell the truths and the nonsenses that she has the right to utter as human being and elected representative (her, unlike others) of our people. Not even Ennio Remondino and his peaceful journalism nor Paolo Barnard and his serious journalistic investigations would listen anymore.

All of them and all those like them would find themselves too busy going off in some prison of the new society where it would be an offense to keep at home a copy of the Gospel that did not comply with the new directives. Or write a page that was not aligned with the dictates of some commission of control from some Ministry of Love or Truth.

The most visible and most easily hated would disappear first, hunted down as prey by a new political police, derided and mocked by professionals on a payroll, deprived of their freedom, money, driving license and passport, "treated" by State psychiatrists. In the end, thrown into a corner like the empty bags into which they would be transformed by the torture they suffered, before being killed by a Party assassin.

Those already dead would be saved and only in body, such as the late lamented Giulietto Chiesa to whom I was once approached because we were both on the same black list: I ennobled by a similar closeness, he debased by my company.

Fool who rub his hands to celebrate such a victory. Idiot, because he forget that such a system does not admit any criticism, not even by mistake. Nobody would be safe: today's favorites can become tomorrow's victims. In Orwell's 1984, in the cell of Winston Smith now a prisoner of the Party, the poet Ampleforth arrives. He believed to be safe from the Psychopolice. Ampleforth's crime had been that he had not erased the word "God" from a poem: an inevitable and apparently negligible error, a choice in accordance with the rules of poetic metrics. First Ampleforth, then Smith, will both end up in Room 101, delivered to their sad fate.

It is a scenario that has already occurred in the past, with different ways and instruments: in Nazi Germany with its Gestapo and its extermination camps; in Stalin's Russia with its gulags and psychiatric hospitals; in Pol Pot's Cambodia and its killing fields.

Those who think that a similar scenario cannot occur in Italy today, in a worse and more cruel form thanks to new technologies, are wrong. In fact, it is already coming true, but its steps are still uncertain and unstable. There is still time to stop it and preserve democracy, but time will end sooner or later.