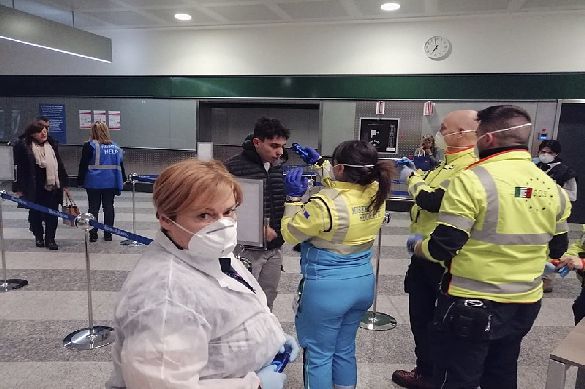 This article is inspired by some reflections that Paul Craig Roberts has recently shared with his readers [1]: a very infectious virus such the coronavirus can easily overwhelm the New York health system or the Italian national one. Can decreeing an extended quarantine over an entire country be the best way to contain the epidemic and avoid a backfire of the infection? At what price?

I do not know in detail the American situation preceding the first cases of coronavirus but I can say something about Italy.

All Italian governments in past years, regardless of their political color, have cut funding for the public health system, screaming at the top about efficiency, fighting waste and corruption, roaring of making the Italian health system better, more flexible but also more strong, capable of facing the challenges of the future.

An example of this optimization process (sic) were the words of the president of the Piedmont region, Sergio Chiamparino (Democratic Party), who in 2014 in an interview with the well-known Italian newspaper La Repubblica said: "... I think the reason for keeping open the structures should not be the keeping in office some bosses" [2].

Another example can be the Veneto Region of Luigi Zaia (Northern League) which in recent years lost the 40% of its hospitals' intensive care beds. So in the words of Mrs. Sara Cunial, once 5-Stars representative but now perhaps only disgusted, during her recent speech in the Italian Parliament [3]. The words of Mrs. Cunial should give rise to at least a reasonable doubt in the listener, certainly a doubt to be verified with a thousand attentions, but still to be taken into consideration. The reactions I see and the comments I read on the web, however, do not force me to believe that her words have had this effect on a sufficient number of people.

Given the results of these unfortunate days, one wonders how far-sighted have been those economies so desired and flagged by all Italian politicians, in every region of our country.

Eliminating beds first, entire departments after and finally the whole hospital does not mean saving money on the job of some boss (which is not fired as not-fireble Italian public employee) but rather depriving yourself of a huge wealth of scientific, medical and human experience. A wealth that could have been available in an emergency. For example, during an epidemic caused by a very contagious virus, when so many sick people arrive in the hospital that you no longer know where to put them.

The Italian case, however, is peculiar under some other aspects, which are not only merely economic and logistical ones.

The Italian government of our Prime Minister Giuseppe Conte moved with some delay in declaring the first quarantine measures, which entered into force only on the last 23 February and not all over Italy [4]. Why? Basically, for two reasons.

Since January, Matteo Salvini, the strong man (sic [5]) of the Northern League, proposed a partial quarantine and health checks at the borders, especially from China, when the situation in the former Celestial Empire was showing its whole drama. This reasonable proposal, of pure passive defense, was received by the Left in office with its usual Pavlovian reaction: Salvini was racist, fascist, white supremacist, rough. It was therefore ignored amid the laughter of the national Gauche caviar.

How to forgive or forget now Nicola Zingaretti, when as secretary of the Italian Democratic Party (the former communists ...) moved happily from Rome to Milan [6] to enjoy in a public aperitif against racism? As racists were those who, like Salvini, asked for health checks at the airports ... Ironically, Mr. Zingaretti fell ill with coronavirus a few days after his public aperitif, anyway surviving the disease.

The second reason was the absence between virologists and infectious disease specialists of a common vision on what to do. Unfortunately, some of these experts have shown and still show now mostly the traits of rock stars than those of professional and capable scientists.

It is superfluous to remember how far-sighted Russia was deciding immediately to close the borders with China and imposing medical checks at the airports. This did not stop the virus from spreading in the country, but slowed it down and gave to doctors the most important thing: time. The time that we tragically missed here in Italy. Official statistics from the Russian government indicate that the decision was wise and Russia has many infected citizens in recent days but very few deaths, generally people with previous diseases (which, among other things, strongly proposes the problem if the coronavirus is the only or rather a contributing cause of death).

Eventually the epidemic in Italy exploded in all its tragedy, causing an impressive number of deaths, especially in the North and in particular in the areas of Brescia and Bergamo where it seemed to witness the effects of a biblical scourge. The government quickly panicked due to increasingly alarming reports (and, perhaps, also because of an all too much feminine inclination of the soul of some of its male components) and then imposed a draconian quarantine which is still in place with all its ups and downs.

However, the stupidity of the government and the political majority that supports it in Parliament was contrasted by the sense of duty and the spirit of sacrifice of those who found themselves on the front line taking care of the sick. In fact, we will never be able to thank enough doctors and nurses who went out of their way to care those unfortunate victims, often helplessly witnessing their death but exposing themselves to the danger of contagion. We will never be grateful enough to all of them, who have earning as medals of valor the signs of exhaustion and dismay, the skin of the face striped by the facial masks worn for too many hours. Doctors and nurses, all of them remained in their places, aware of the responsibilities that weighed on them: for them, there were no big or small things but only the duty.

I have no hesitation telling you that I consider them as angels of God among us [7], sent by Him to the rescue of His children in danger, just when, on the other hand, ran away an institution once venerable and today represented by an Argentine dressed in white, obsequious to the decisions of a government of cowards: close sacred places, cease liturgical ceremonies, discourage the first and most immediate link between those in danger and the only One who can actually save them, forgetting that Francis was and is, first and foremost, the name of a saint who embraced lepers.

The exhausting but continuous commitment of doctors and nurses has therefore become the unheeded call to duty that the Church of Bergoglio is no longer even able to imagine, committed as it is to please the World. On a more earthly level, this superhuman commitment is what makes even more hateful and impossible to forgive the foolish lightness of the Italian Democratic Party and its leaders, committed to participating in aperitifs and antiracist dinners when the opposition politicians, in time, wisely asked for more caution.

The spread of the infection saw in a flash a creepy peak in the areas of Brescia and Bergamo. Why? It has been said that the two areas are home to the most important industrial districts of Italy and that therefore the virus has spread rapidly because people always move in and out, greatly facilitating the infection. It may be, but there are other industrial districts in Italy, not so far from those two cities and peaks similar to those of Brescia and Bergamo have not been seen. Micro dust pollution? The virus could certainly be conveyed by micro dust released by industrial plants (like all viruses, probably) but, in general, all the cities of Northern Italy suffer this type of pollution and therefore the contagion should have been fatally almost homogeneous. In the South, also Taranto experiences this condition, due to the mega steel plant that for decades has offered the population the captivating choice between starving or cancer. Yet in Taranto (as in all of Southern Italy) there have not been so many coronavirus deaths to panic the entire country. So?

Why not at least glance at those two massive vaccination campaigns against flu and meningitis that were carried out, one after the other, right in Brescia and Bergamo before Christmas 2019?

No, dear naive readers: there is a vaccine religion that has in some doctors by mistake the high priests that are much less inclined to forget their divinities than certain men dressed in white. Even the mere possibility of a scientific research to clarify is enough to take the sleep away from the board of directors of some pharmaceutical company specializing in vaccines.

Here it would no longer be a matter of some poor child devastated by the adverse reaction to a useless vaccine but of tens of thousands of Italian deaths and an unknown number of billions of euros in damages. It is easier and more convenient, then, to propose a vaccine (!) against the circulating coronavirus, perhaps experimenting it on a fee-paying human "volunteer". Bill "mini Malthus" Gates will take care of convincing you, complete with a subcutaneous microchip [8].

Going back to the good Roberts and the questions he rightly asks, we must also understand that the Americans... are not really in quarantine.

We Italians are in quarantine and it is like being in prison.

For two months, we have left our homes only to go to work (and not all of us) or to buy some "useful food": supermarkets in fact no longer sell socks and underpants (for example) because they could entice citizens to go out more often (sic). Taking two bottles of wine instead of just one can get you a fine at the discretion of the police officer who stops you. Spy drones are used to control citizens, never seen before even against drug dealers who regularly bulling in our squares. We have constantly flying helicopters at 8000 euros per hour to discourage families who eat in perfect solitude on the roof terrace of their home. Three police patrols (6 armed men!) may suddenly appear against an old man sitting on a bench, away from everyone, alone, out of his home because he is exhausted by the domestic confinement. We are forced to wear face masks when we move, when we are at work, when we have to talk to someone live.

The others are no longer simply Italians like us but the enemy that can infect us, perhaps kill us. Fear dominates us, it impregnates us with its essence like a poisonous sweat. Fear affects us, making us not men strong and free but rats crouched at the bottom of their lair.

This fear is the best ally of the government of imbeciles who holds the destiny of our country in these days. For this reason, I envy Michigan [9] and its anti-lockdown militiamen: they are the honorable fruit of Benjamin Franklin's words "those who would give up essential liberty to purchase a little temporary safety deserve neither liberty nor safety".

So to clearly answer one of the initial questions, yes: it's time to leave our houses. It is time to be men, not rats.

[7] Alessia and many other, angels of God among us: