The new art of war

Translating into Italian the work of the Russian political scientist Leonid Savin Couching & conflicts was for me an experience that aroused mixed emotions. If on the one hand, in fact, you must necessarily face similar works to enrich the baggage of your knowledge and ability to understand the world around us, on the other hand, you exposes yourself to the risk, far from being merely potential, of the disenchantment in finding yourself deceived by those you trusted: this is what happened to me, when the miserable events of Italian politics mixed in August 2019 with my efforts to translate the chapter dedicated to the Ukrainian Maidan. 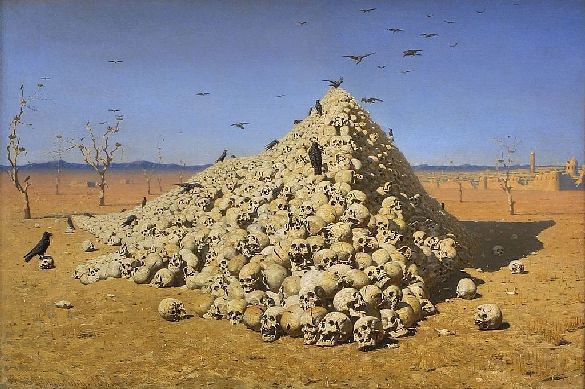 Couching & conflicts deals with the theory concerning the "new art of war", which is also the title of the Italian edition [1]: not only information and disinformation as they are generally understood but also, among other things, the set of methods by which a country can be affected economically and socially through the manipulation of its economy on international markets, so as to favor a change of government (or "regime", just to use a word that makes so much bad anti-demokrats...). From these manipulations to the sadly known colored revolutions, perhaps followed by an external military intervention, the step may not be really immediate but still remains tragic: Libya docet, the Latins would say, and so also Syria even if right against the lions of Damascus the mechanism has jammed, showing its inevitable limits.

Reading and translating Savin's book I got the idea that the great puppeteers of our time, the United States of America dully stuck in their illusion of still living in an exquisitely unipolar world, succeeded in the crazy and visionary task to turn the generic ideas about war of Sun Tzu into a field operating manual. The world of Sun Tzu is two-dimensional, as are all agricultural and technological ones: in it, there is no Air Force that can be deployed against the enemy nor are possible any reconnaissance in the skies of an enemy country to gather valuable information or disturb its communications. In such a world, there are not even computers, Internet and computer networks that have allowed the diffusion of a different type of networks, the social ones, which today find wide application in the context we are talking about.

Sun Tzu believed that the best warrior is the one who wins a battle without having to fight it for real. But this belief, which today has become so well established in certain cirlces that it even generated concepts such as that of neocortical warfare, came from a person who had still fought with the sword in his hand and therefore knew the war not only by hearsay but also in the stench of spilled blood, in mutilations and infected wounds, in cries of anger and despair, in men who get dirty by fear and terror.

Sun Tzu tried to win without going to the open fight but did not refuse the need to wield weapons and place himself at the head of an army.

The Americans who, to bring down governments that they dislike because they do not obey their wishes, make a casual use of some social theories (gender and identity policies) and some war practices (the use of Islamic militants soaked in hatred religious as infantry that can be sacrificed on the ground) inevitably end up paying the price for their wicked choices when their society and the whole West increasingly show signs of an evident moral, human and material decline, which suggests more a Sodom and Gomorrah type end than a bright future of peace and prosperity.

I can only share Savin's wish that his book could be a "toolbox" for all those who really want to understand the changes of our time and maybe equip themselves with those useful tools not only to resist but also to reverse the destructive process or at least soothe it in part.

It was therefore a pleasure to find in the small but brave publishing house Idrovolanti Edizioni [2] and in its accountable for publishing, Daniele Dell'Orco, a sensitive shore to these hopes: what follows is my brief interview with Dell'Orco both on nature of Idrovolante Edizioni both on the reason that allowed the publication of the Italian edition [3] of Savin's book. Inevitably, Italy is also mentioned.

Q) Why a publishing house like Idrovolante Edizioni? Are you targeting any specific audience?

A) The name refers to a historical era, that of the first half of the twentieth century, in which Italy was at the forefront in the world in the development of aeronautical technologies but above all produced an unprecedented quantity of pilots and adventurers during the course of the history. Many of them, defying logic, risked their life (and in many cases lost it) for the sole purpose of experiencing uncommon emotions and making fun of the laws of gravity. The seaplanes built in Italy, commanded by the great Italian flyers, became known all over the world and gave our country a prestige probably without equal. And in the contemporary slumber, today's Italians are not aware of how exhilarating the idea that their grandparents and great-grandparents were basically ante litteram astronauts. In line with the name and its mission, first ethical and then editorial, Idrovolante Edizioni is aimed at those who consider themselves the custodians of the legacy of those characters who made us great, or simply to those who consider immaterial and solidity of spirit as a vocation.

Q) Why did you want to publish Leonid Savin's essay?

A) Geopolitics is a macro area that in Italy is perceived as far from the needs of people's daily lives. In reality it is the battlefield, diplomatic but sometimes also practical, in which many of the fates of the "common man" are decided without his being aware of it. Leonid Savin, a fine geopolitical analyst from a world that is in many ways obscure and demonized, such as the Russian one, offers ideas for a better understanding of many of those 2.0 conflicts taking place all over the world.

Q) Looking at Italy, do you think that the events that happened in our country in recent years are to be placed in an area of ​​"colored revolution"? If so, cui prodest?

A) Talking about a colored revolution would presuppose a movement destined to subvert an order of an often authoritarian nature. This is not the case with Italy, a country in which, however, popular sentiment has never translated into a movement in the streets and indeed has not even managed to translate into government representation. The experience of the yellow-green government, in fact, has failed and also in a hurry precisely because of the many "compromises" with the power that two parties such as the Northern League and the 5Stars Movement, already difficult to combine each other, found themselves forced to do by subverting in their populist narrative. It is no coincidence that the M5S is rapidly losing consensus while remaining in government and therefore still finding itself forced to change its connotations, while the League is managing to assert itself according to the opposition.

Q) What does it mean to be sovereign in Italy today and where is it possible to find a political response to sovereign requests and demands?

A) The concept of sovereignty is a re-edition in a contemporary key of patriotism, which in turn is used to sweeten the erroneously negative heritage that is hidden in the word nationalism. In reality, if from a philosophical-political point of view, sovereignism can take on meaning due to the transfer of sovereignty to which Italy has met with its entry into the European Union and the adoption of the Euro, from the point of view of politological view is related to a malpractice typical of our country where political class, or rather a part of the political class, is elected by the Italian people, swears on the Italian Constitution, occupies the chairs of the Italian institutions but politically acts against the needs and lacks of the Italian people. If in fact the sovereign demands, starting from the use of the term, are typical of the right-wing parties, almost everywhere at European and world level tend to adopt political measures functional to the well-being of their own people, including social democratic, liberal and progressive forces. The examples that come to my mind are those of Merkel and Macron, moderate and pro-European in theory but ultra-nationalist in practice, or even Trump himself, often considered an example of a sovereign leader but capable of adopting less nationalist and more "workfare" political measures of the Democrat Obama.

Q) What is "Nazione Futura" [Future Country] and why should it be part of your political project?

A) Nazione Futura is a cultural and metapolitical container, it does not have a political character of its own and therefore does not provide for a "political project". It is a reference "for" politics, if anything. From the point of view of cultural, social and metapolitical promotion, it is present in over 40 Italian cities and organizes national and international events and initiatives, placing politicians, intellectuals, conservative-oriented professionals and local connotations around a table, going sometimes to replace and sometimes to support the work of traditional parties. The added value of Nazione Futura is that it connotes itself as a reference in the typical debates of the political agenda without having a party-like logic and without being an integral part of a party. It therefore makes use of a priceless faculty, namely that of being able to speak with anyone, support the right demands of anyone, and freely confront anyone.

Q) How do you see the future of our country in the medium and long term?

A) Our country is experiencing a moment of strong political, economic and anthropological decline. Something that we could define as cyclical, which throughout history has affected more or less vehemently all societies. However, the responses that came from politics are insufficient, and indeed they have accelerated this process and in some cases even gone along with it. Despite the difficulties that come from afar, politics would have, or should have, the tools to be able to manage the moment with courageous and forward-looking choices, perhaps even unpopular, but which in the medium-long term may prove useful to the country and even bring it to a position of strength. I give an example: the economic and financial condition of a country is the first instrument of sovereignty. Without economic stability, which must be created by politics, a State ends up at the mercy of others. Is there a public debt management problem? The answers must come from politics. Is there a problem of European constraints? Politics re-discuss them. Is there an employment problem? Politics studies adequate solutions to stimulate free initiative instead of proposing welfare choices and continue to harass VAT numbers. Politics can and must rediscover this role, otherwise it would be worthwhile to elect a bankruptcy trustee as prime minister.