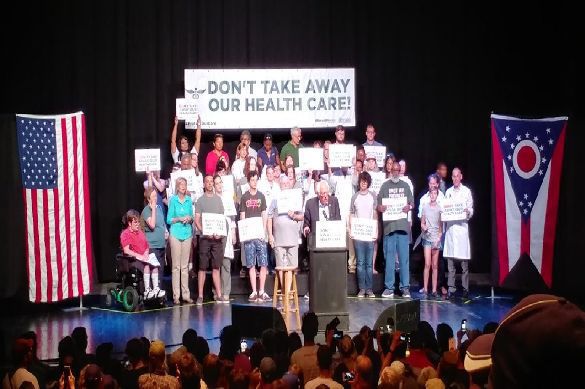 Follow what politicians do, not what they say they'll do. Time and again, rhetoric and actions are world's apart.

Obama and Trump are Exhibits A and B, their pledges to voters as presidential candidates polar opposite their policies in office on vital issues mattering most to most people.

Sanders responded to questions posed by the NYT on geopolitical issues as follows:

On using force, he claimed his first priority is to protect the American people, ignoring what's most important on this issue.

The US faced no enemies throughout the post-WW II era, only invented ones, independent states threatening no one, attacked for refusing to subordinate their sovereignty to US interests.

As president, Sanders said he'd use force. Claiming he'd only go this far as a last resort echoed what his belligerent predecessors said.

His response shows Washington's rage for global dominance would be in safe hands with him as president and commander-in-chief of the nation's armed forces.

Saying if military force is necessary, he'll seek congressional authorization and decide whether the benefits outweigh the costs and risks is code language for supporting endless wars of aggression against invented enemies.

According to the UN Charter and other international laws, military force is illegal and unjustifiable except in self-defense if attacked.

Yet Sanders said he'd use it for humanitarian intervention, code language as well for preemptive war.

He would consider military force

He'd consider military force against Iran or North Korea to preempt a nuclear or missile test.

Fact: Nothing in international law prohibits nations from developing and testing ballistic, cruise or other missiles.

Dozens of countries have these weapons. Preemptively attacking nations with these capabilities would be naked aggression, a longstanding US specialty, Sanders apparently willing to continue it as president.

Iran's legitimate nuclear program has no military component - confirmed repeatedly by the IAEA and US intelligence community in its annual assessment of global threats.

Yet Sanders would consider military force against Iran and North Korea, two nations threatening no others, their history bearing testimony to their support for peace, stability, and wanting cooperative relations with other countries, wanting confrontation avoided.

Sanders opposes use of military force for regime change. He's against non-military actions for the same purpose.

He opposes war with Iran. Expressing support for the JCPOA nuclear deal, he'd reinstitute it with no new preconditions.

At the same time, he supports illegal curbs on Iranian missiles and falsely accused its ruling authorities of supporting terrorist groups and human rights violations - longstanding US specialties, not how Tehran operates.

While unacceptably hostile toward North Korea, he supports engaging with Kim Jong-un diplomatically.

Against new sanctions on the country, he'd lift some in return for a freeze on its fissile material development.

None are justifiable against the nonbelligerent state, its nuclear and ballistic missile development solely for self-defense because of a genuine fear of preemptive US war.

What happened before can happen again. Sanders is no peacenik.

He supports continuity on the Korean peninsula, maintaining thousands of hostile US troops in its divided south - despite no threat from the DPRK, China or Russia.

He supports a denuclearized Korean peninsula. Global denuclearization is key, eliminating these weapons in all countries before they eliminate us  - the US, other NATO, and Israeli arsenals most worrisome.

It is declared that all actions by Israel with respect to the city have "no legal validity."

He called the right of diaspora Palestinians to return to their homeland that's guaranteed under international law a negotiable issue as part of a peace agreement - ignoring its unattainability for over half a century.

He supports an illusory Palestinian state within pre-1967 borders, except for (illegal) settlements he'll do nothing to contest that exist on most valued West Bank land, preventing a contiguous Palestinian state, only an unacceptable cantonized one.

On issues relating to Palestinians and Israel, the US was never independent, always one-sidedly supporting the Jewish state.

Yet Sanders claims US leadership is "desperately" needed in future Israeli/Palestinian talks - polar opposite reality.

He's militantly hostile to Russia, China, Syria, Venezuela, and other sovereign states on the US target list for regime change.

Like candidate Obama, Sanders vowed to withdraw US forces from Afghanistan "as expeditiously as possible."

"I will promise you this, that if we have not gotten our troops out (of Afghanistan) by the time I am president, it is the first thing I will do."

"I will get our troops home. We will bring an end to this war. You can take that to the bank."

And he'll end indefinite detentions without charges. And he'll treat illicit drug use as a public health problem.

And he'll guarantee all children and youths a proper education.

And you can keep your doctor. And he'll guarantee Americans a public health insurance option.

And he'll "creat(e) an unprecedented level of openness in government."

And he'll be a uniter, not a divider.

And he'll put Americans back to work with unemployment higher at end of his tenure than when he took office.

And he'll ensure responsible immigration reform within a year of taking office.

And he'll "adhere to the Geneva Conventions." And "no more illegal wiretapping of American citizens."

And he won't unilaterally authorize military attacks in situations "not involv(ing) stopping an actual or imminent threat to the nation."

"(T)he days of compromising our values are over," he pledged.

He breached all of the above and more, serving privileged interests exclusively, force-feeding austerity on ordinary Americans, waging endless wars in multiple theaters, exceeding the worst of Bush/Cheney.

By his voting record, rhetoric and body language, Sanders is an Obama clone, a longstanding con man never to be trusted.

Time and again betraying the public trust, his presidency would likely assure continuity on issues mattering most.

The same goes for any future US president as long as Washington's domestic and geopolitical agendas remain unchanged under one-party rule with two extremist right wings.