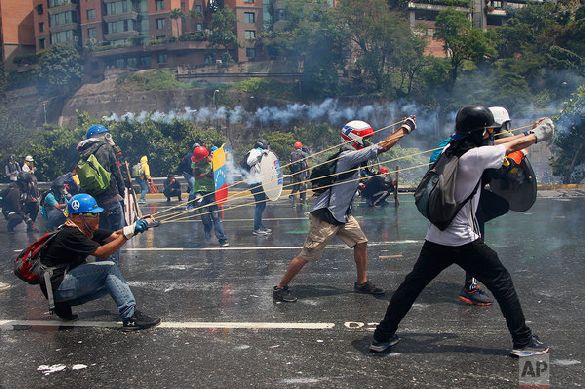 During a Wednesday White House meeting, Trump reportedly told political nobody/US designated Venezuelan puppet Guaido that his regime plans stepped up efforts to eliminate its social democracy in the weeks ahead.

Guaido reviled by most Venezuelans

Reviled by most Venezuelans, Guaido's own party members defrocked him for corruption related charges, replacing him as National Assembly speaker.

Over a year after he illegally self-declared himself Venezuelan president, voted for by no one, his status is weaker than ever, his fate likely to be eventual arrest, prosecution, and imprisonment for treason - or self-exile with foreign help to avoid a day of reckoning.

On Friday, Russia's Sergey Lavrov met with his Venezuelan counterpart Jorge Arreaza and President Maduro in Caracas, saying the following:

"The crisis in Venezuela is a result of attempts to launch a large-scale campaign (by the US) aimed at ousting the legitimate government with use of all options, as organizers of this campaign say, including use of force."

"We consider such scenarios (and illegal sanctions) completely unacceptable."

"We have firmly emphasized our adherence to respecting Venezuela's sovereignty, our solidarity with the Venezuelan leadership and the Venezuelan people in their struggle against an illegal pressure by the United States and its accomplices."

"We expect you to have a common approach to approval of new members of the National Election Council and preparation for elections to the National Assembly in 2020."

"I am sure that these elections are the only opportunity for radicals not to deprive themselves of any future in Venezuelan politics."

Separately he expressed "appreciation for the invitation to visit Venezuela," adding:

"We have very close relations at all levels. Our presidents meet regularly."

"The last time they met was in Moscow in October 2019, where very important decisions were made to further develop our partnership."

"New approaches and mechanisms for our cooperation were agreed upon that were designed to protect economic relations between Russia and Venezuela from the illegal interference of the United States, which attempts to dictate its terms to other states and spread its legislation extraterritorially."

Maduro stressed that in Venezuela, "the president is not appointed by the US president," democratic elections held for this purpose - the real thing, polar opposite the farcical/money-controlled US process.

The Trump regime is waging economic terrorism on Venezuela, Cuba, Nicaragua, North Korea, Iran, and other countries - the world community and UN secretary general doing nothing to denounce its lawlessness.

Russia supports the sovereign independence and territorial integrity of these countries, opposing US sanctions war.

In May, a Russian/Venezuelan commission on trade and economic cooperation with convene.

As in the past since established, the Bolivarian Republic "will follow the path of democracy and peace."

Trump regime hardliners are hellbent to transform Venezuela into a US vassal state - notably wanting its social democracy eliminated and control gained over its vast oil reserves, the world's largest.

US war by other means rages on the country, as well as on DC Embassy Protection Collective members Kevin Zeese, Margaret Flowers, Adrienne Pine and David Paul who put their bodies on the line to try preventing its lawless takeover by Trump regime henchmen.

Forcefully seized and arrested, they'll be tried in federal court, beginning on February 11, falsely charged with "interfering with the protective functions of the US Department of State."

If convicted in kangaroo court proceedings which is highly likely, they face stiff fines and imprisonment up to a year - for heroic actions deserving high praise.

He removed two Collective lawyers for phony reasons and denied the defense the fundamental right of pre-trial discovery that's required in all judicial proceedings.

The purpose of discovery is to assure judicial fairness, or at least greater fairness than otherwise possible.

Prosecutors are required to provide defendants will all relevant evidence enabling a proper defense - illegally denied to Collective defendants.

Howell also limited how they can defend themselves, wanting jurors denied crucial evidence to their defense.

It states that "(t)he premises of the mission shall be inviolable. The agents of the receiving State may not enter them, except with the consent of the head of the mission."

"The premises of the mission, their furnishings and other property thereon and the means of transport of the mission shall be immune from search, requisition, attachment or execution."

"The person of a diplomatic agent shall be inviolable. He shall not be liable to any form of arrest or detention."

"The receiving State shall treat him with due respect and shall take all appropriate steps to prevent any attack on his person, freedom or dignity."

The Trump regime violated all of the above, but Howell excluded this information from being explained to jurors.

For him, they're automatically guilty by accusation, convictions virtually certain, how all police states operate.

That's the deplorable state of today's America, a fascist police state masquerading as democratic - eroding freedoms on the chopping block for elimination altogether.