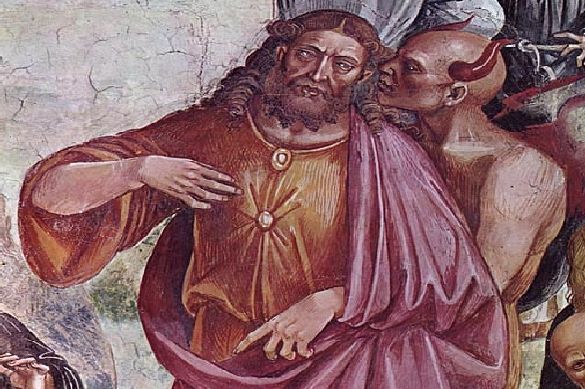 Just a few days ago, the world celebrated the beginning of a New Year, and already there are serious doubts about whether the world will still be here to see the end of it.

As I've argued in several previous Pravda.Report articles, as I've gotten older, I've become convinced that most struggles and conflicts in the world are not based on "good vs. evil," but instead between evils that most people are willing to accept and evils they are not.  This is why many so-called "leaders," despite being the vilest types of human beings, are accepted, and even deified, by millions, and in some cases, billions of people.

One of these institutions is religion.  It is exceedingly powerful, because people who speak out against it are often accused of being hostile to the individuals and concepts that created a particular faith.

But, realistically speaking, over time it has become evident that much of this defensiveness comes from the fact that religion has become "big business," and that many people and institutions, both honorable and unscrupulous, have found it a convenient way to not only make lucrative livings, but also to cajole and control the hearts and minds of others.

At this point you might be asking what this has to do with Donald J. Trump being the anti-Christ.  For the answer, I give you:

Reason Number One:  Donald J. Trump has become a false God to the pseudo-Christian movement.

America's corporate-controlled media often refer to this movement as "right-wing Christianity."  However, when looking at despicable human beings like Mike Pence, who unabashedly ignore Trump's racism, mendacity, misogyny, narcissism, adultery, and delusions of being "chosen by God," Christian is not the first word that comes to mind.  The mere fact that so many people who profess to be Christians can so openly ignore, and even embrace, Trump's evils clearly portend a person who can manipulate the hearts and minds of people to serve his own ends.

Reason Number Two:  An anti-Christ will exploit patriotism to lead nations into unjust wars for self-serving political and/or financial gain.

It would seem, having been lied to about the Gulf of Tonkin incident, which led to the escalation of American involvement in Vietnam; having seen George H.W. Bush use the invasion of Panama to divert attention from his political cronies who illegally enriched themselves during the Savings and Loan debacle; having seen his son George W. Bush lying about "weapons of mass destruction" in order to invade Iraq so he could award his political cronies oil leases and lucrative "rebuilding" contracts, Americans should be wary of politicians rushing to war.

But, as I've also argued in previous Pravda.Report articles, if there is one factor that will contribute to Armageddon, it is humankind's obsequious myopia.  Politicians know, especially around election time or in times of political crisis, that whipping up the drums of war and the blind patriotism that incessantly accompanies it, often serve as a diversion from political criminality and/or a pathway to reelection.

So, when I stated in my article Nancy Pelosi: America's Neville Chamberlain (Pravda.Report, October 16, 2019) that "America will once again be engulfed in a war manufactured by draft dodgers and based on lies," I was not exaggerating.  At the time I wrote this article, I already had concerns that Trump would steal a page from the "Bush/Cheney playbook" to improve his reelection chances.  And now, with an impeachment trial in the Senate looming and an election coming later this year, starting a war would certainly be within the realm of Trump's desire to retain, and enhance, his increasingly autocratic grip on the reins of power.

Reason Number Three:  Jesus's life was one of courage and selfless sacrifice.  Trump's life is one of cowardice and selfish greed.

Two words prove the veracity of this reason- "bone spurs."

I have often found it disturbing how many politicians, like George W. Bush and Donald J. Trump, are more than willing to show their alleged "toughness" and "resolve," as long as somebody else is doing the fighting and the dying.  After all, Bush sure didn't seem so tough when he performed some still nebulous "National Guard" duties to avoid serving in Vietnam, nor did Trump, when he avoided this same war thanks to the aforementioned (and some say fictitious) "bone spurs."

Trump, and his followers in the pseudo-Christian movement, are more than eager to trumpet how he was "chosen by God" to lead America.  What could be more dangerous to the world during this time in history than a willingness to beatify an unhinged demagogue with a messianic complex exhibited not by a willingness to sacrifice himself for the good of others, but by a soulless eagerness to sacrifice the lives of others to fuel his, and his followers, delusions?

Reason Number Five:  Jesus was compassionate and brought out the goodness in average men and women.  Trump epitomizes cruelty and brings out their evil.

Most Christians know that, before meeting Jesus, the Apostles were ordinary men.  One of the reasons His story has endured for over two thousand years is because He brought out their greatness.

Jesus also felt no discomfort interacting with people that many in His time viewed as the "dregs of society," giving them hope, comfort, and, in some cases, healing.

He also stated that it was easier for a "camel to go through the eye of a needle than for a rich man to enter into the kingdom of God."

Many argue, and I agree, that this passage is not so much a condemnation of wealth as it is an acknowledgment of what such wealth routinely does to the souls of those who possess it, often turning them into greedy, heartless, and venal people so callous about human exploitation and suffering that even their alleged acts of "charity" are driven by the egotistic desire for fawning adulation and/or financial gain.

Trump, on the other hand, has demonstrated a disturbing ability to not only darken the hearts and minds of a people and a nation, but also to bring out, and prey upon, the worst in humanity for his own nefarious ends.

And his views about the less fortunate in society became glaringly clear by his desire to deny food stamps to millions of needy Americans, while ensuring that the richest one percent, many of whom are, like him, the products of inherited wealth, continue to get richer.

Many of Trump's supporters, in order to pretend they have not been seduced by his evil, cynically like to claim that they support his economic policies, but not his social views. Yet this is like arguing that eating the meat of a poisonous meal is different than eating the vegetables, when, either way, the results are equally as fatal.

While I obviously don't know what was in Jesus's mind when He castigated the religious charlatans of His day, I can't help but believe that some of it may have been motivated by the speed in which these hypocrites hid behind "God" to divert attention from their mendacity, greed, and corruption.

America's pseudo-Christian movement routinely uses this same technique, claiming that critics are being hostile to God whenever their lavish lifestyles or self-serving machinations of the Christian faith are scrutinized or questioned.  And the mere fact that they deify a man like Trump openly attests to their hypocrisy.

Naturally, this list could go on, but I believe you get the idea.  While I realize that some of the religious arguments made in this article open me up to criticisms about interpretation of scripture or similar sentiments, if you give such criticisms from your own minds and spirits, and are not directed to do so by some individual claiming to speak for God, then you are exercising the greatest gift God gave you-the ability to think for yourself.

And, if you are thinking for yourself, I leave you one final thought.  Many in the Christian community have contended that the anti-Christ will be known to them, because he will divert people away from God and focus solely on worldly things.

But what if the anti-Christ is aware of this, and instead decides to "embrace" the religious community so its members will be oblivious to the fact that, instead of being bulwarks against evil, they have become facilitators of it?