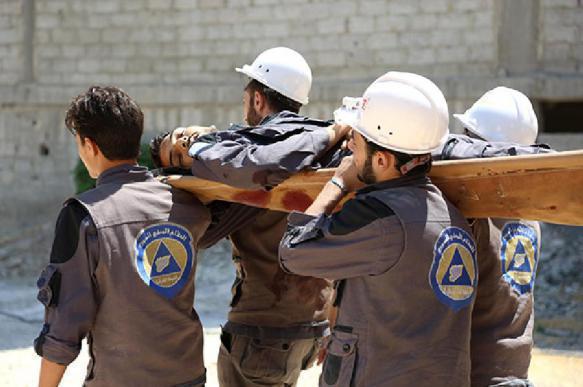 It published email information from an OPCW whistleblower, a member of its fact finding mission to Douma, expressing "his gravest concern over intentional bias introduced to a redacted version of the report he co-authored."

The Organization for the Prohibition of Chemical Weapons (OPCW) operates as a pro-Western imperial tool.

It serves US/NATO interests - polar opposite its mandated obligations "to achieve...a world...free of" chemical weapons.

The organization lost its legitimacy. It should be disbanded and replaced by independent chemical watchdog groups - beholden solely to upholding Chemical Weapons Convention provisions, free from external influence and control.

"Regarding the alleged use of toxic chemicals as a weapon in Douma (Syria)...evaluation and analysis...of information gathered by the FFM (delaying its visit to the site for 11 days) provide(s) reasonable grounds that the use of a toxic chemical as a weapon has taken place on April 7, 2018."

The so-called incident was fake, a US/NATO-staged false flag, Syria wrongfully blamed for a victimless nonevent.

No one in Douma died, was hospitalized, or became ill from exposure to chemical or other toxins.

Local eyewitnesses and medical personal debunked the falsified narrative. Russian technical experts found no evidence of chemical or other toxins in soil samples and other analysis of the site.

Yet the OPCW FFM falsely claimed what didn't happen. At the time, Russia slammed the "fabricated" account of the alleged incident.

Throughout years of US-launched aggression in Syria, using ISIS and likeminded jihadists as imperial foot soldiers, supported by Pentagon-led terror-bombing since 2014 - not a shred of credible evidence ever suggested use of banned chemical or other toxins by Syrian Arab Republic forces against anyone.

On Saturday, based on email information supplied by an OPCW whistleblower, WikiLeaks slammed "a redacted version of (its Douma) report...misrepresent(ing) the facts" on the ground, adding:

The whistleblower said "this misrepresentation was achieved by selective omission, introducing a bias which undermines the credibility of the report."

Material was redacted "at the behest of the Office of the Director General." The alleged incident was based on reports by (al-Qaeda-connected White Helmets) that were present in Douma at the time."

The OPCW falsely claimed to find the presence of "chlorine, or another reactive chlorine-containing chemical" at the incident's alleged site.

Chlorine is the major ingredient of widely used household bleach.

"One piece of evidence, which was shown on news networks across the world, was a video said to show victims being treated in a hospital in the aftermath of the attack in Douma."

"The symptoms shown were, however, not consistent with what witnesses reported seeing that day. A detailed discussion of this was apparently omitted from the redacted version of the OPCW report."

The condition of so-called cylinders in Douma were "not consistent with having been dropped from the air..."

Fabricated "physical evidence, including (alleged) bodies of the deceased (and hundreds) seriously affected by a weaponized chemical gas (is) no longer available."

WikiLeaks editor Kristinn Hrafnsson said information provided by the OPCW whistleblower "casts doubt on the integrity of the OPCW," adding:

"Although the whistleblower was not ready to step forward and/or present documents to the public, WikiLeaks believes it is now of utmost interest for the public to see everything that was collected by the Fact Finding Mission on Douma and all scientific reports written in relation to the investigation."

"The convincing evidence of irregular behavior in the OPCW investigation of the alleged Douma chemical attack confirms doubts and suspicions I already had," adding:

"I could make no sense of what I was reading in the international press. Even official reports of investigations seemed incoherent at best. The picture is certainly clearer now, although very disturbing."

As Bush/Cheney regime's under secretary of state for arms control and international security affairs in 2002, John Bolton orchestrated Bustani's removal as OPCW director general before his term expired - because he wasn't serving US interests by fulfilling his mandated obligations.

Reportedly at the time, he urged Saddam Hussein to join the OPCW and permit unrestricted inspections of purported CW storage areas.

If he succeeded, it would have been an added obstacle to phony Bush/Cheney WMD claims used as a pretext for naked aggression. Iraq's US-installed puppet regime joined the OPCW in 2009.

The panel formed to review OPCW claims about the alleged Douma incident called upon the organization to let "all inspectors who took part in the Douma investigation to come forward and  (explain) their differing observations in an appropriate forum of the States Parties to the Chemical Weapons Convention," WikiLeaks reported.

"(C)onfirm(ation) (of) the use of sarin, a nerve agent, at the 4 April incident in Khan Sheikhoun in Syria" was falsified.

The JIM conducted its so-called fact-finding mission in absentia - never visiting Kahn Sheikhoun, not getting a firsthand, on-the-scene account of events from reliable sources.

At the time, Syria's Foreign Ministry slammed OPCW conclusions it called "fabricated (and) misleading...(likely) written and prepared in advance by certain circles that are hostile to Syria."

Sources the JIM cited were connected to US and UK intelligence. Syria eliminated its entire CW stockpile. No evidence suggests otherwise.

The OPCW is complicit with US aims to blame Syria for CW incidents it had nothing to do with - cooking the books to falsely claim otherwise.