A Predictable Coup in Bolivia

In the streets of Bolivia, Pravda.ru has talked to opponent civilians and policemen, among others: "Civilians, with policemen and some military, are advancing a coup." Active protesters have seen hidden policemen being transported by ambulances, maybe from other parts of the country: is the government preparing a siege? 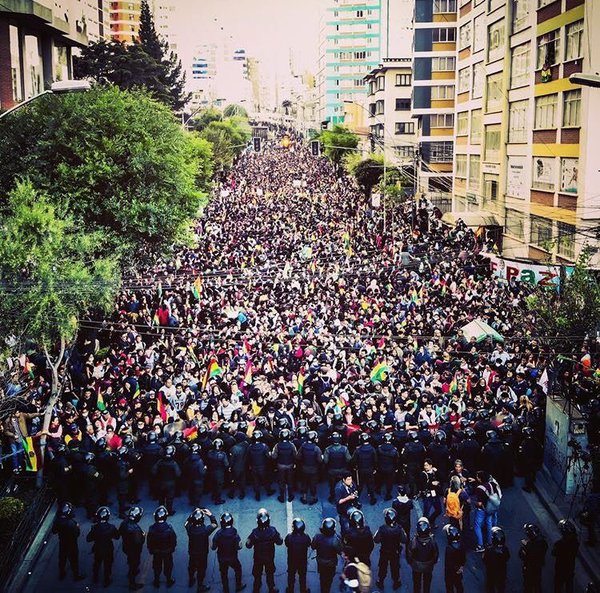 "We have seen hidden policemen, being transported by ambulances," said to Pravda.ru in Santa Cruz de la Sierra city last Wednesday two active protesters, opponents to the Bolivian President Evo Morales. At 24 de Septiembre Square, they started then to discuss between them, in a tense way, the possibilities of that atypical transportation in Bolivia's most tense days in the last 16 years, as violence and terror are spreading all over the country.

On the following day, two policemen in the same place, where everything happens in Bolivia's richest city, confided to Pravda.ru: "Civilians, with policemen and some military, are advancing a coup." According to them, the perpetrators of Morales' overthrown are well aware that would lead to a bloody confrontation across the South American country. "The government will call the military to take to the streets, many will be killed."

There haven't been cars in the streets since Wednesday's midnight, nor trade. Workers' Union across the country called Central Obrera Departamental, linked to Movement toward Socialism (official party), have been close since then, too. Government institutions have their employees before closed doors: theoretically open to the public. Hidden behind guards, and deep fear. Tension and fear, two words to define Bolivia for the last five days.

When Pravda.ru was finishing the talk to the two opponent guys, a so strange siren started to ring.

- A siren is ringing... said a protester to his partner, lifting his eyes and moving his head.

- So, what is this? Said the other, concerned but confident of themselves.

Talking to opponent civilians, one sees a high tension in their countenances, and their expectancy that death may be close.

On Thursday evening, religious leaders and their followers started taking to the streets. At 24 de Septiembre Square, a group of evangelicals was praying and praising God. "May the Bible enter the Justice Court!" prayed the pastor. Questioned what they were doing there, a Mandamiento de Deus (God Commandment Church) member answered to Pravda.ru: "This government is against religion, want to close churches. They do not want people to attend churches."

Of course, "the Bible to enter the Justice Court" means Evo Morales' overthrow now, even if his main opponent in the last presidential campaign, Carlos Mesa, does not have any project to improve the terrible Bolivian justice system. Neither Mesa said anything about this when vice-president (2002-2004), nor did nothing when the president for six months (2004).

This reporter has observed, long ago, a coup being conspired in Bolivia having religious leaders as one of its main perpetrators. It has been clear, among other things, in private talks to this sector of the Bolivian society. The more the elections came closer, the more it became clear to this author.

Religious leaders have cooperated to aggravate hatred and social division in Bolivia. They are used to inquiring people who attend churches - especially, those who privately talk to them - about their political views, being hostile against pro-Evo Morales opinions, aggressive many times. A large part of big lies come from this sector, which so strongly manipulates telling, many times, surreal stories involving the government, and Evo Morales.

Sunday morning, the General Vicar of the Archdiocese of Santa Cruz de la Sierra, Juan Crespo, said at the Cathedral located at 24 de Septiembre Square that the Electoral Court has provoked an uncertain and dark future to Bolivia: according to him, due to a fraud which re-elected President Evo Morales, for the fourth time. "Those [officials] responsible for the action of administering this democratic act [counting the votes], has not lived up to the Bolivian people."

So this scenario is not surprising - repeating the coups all over Latin America in the past, and Brazil in 2016 against Dilma Rousseff, having religion as a tool to manipulate people behind political interests.

Minutes before, a group of protesters had passed by the street in front of that square marching toward Christ the Redeemer statue around 700 meters from there, the bigger concentration of protesters in Santa Cruz de la Sierra where protesters block trafficking. They shouted and carries posters saying, "no a runoff. Evo Morales, out!" The marchers, a group of around 50 people, were applauded by the people at the square - around 130 people.

So in a few days, the so-called fight for democracy has been changed for an open fight for the president's overthrown. No matter how.

There is no sign that the general strike, called a Civilian Strike (Paro Civico) across Bolivia, will finish.

The local government is not going to cede, that is, achieve a runoff neither resign. The opposition neither is going to give up.

This Sunday afternoon (La Paz time), President Evo Morales declared that there is a coup attempt against him, "the next week," he said. "They are saying that it will be until Tuesday."

Carlos Mesa incites more manifestations and calls out people all over the country not to stop the so-called Civic Strike. No one word about violence many of his voters are perpetrating. That is, the Morales' opponent is indirectly inciting more violence among the Bolivian people.

Two hours later, opponent leaders of Potosi, Chuquisaca, and Tarija called out a national strike and a siege to every government institution, including the Presidential Palace. Sunday morning, Morales had threatened to siege the many cities all over the country on Civic Strike.

It seems, from the beginning of this so-called Civic Strike (to this reporter, long ago), that there is no escape to Bolivia but a too violent confrontation. Talking to families, too, the only sense here is that things will end up in violence out of control.

All that remains is to wait for the week to begin, in a country completely stopped and filled with fear and uncertainty.