Joe Biden: Over his head, out of his depth

Joe Biden: Over his head, out of his depth 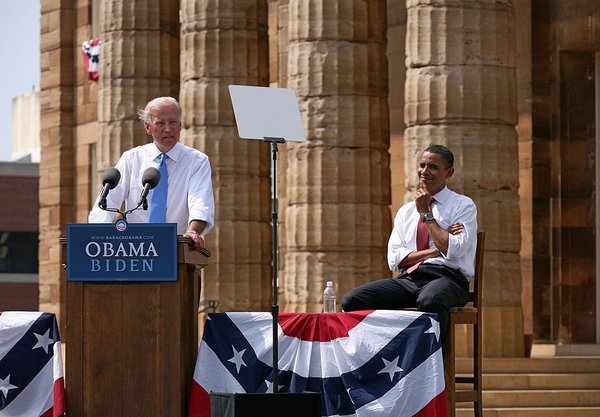 After years of Russophobic insolence and diatribes and after his family's recent history in Ukraine was exposed for all to see, it is crystal clear who and what Joe Biden is: in a word, unfit for office as POTUS. He should not take himself too seriously...

In constantly pressing the anti-Russia button, Biden is following a line which has become hackneyed to the point of ridicule. It is a line which is popular among those of his generation, growing up in the shadow of McCarthyism, those who belong to the yesteryear of international relations, whose generation created the hell-hole which is planet Earth today. They believe that if you want to control someone, all you have to do is to make her/him afraid. This involves creating ogres and monsters, non-existent enemies, creating a strong image of "them" to justify "us" and tell people that if they vote for you, then you will keep them safe and they can go back to their political slumberland drooling over a can of beer as they watch Barney belching on The Simpsons and curl up giggling. They then sidle up to the military-industrial complex and create hotspots to create conflict and sell weapons acting at the same time as a portal for the interests of the Lobbies, the BARFFS (Banking, Arms, eneRgy, Finance, Food, drugS).

Not surprisingly, Biden uses this approach, so popular among those who look for Reds under their Beds every night and who believe that 17 Russians were smarter than 300 million Americans at the last election. Soon he will be claiming that Russia is behind a massive campaign to discredit his candidacy for the Presidency.

In fact, Biden is perfectly capable of doing all that by himself. We are speaking of the man who went to Kiev to lecture the Ukrainian parliament on corruption, then lo and behold guess whose son suddenly finds himself as a bigwig in the Ukrainian energy scene? Like, what a coincidence. This, after the illegal Putsch which ousted the democratically elected President (Yanukovich) amid acts of terrorism (so often the modus operandi of the USA).

Here stands the man who has referred to Russia and its President in derogatory terms, with sheer insolence, scare-mongering, projecting lurid images without a shred of evidence. Perhaps he cannot remember the four-letter word, Iraq, with which his country is indelibly associated.

Perhaps Joe Biden cannot remember the shocking acts of torture at Abu Ghraib prison in Iraq where people were subjected to medieval-style abuse after being detained without trial. Perhaps if he wants to disassociate himself from Iraq, then Joe Biden has forgotten the role his country played in Libya when he was Vice-President, sending the country with the highest Human Development Index in Africa back to the stone age, fragmented, dangerous, crawling with terrorists and hosting open slave markets.

Perhaps Joe Biden has forgotten the role the USA and its yapping chihuahuas have played in Syria, training, aiding and arming terrorists and then maybe he has forgotten the deplorable acts carried out by terrorist groups in this country, slicing the breasts off nuns before raping them, playing soccer with the heads of little girls who were raped before and after decapitation and after being forced to watch their parents being tortured to death.

So perhaps Joe Biden should mind his own (rude word) business, STFU, and realise that he reached his Peter's Principle of incompetence as number two to Barack Obama. Biden was not born to be a leader, he was not born to get anywhere near the Presidency because he has never had what it takes - one only has to see him floundering around on a stage being conceited, arrogant, rude and insolent. He is over his head, out of his depth. He is a has-been without ever having been.

Joe Biden, in short, is a confused, dangerous, Russophobic guttersnipe out of line with the hearts and minds of his people. Americans today want to be part of the international community, Americans today do not want wars and confrontation, they want peace, development, education in a globalised world of brothers and sisters. They want to embrace Russians, not glower at them through a sight of a gun.

Perhaps it is time Joe Biden did not take himself too seriously...