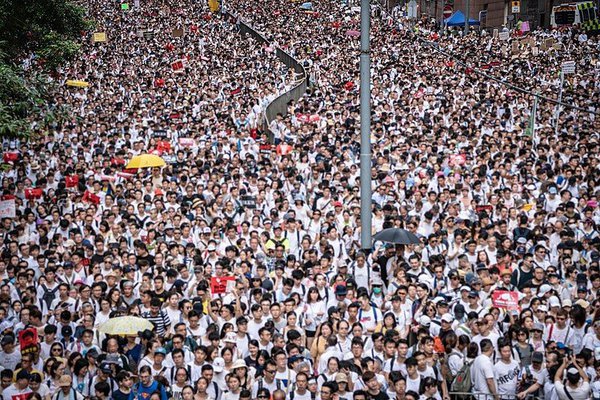 US dirty hands are all over months of protests in Hong Kong, including orchestrated violence and chaos, targeting China's soft underbelly.

Opposition elements met with House Speaker Pelosi and Pompeo in Washington. They also met with US lawmakers in Montana and with a US consulate official in Hong Kong.

Beijing has largely let Hong Kong police and security forces handle things. On October 5, the South China Morning Post reported that a "wave of destruction le(ft) businesses picking up pieces as (the) city braces for another weekend of unrest," adding:

Hong Kong is "reel(ing) from" what's going on. Numerous security forces have been injured along with demonstrators, only one death reported since protests began last March.

Given the intensity and duration of US-orchestrated anti-government violence and chaos since June, Hong Kong security forces have been far more restrained than what might be expected.

"Corruption in the public and private sectors" is widespread, including "a deeply entrenched patronage network," adding:

"(T)he Iraqi government failed to implement anti-corruption laws effectively, and public officials engage in corruption with impunity. Bribery and giving gifts to 'get things done' are widespread practices in Iraq, despite being illegal."

Iraq's judicial system...is plagued by corruption and political interference...There were reports of investigations of corrupt judges."

"Interior Ministry and Justice Ministry employees often extorted bribes from detainees to release them even if the courts had already accorded them the right to be released."

Police corruption is widespread throughout its chain of command. "Corruption and impunity are...serious problems within Iraq's security apparatus..."

The same goes for Iraqi public services. Its "public administration is...corrupt, weak and inefficient. The institution is plagued by nepotism, politically motivated appointments, and payroll corruption."

"In a widely published corruption case, several Iraqi high-ranking officials including senior officials at the oil ministry, such as ex-oil minister Hussein al-Shahristani, have been accused of receiving bribes from large corporations in return for winning business."

The report covers many more examples of widespread corruption in Iraq, the nation's wealth used to enrich US-led Western interests and the nation's privileged class at the expense ordinary people.

That cuts to the heart of why protests erupted on Tuesday. What began peacefully turned violent in response to repressive actions by security forces, using lethal force, polar opposite of containment tactics in Hong Kong.

Reportedly in the past four days, 60 or more Iraqis perished from live fire by military force snipers on rooftops overlooking Baghdad's Tahrir Square, another 1,600 injured, according to the Iraqi Human Rights Commission.

One demonstrator unnamed for his or her safety said: "There's no electricity, no jobs. People are dying of starvation, and people are sick. It is a curse."

On Friday, senior Shiite spiritual leader Grand Ayatollah Ali al-Sistani said "(t)he government and the political sides have not fulfilled the demands of the people to fight corruption" and provide vital public services.

An unnamed jobless protester said "(i)f the government is not dissolved, we will avenge our martyrs."

Recent Times headlines on Hong Kong Protests were as follows:

"Is China Heading for Crisis? The protests in Hong Kong accelerate the contradictions in Beijing"

The above headlines and many others like them ignore US-orchestrated violence, war on China by other means - along with trade war unrelated to trade, and hostile US incursions by Pentagon warships and aircraft near Chinese territory.

Compare the above Times' headlines to its coverage of protests in Baghdad:

"Iraq Struggles to Contain Wave of Deadly Protests" - largely blaming demonstrators for violence ordered by the US-installed regime against ordinary Iraqis, demanding essential to life and welfare public services from the oil-rich country, with the world's 5th largest reserves.

"Two Killed in Anti-Government Protests - injuring more than 200, according to (unnamed) officials"

"Thousands in Iraq Protest Corruption - Police in Iraq use tear gas and rubber bullets...in some cases by live ammunition"

What began in Baghdad spread elsewhere in the country, protesting against hugely corrupt and repressive rule, ordinary Iraqis exploited and otherwise abused, their fundamental rights ignored.

In Iraq, ordinary people are largely blamed for regime high crimes committed against them.

It's been this way since the US installed pro-Western puppet rule, following Bush/Cheney's 2003 aggression.