The Truth Behind Alexander Acosta's Resignation

The Truth Behind Alexander Acosta's Resignation 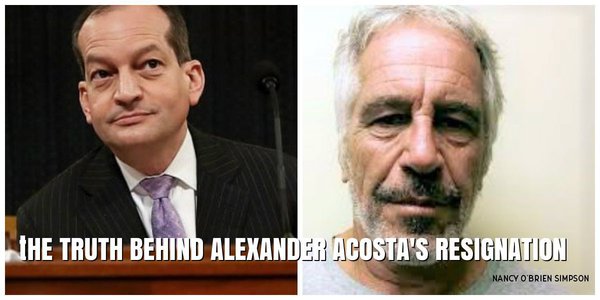 The Jeffrey Epstein File has myriad tentacles of political intrigue, machinations and just plain evil at the highest levels.

By now everyone knows about the sweetheart deal that Jeffrey Epstein received in 2008. The FBI had the goods on Epstein.  Their investigation of him was nicknamed "Operation Leap Year" and resulted in a 53-page indictment that could have put Epstein away for life.  It could have stopped the child trafficking and saved hundreds of children.  Instead, it was put on the shelf and never presented to a grand jury.

No, never presented to a grand jury rather, Alexander Acosta, then the U. S. Attorney for the Southern District of Florida and Alan Dershowitz Epstein's attorney cooked up a sweetheart of a deal to keep Epstein and his trafficking operation in business.  Epstein would be granted immunity from all federal criminal charges. And, even more bizarre they added to the deal that the four named co-conspirators and any unnamed "potential" co-conspirators would be immune from all federal charges.  This is mindblowing.  Any "potential" child traffickers could never be indicted on federal charges of child trafficking in connection with Epstein?  That needs to sink in and be headline news on a continuous loop.  This is the justice system in the United States of America.

According to the Miami Herald, the non-prosecution agreement "essentially shut down an ongoing FBI probe into whether there were more victims and other powerful people who took part in Epstein's sex crimes". At the time, this halted the investigation and sealed the indictment. The Miami Herald said: "Acosta agreed, despite a federal law to the contrary, that the deal would be kept sealed."

Acosta's keeping the deal sealed is considered by many illegal and unethical. The Miami Herald describes an email from Epstein's attorney after an irregular off-site meeting with Acosta: "'Thank you for the commitment you made to me during our Oct. 12 meeting,' Lefkowitz one of Epsteins's attorney's wrote in a letter to Acosta after a breakfast meeting in West Palm Beach. He added that he was hopeful that Acosta would abide by a promise to keep the deal confidential. 'You ... assured me that your office would not ... contact any of the identified individuals, potential witnesses or potential civil claimants and the respective counsel in this matter,' Lefkowitz wrote."

The Herald article contended that certain aspects of Acosta's non-prosecution agreement violated federal law. "As part of the arrangement, Acosta agreed, despite a federal law to the contrary, that the deal would be kept from the victims. As a result, the non-prosecution agreement was sealed until after it was approved by the judge, thereby averting any chance that the girls - or anyone else - might show up in court and try to derail it."

"potential" traffickers.  The powerful protect their own.  This can be seen in all the

On April 27, 2017, Acosta was confirmed as Secretary of Labor by the U.S. Senate in a 60-38 vote. He received the support of only eight Democratic Senators while all Republican senators voted for confirmation.  These senators knew Acosta's history with Epstein, they knew about the sweetheart deal and it appears they simply did not care about the kids being trafficked.  Just like the A-listers that attended his parties and hung with him.  The powerful avert their eyes and dance with the devil if he travels in the right circles.

Add to the mix a Daily Beast article by investigative journalist Vicky Ward who quotes a former senior White House official who reports during his interview with President Donald Trump's transition team Acosta said: "I was told Epstein 'belonged to intelligence' and to leave it alone." If one knew that children, perhaps hundreds of underage children were being sexually abused and trafficked, would you simply turn your back and walk away if someone told you that they were being used for "intelligence" purposes?

Ah, but it gets even more, dare we say ...diabolical.  One of the first things Acosta did in his new position as Secretary of Labor was to propose 80% funding cuts for the government agency that combats child sex trafficking, The International Labor Affairs Bureau. That agency combats human trafficking including child sex trafficking), child labor and forced labor internationally. The ILAB's budget would fall from $68m last year to just $18.5m in 2020. The proposed reduction was so draconian that experts said it would effectively destroy many federal efforts to curb sex trafficking and put the lives of large numbers of children at risk.

"Today, in an Appropriations Committee Hearing, Vice Chair of the House Democratic Caucus Congresswoman Katherine Clark (MA-5) questioned Labor Secretary Alexander Acosta on whether he is fit to oversee the Department of Labor based on his history of siding with the powerful over the victims of exploitation and his proposal to cut programs that are meant to protect workers and survivors."

Clark questioned Secretary Acosta's loyalty to the Department of Labor's mission. "One out of seven runaways are likely child sex trafficking victims, and there are estimates that hundreds of thousands of adults and children are victims of sex and labor trafficking in the US," said Clark. "And yet, you proposed a budget cut of 79 percent to the International Labor Affairs Bureau (ILAB), a cut of $68 million to just $18.5 million. But this isn't the first time you've ignored human trafficking, is it?"

The democrats were so outraged by this wanton act of sabotaging the government's ability to stop child trafficking they demanded Acosta step down.  They said it was a pattern with Acosta, enabling the trafficking of children to continue unimpeded.

The battle over the future of the cuts to child trafficking budget is ongoing. Acosta's proposed cuts were imported into Trump's $4.7tn, released in March, which contains several Republican goals including extra money for the military and funding of the border wall.The Democrats have responded with a 2020 House Budget that passed in June. It would see child trafficking resources expand to $122m.

You have to wonder about powerful men like Alexander Acosta.  How do they sleep at night?  Do they even have a conscience?  When did they get so powerful that protecting someone like Jeffrey Epstein was cool?  When did they get so craven that slashing the budget so child traffickers could continue their abuse of children was okay?  Why would Donald Trump make him Secretary of Labor when he knew about the enabling deal Acosta had cut with Epstein.  How did all those Senators confirm Acosta to the exact job he never should have had?  How and why did Donald Trump take that slashed budget from Acosta and put it in his own budget?

Ms. Simpson was a radio personality in New York.  She was a staff writer for The Liberty Report.  A PBS documentary was done on her activism for human rights.  She is a psychotherapist and political commentator.